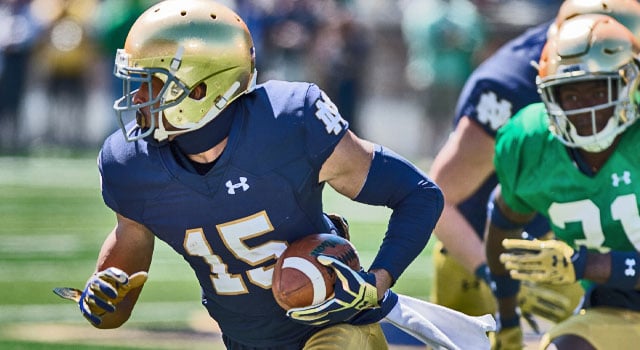 Corey Holmes emerged in the spring for Notre Dame. Can he follow that up on the field in 2016? (Photo: Matt Cashore // USA TODAY Sports)

Corey Holmes was a 4-star wide receiver prospect hailing from Fort Lauderdale, Fla., with a strong list of scholarships offers.  The Florida native was coveted by last year’s ACC representative in the national championship game, Clemson, as well as in-state powers Florida and Florida State.  UCLA made a serious push for the talented pass catcher but the multiple visits Holmes made with his father to South Bend ultimately won the day for Notre Dame in signing yet another one of head coach Brian Kelly’s “right kinda guys.”

“I really like Notre Dame because if I were to go there I would be surrounded by guys who want to get their degrees and graduate, but also win national championships,” Holmes said upon his commitment.  “The education I will receive there is among the elite academic programs in the country and that means so much to me and family.”

The biggest reason Irish fans should be excited about Corey Holmes is because he’s a tremendous athlete.  And while “tremendous athlete” may be an overused term in football parlance, it truly fits the bill for Holmes.

Standing a lengthy 6-foot-1 and weighing 190 pounds, Holmes has coveted size for a slot wide receiver, but it’s his size combined with his speed and quickness that make him a potentially dangerous player at Notre Dame’s Z position.  Holmes ran the 40-yard dash this spring in 4.39 seconds, good enough to be the fastest on the team and in the same ballpark as Will Fuller’s NFL Combine-leading 4.32 second time.  More importantly, as reported by the South Bend Tribune, Holmes recorded an unbelievable 3.85 second time in the 20-yard shuttle – a football drill that measures the ability to quickly change directions – a time that would have placed him second overall in this past year’s NFL Combine.

Corey Holmes’ combination of size, speed and short area explosiveness makes him a perfect specimen to be a lethal Z wide receiver for Notre Dame.  To put his athleticism in perspective, it was not long ago Roby Toma occupied the Z while standing 5-foot-9 and boasting a 4.5 40-yard dash.

As exciting as combine scores can be, there’s a reason NFL teams look beyond them and toward game film.  Roby Toma may not have been the greatest athlete but he produced, highlighting one of the weaknesses of using athleticism as a predictor and the first reason to doubt Corey Holmes: track speed doesn’t always translate to game speed.

“There’s track speed and there’s inline, straight-line speed, and then there’s, quite frankly, football speed,” Brian Kelly explained when discussing Corey Holmes.  “And I think that’s been the struggle with Corey the first couple of years, is to get that to translate.”

Another reason to be cautious regarding Holmes’ 2016 season is his lack of experience.  Despite shooting off the charts on athletic measures he has failed to record a single reception in his first two years in a Notre Dame uniform.  Holmes made appearances in two games as a freshman before spending the reminder of the season on the scout team, and in 2015 regressed to the point he was given a redshirt for an extra year of seasoning.  To complicate matters further, while Holmes was redshirting as a sophomore true freshman C.J. Sanders was dazzling fans with his own displays of athleticism, including a much-needed 93-yard kickoff return for a touchdown against Stanford.

There are valid reasons for anyone who falls into the camp that Holmes is unlikely to have a breakout season.  After all, it’s hard to predict what a wide receiver is capable of producing when he has yet to produce anything at all heading into his junior season.  However, all signs are pointing toward Holmes playing a critical role in Notre Dame’s offense this fall in the slot.  It’s not just that he’s so athletic he’s already out-testing players recently drafted into the NFL – it’s that he appears to want to be great.

“It really humbled me,” Holmes told the media this spring about being forced to watch on the sidelines last fall.  “That’s when I had the talks with my dad who reminded me everything happens for a reason.  What I told myself was I can’t worry about other people.  I’ve got to worry about myself, worry about how I’m going to better myself as a player.”

Holmes took that attitude and transformed it into a spring performance that drew praise from Notre Dame’s coaching staff.  The talented Floridian always had the talent – he just needed the mentality to match.

Look for Holmes to become a go-to wide receiver for Notre Dame this fall and to produce the kind of jaw-dropping plays that leave Irish fans wondering what took him so long to get on the field.