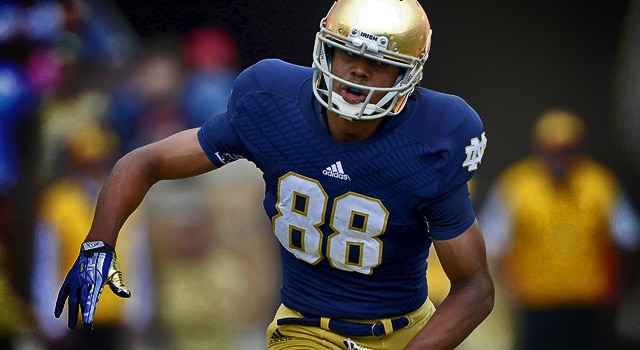 UHND continues its series outlining breakout candidates for 2014 as Notre Dame begins its fall practice regimen at Culver Military Academy in Culver, IN.  This particular session will remain on the offensive side of the football and examine the depth at wide receiver.  UHND has previously detailed the possible emergence of wide receiver Will Fuller, and today we will look into another wide receiver candidate, Corey Robinson.

Corey Robinson’s path to Notre Dame was an unorthodox one.  The son of NBA Hall of Fame inductee David Robinson, Corey was an unheralded, under the radar 3-star recruit.  The San Antonio native did not play one down of football prior to his freshman season and spent his prep career at a tiny Christian high school whose football program was in its infancy at roughly one decade old.

Despite such obstacles and perceived limitations, Notre Dame head coach Brian Kelly offered a scholarship to the raw Texas wide receiver to the surprise of many recruiting outlets.  Notre Dame’s offer was the first major one Corey received, yet by the time of the U.S. Army All-American game – where the young Robinson went toe-to-toe with the nation’s best high school athletes and thrived – Corey had been upgraded by Rivals.com to a 4-star player and began adding offers from the likes of Iowa and North Carolina.

Brian Kelly and staff were among the very first to recognize Corey Robinson’s potential, and the relationships developed by Notre Dame’s early scouting led to Robinson’s pledge to play his Saturdays in South Bend.

Why Corey Robinson Will Break Out

If the younger Robinson experiences a breakout campaign it will be largely built upon the foundation created during his freshman season.  Measuring at 6’4” and 215 pounds, the Texas pass-catcher is difficult for opposing defenses to account for with his towering frame.  When Robinson’s reputation of owning some of the best hands on the team is added into the mix, Robinson’s status is elevated from difficult to matchup nightmare.

Kelly raved about Robinson’s production during fall camp prior to the 2013 season.  “He consistently catches the football, it doesn’t matter who he goes up against,” Kelly told the media.  “If the ball’s put in the right position, he comes down with it.”

If evidence was needed to warrant such praise by Notre Dame’s head coach, Robinson was ready to supply it, as members of the media were able to witness former Bednarik Award watch list cornerback, Bennett Jackson, repeatedly struggle to contain Corey during practice.

Corey managed to earn his way into the rotation his freshman year and provided several clutch performances.  He earned 54 tough yards against eventual Rose Bowl Champion Michigan State in their only loss of the season, as well as a critical 22-yard reception against eventual Pac-12 champion, Stanford.  His potential flashed its brightest with a 35-yard touchdown reception against Air Force when, with tight coverage, Robinson managed to leap over his defender, make the catch and maintain his balance for the first touchdown of his collegiate career.

The biggest obstacle to Robinson’s rise to stardom is the crowdedness of the wide receiver position, which is arguably the deepest unit on the team.  Classmate Will Fuller is also on UHND’s watch list to emerge as the number two wide receiver behind DaVaris Daniels.  Fuller impressed enough to see playing time as a freshman in 2013 and managed to outgain Robinson in yardage despite having fewer catches.

Sophomore Torii Hunter Jr. should also make his debut for the Fighting Irish this fall.  Despite not playing his freshman season due to a broken femur, buzz has managed to shadow Hunter everywhere he goes, starting his senior year of high school after winning MVP honors at Nike’s The Opening camp.  Former captain T.J. Jones did not hold back when describing what he witnessed from Torii, telling the media that Hunter “could be one of the greats to come through here.”

When the depth chart is considered, as well as the emergence of Notre Dame’s rushing attack with a trio of talented running backs in Cam McDaniel, Tarean Folston and Greg Bryant, Robinson will face obstacles to achieving a breakout season.

The competition for breakout status within Notre Dame’s wide receiver corps will be intense, but Robinson’s physical gifts make him as well equipped as anyone to handle the load.  Whether Corey Robinson emerges this season or another one of his peers, the true winner will be Notre Dame’s increasingly dangerous offense.