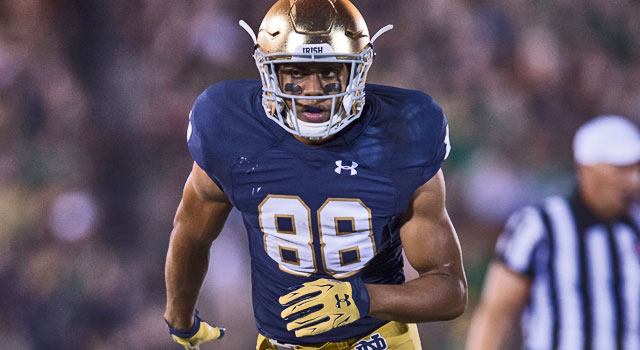 Last week, Corey Robinson announced his decision to retire from football due to an accumulation of concussions and will take up a student assistant role within the football program. Generally speaking, whenever a player chooses to retire due to injury or the effects of an injury, it is universally lauded by the public. Such was the case with Robinson; you couldn’t find an article, a message board post, or anything from his teammates showing any sort of derision or cynicism regarding his choice. By all accounts, he took all the necessary steps to try and remain on the team, but at the advice of his doctors, leaving the game was the prudent choice.

It would seem fair to say that his departure from the football team is seen as no big deal, which on the face of it would seem surprising given his 65 career catches and seven career touchdowns. Yet, the notion is in fact warranted. He saw a considerable drop in his play last season–16 catches, 200 yards, and one touchdown, big dips from his 40 for 539 and five in 2014–and given the amount of talent Notre Dame has accumulated at the receiver position the last couple of recruiting cycles, there was the growing sense that Robinson was beginning to be phased out anyway.

When Robinson’s role of Student Body President is taken into account, which was sure to put a strain on his time and attention towards football, it’s understandable that reaction would steer clear of lament from the fans, unlike when Steve Elmer’s departure left Notre Dame without a starting right guard. Robinson just isn’t seen as that big of a loss to the team.

In this sense, Robinson’s contributions to the football team have been seriously underrated. Let’s be honest, when he arrived on campus in 2013, he had as little fan fare as one could have. He didn’t create a lot of buzz as a recruit–not that he should have, it’s just a fact–yet, he was able to force his way into the receiver rotation and make some meaningful contributions. During his three years as a player at Notre Dame, he had a knack for making plays in some clutch situations, a fact that has been missed over the last week or so. There have been numerous, well-written pieces about Corey Robinson the person over the last week, but I thought it would be fair to highlight some of the key plays that he contributed to as a player.

This was quite easily Robinson’s best game of his Notre Dame career, and what a game it was: Eight catches, 99 yards and two touchdowns against the defending national champions on the road, including a leaping grab over eventual #5 pick Jalen Ramsey in the corner of the end zone. He also scored the would-be game winning touchdown on another fourth down play, but we all know why that didn’t come to fruition.

His biggest play that counted was his fourth and 18 reception, with his quarterback scrambling across the field and the game on the line. The play extended the drive and gave the Irish a chance to take the game from the Seminoles before the officials decided that wasn’t going to happen.

What people remember about this game is the Everett Golson to Ben Koyack touchdown play on 4th down that ended up being the winning play, but Robinson’s play was just as important. The Irish were down 14-10 and had the ball at their own 41. Notre Dame possessed all three of it’s timeouts at the time and if they didn’t convert there was a very real possibility they would be forced to punt and hope to hold Stanford with it’s defense, something they were unable to do in the previous drive.

Robinson runs a skinny post and Golson whips a laser beam for 17 yards and the first down, extending the drive that ultimately led to the game winner. It should be noted that this play occurred on a windy, rainy day in South Bend, so while the play would be considered routine if not for the moment, it was anything but routine with the game on the line.

This leaping grab is more spectacular than it was important, but it did carry some serious game significance. Notre Dame was controlling the run of play against Syracuse, but Golson’s turnover issues started to rear it’s ugly head for the first time against the Orangemen and while Notre Dame were heavy favorites, they went to halftime with just an eleven point lead, 14-3. The Irish needed to put Syracuse away and an early touchdown would give the Irish a nice little cushion while providing the necessary discouragement to their counterparts.

On second down, Golson lofted a so-so fade that Robinson was going to struggle to high point. Despite being interfered with Robinson made a leaping, twisting reception that displayed just how athletic he can be with the ball in the air.

Notre Dame was again struggling with a weaker opponent in Purdue, up just three points going into halftime as double digit favorites. Despite again controlling the run of play, Notre Dame led by just three with four minutes left in the 3rd quarter and needing a touchdown to push it to a two score advantage. Enter Robinson to again sky high over two defenders on a very well-placed ball by Golson in the corner of end zone. Robinson takes the hit from the safety, gets both feet down and hangs onto the ball to secure a ten point advantage that the Irish would build on for a 30-14 victory. (RIP Greg Bryant, the first player to congratulate Robinson on his score)

This is the lasting image from Robinson’s career at Notre Dame, a diving game winning touchdown at home under the lights against their hated rivals. We should all be so lucky to experience a moment like that in our lives and it’s one that Robinson will likely remember forever. It had everything you’d want in a great moment: Robinson had struggled all season, many had even seen him as the goat against Clemson. There was tremendous game pressure as Notre Dame blew a double digit lead to USC, only to fight back and have the chance to take the lead again in the 4th quarter. It also had a high degree of difficulty; the defensive back was draped all over him and he was required to adjust his route to extend and snatch the ball. These were the types of catches that became the hall mark of Robinson’s game–leaping grabs at big moments in the end zone–and none were more important than this one against the Trojans.

Depending on your point of view, Robinson’s career is either a triumph or a disappointment, but there is no dismissing the plays he made and the moments he gave to the fans and his teammates.