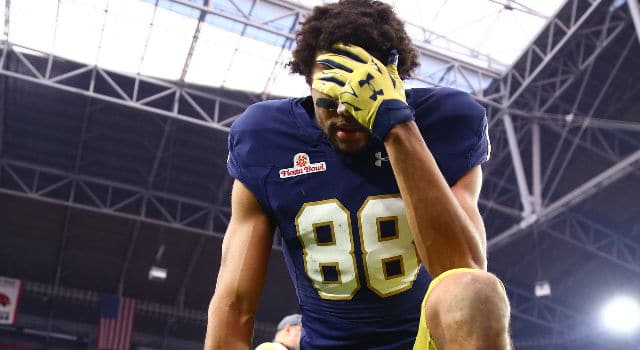 Corey Robinson’s brief but promising career on the football field came to a premature end on Wednesday when the senior to be hung up his cleats after battling through multiple concussions over the last three years.  While Robinson wrestled with the decision for months, in the end he made the obvious and smart decision to walk away.

If this were the 1980’s, Corey Robinson might not have even had a decision to make.  He may have been back on the practice field already.  With everything that we’ve learned about concussions – specifically related to football players – though, Robinson made the type of decision that not every 20 something year old senior to be, potential NFL player could make.

Not every player in Robinson’s shoes could have made the decision because very few possess the type of bright future away from football that Robinson has ahead of him.  Already the Student Body President, Robinson may have had a more promising career off the field ahead of him than he did on the field even without the concussion considerations.

Not all college seniors set to be a starting wide receiver on one of the best offenses in college football can say the same.  For some, football is their only opportunity for a better future.  For Robinson, football was one of many opportunities in front of him.

None of this is to take anything away from Robinson on the field. Heading into the 2015 season, I fully expected Robinson to be the next All-American wide receiver for the Irish.  We saw brief glimpses of the potential Robinson had to be a dominating presence on the gridiron – most notably his shining moment against Florida State.  For many, Robinson’s 8 catch, 2 (should be 3) touchdown performance against the Noles will be what they think of first when remembering Robinson’s career.

For others, maybe it’ll be the game winner against USC this past fall.  After Notre Dame lost it’s first half lead, Robinson hauled in a tough, 3rd down catch in the corner of the end-zone to put the Irish up for good in their 41-31 victory over the Trojans.  It was his only catch of the day and his only touchdown of the entire 2015 season, but it was a big one.

While his numbers might have fallen off in 2015, big things were expected of him in 2016 had he been able to continue his career.  Notre Dame will be replacing Will Fuller, Chris Brown, and Amir Carlisle this fall and Robinson was going to be the elder statesman of the group.

Unfortunately, he won’t get that chance – at least on the field. Robinson has said that he will be staying with the team throughout the season as a student assistant in much the same way Danny Spond did in 2013 when concussions forced him into early retirement as well.  When Spond did so he took then freshman phenom Jaylon Smith under his wing and tutored him all season.  Smith honored his mentor on Senior Day that year by wearing his number since he couldn’t.  Given how well respected Robinson among his peers, I’d be shocked if a young Irish wide receiver didn’t do the same this year.

While Robinson’s early retirement is indeed disappointing for all parties involved, he made the right decision in the end and it would be nearly impossible for anyone to argue otherwise.   Concussions are not a matter to be taken lightly anymore and at the end of the day, he had almost everything to lose and not much to gain by putting himself at risk for more serious and potentially permanent brain damage with another concussion.  Even if the Irish are able to go on another magical run like they did in 2012 and reach the College Football Playoffs, Robinson will have still made the right call.

Not every college football player could have done with Corey Robinson did yesterday.  For some, the allure of the NFL or the potential of a pay day in the pros would far outweigh concerns over lingering effects from multiple concussions or the possibility of permanent brain damage.   For some, they could even be pressured into continuing their careers despite the risks For some, they might not feel like they have a choice in the matter.  Luckily for Corey Robinson, he did and he made the right one.

Corey Robinson might not end his Notre Dame career ranked highly in the Irish record books but he will do so as the Student Body President, a scholar student, and a shining example of what it means to be a student athlete.  Sounds like an excellent Notre Dame career to me.