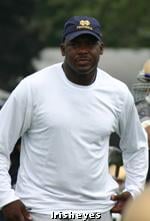 Corwin Brown was pretty fired up at his press conference yesterday according to Michael Rothstein’s Irish Insights blog.  When asked about Notre Dame’s lack of tackles for loss this year, Brown gave a lengthy response and ended it by saying he would love to see his defense kick Boston College’s teeth in.

“I’m not even going to get on a rant and rave so it can get all over YouTube. But I will say this. We’ve got good kids here. And we’ve got good people. And everybody wants to see us lose. So we get everybody’s best shot.

“And that’s what we want at the end of the day. Because when we start giving people our best shot, OK, we’re going to be hard to deal with.

Check out Rothstein’s post for the full text, but DAMN – it sounds like Corwin is a little fired up this week.  And he should be.  The Pitt offense ended up moving the ball with ease in the second half on the Irish defense without the threat of any sort of downfield passing game.  There was also numerous occassions where Irish defenders had chances to make plays but simply didn’t.

Corwin Brown is pretty widely loved among Irish fans for his recruiting prowress, but statements like the one he made yesterday will endear him to the Irish faithful even more.

Here’s hoping Brown’s attitude rubs off on the defense and they come out pissed off with something to prove Saturday night.

Quinn Still Doesn't Have a Defense