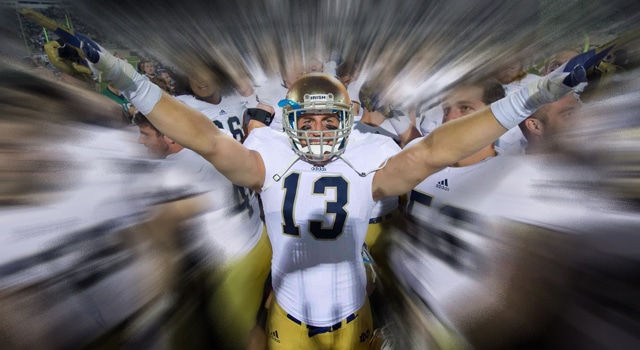 This year was supposed to be the year that Danny Spond took over the leadership of the Notre Dame defense and elevated his game in preparation for a potential NFL career.  Life doesn’t always go as planned though and instead of preparing himself for a career in professional football, Spond has spent this season helping preparing his teammates each week after his chronic migraines forced the Colorado into early retirement.

Throughout the season Spond has been an active participant for the Irish football team and has traveled with the team each week exemplifying the true spirit of Notre Dame football.  Fighting Irish Digital Media produced a video chronicling Spond’s unplanned season wearing a headset instead of a chin strap that is without a doubt must see TV for any Notre Dame fan.

After watching the video below you will see that Spond has as bright of a future as anyone on the 2013 Notre Dame roster even if he won’t hear his name called by Roger Goodell next April.