People say the only thing you can count on are death and taxes.  Well in 2015, Notre Dame football fans can add injuries to their Fighting Irish to that list after Notre Dame suffered two more injuries to key starters in last night’s win over Boston College.  Starting running back CJ Prosise and cornerback Keivarae Russell both left the win over the Eagles and appeared unlikely to play this coming weekend in the showdown with Stanford.

CJ Prosise, freshly off the injured list from his concussion and shoulder injury suffered two weeks ago against Pitt, was helped off the field in the first quarter last night after a rather forgettable performance.  It looked bad at first as it looked kind of like he had the dreaded “ACL limp” but it was later revealed that Prosise, still just shy of 1,000 yards on the season, suffered a high ankle sprain.  High ankle sprains are tough, usually lingering injuries that would be tough for a running back like Prosise to play through, but we’ll know more on his status later today and throughout the week.

Keivarae Russell meanwhile suffered a stress fracture in his foot which could keep him off the field next weekend as well.  Last year Cody Riggs suffered a stress fracture in his foot early in the season and was never quite the same but did manage to play through the injury most of the season.  Riggs, however, was limited throughout the season.  With that in mind, perhaps Russell could play a limited role next week as well but that might be a bit optimistic.

UPDATE: Russell actually has a stress fracture in his tibia and his injury recovery timeframe was listed as 6-8 weeks by Brian Kelly on Sunday afternoon.

Every team suffers injuries, but this year’s rash of them has really depleted the Irish as the season has worn on.  Don’t think that notion is lost on the CFP Committee though.  Notre Dame sustaining all of the injuries it has and managing to play to a 10-1 record with the lone loss coming on the road by two points to the #1 team in the country is certainly part of the resume that has Notre Dame currently sitting 4th in the CFP Rankings.

RELATED
Despite Departures, Notre Dame D-Line Could be Better in 2020

At this point, however, the Irish simply can’t suffer any more injuries and still hope to have a real shot should they make the playoffs.   If Cage, Russell and Prosise can’t go next weekend, Notre Dame will be playing a top 10 team on the road with its backup QB, #3 RB, #3 NT, backup CB, and backup TE.  That’s not necessarily a recipe for success. At the same time, it’s been one that Notre Dame has been able two win with throughout the season so we shouldn’t be surprised if they continue to do so – even if it doesn’t exactly look pretty at times.

Remember just a year ago Notre Dame had a laundry list of injuries that depleted the defensive line specifically and the Irish were not able to keep winning.  Notre Dame fell apart last November with ugly losses to Northwestern and Lousiville sandwiched between blowouts from Arizona State and USC.  So while this November hasn’t exactly been a November to remember with close wins over Pitt, Wake Forest, and Boston College, it has been at least to this point a perfect November in the W/L column. 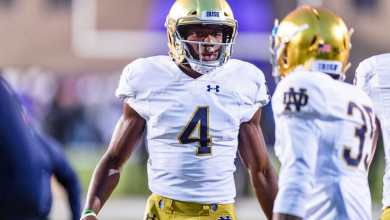