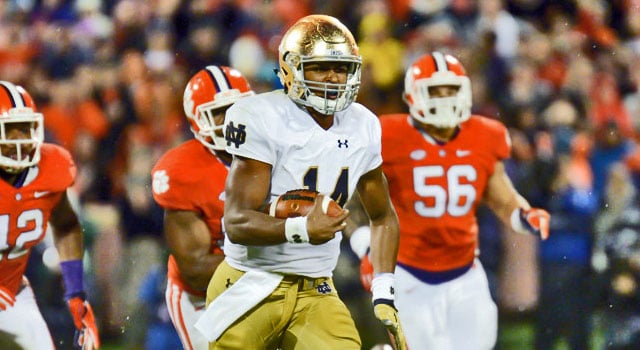 There were a myriad of reasons that Notre Dame’s bid for an undefeated season came to a premature end on Saturday night in Death Valley.  The play of redshirt freshman quarterback Deshone Kizer, however, wasn’t anywhere near the top of that list as the youngster continued to grow as Notre Dame’s quarterback – a role he was thrust into just three weeks ago after ending spring ball third on the totem poll.

Deshone Kizer, making just his third career start, took his team into a hostile environment last weekend and nearly willed them to victory after the Irish dug a huge deficit behind a game plan geared toward not making Kizer have to do much.  After the Irish fell behind 21-3 heading into the fourth quarter though, Notre Dame needed Kizer to do it all.

Kizer responded.  He rallied his troops with a furious comeback bid featuring three touchdowns over the final 15 minutes that came up just a yard short when Kizer was stuffed by the Clemson defense on a two point conversion attempt with seven second remaining.

The only reason Notre Dame was even in a position to tie the game that late was because Kizer didn’t flinch when the Clemson defense shut down the Irish running game and dared the second year player to beat them with his arm.  Kizer nearly did just that completing 19 of 34 passes for 321 yards and two touchdowns adding another 60 yards and a touchdown on the ground to pace the Irish running game.

Kizer turned in his first career 300 yard game despite a number of crucial drops by Notre Dame’s talented wide receiving – a group that struggled to reel in the ball consistently in Saturday night’s downpour in Memorial Stadium.  Brian Kelly noted on Sunday that the Irish left at least 125 yards on the field with those drops none of which might have been bigger than junior wide receiver Corey Robinson’s at the end of the first half that would have been a 49 yard touchdown with the score still 14-3.  Robinson would later add another drop on Notre Dame’s first failed two point conversion attempt that turned out to be critical when the Irish continued scoring in the final stanza.

Kizer had what could have been yet another touchdown fumbled away by Chris Brown in the fourth quarter as well when the South Carolina native coughed up the ball just outside the Tiger end zone with just over two minutes remaining and the Irish down eight at the time.

Now, Kizer was not without fault Saturday night.  Mid way through the fourth quarter Kizer made his own ill-timed blunder with an interception on a forced pass when he had CJ Prosise open for a shorter gain.  Kizer misfired on the sideline throw to Will Fuller that has given him fits now for two straight weeks.  After that interception, however, Kizer marched the Irish down towards the endzone two more times with the Irish coming away with just six points because of Brown’s fumble and their second failed two pointer.

At the end of the day, Kizer turned in one of the better performances from a Notre Dame quarterback on the road in a number of years.  Last year’s starter Everett Golson picked up a few impressive road wins during the 2012 campaign against Michigan State, Oklahoma, and USC but none of those environments can match what Kizer faced on Saturday and in none of those contests was Golson asked to rally his team back from such a deficit.

With the success Kizer had on Saturday and in his previous two starts, it’s easy to forget just how young and inexperienced the Ohio native is.  After all, Kizer spent all of 2014 third on the depth chart and received scarce snaps this spring as Golson and Malik Zaire duked it out for the starting job before Golson bolting for Florida State when it became abundantly clear that Zaire had a better than average chance of unseating him for the starting job this fall.  So Kizer is playing this well despite really just having one fall camp receiving many meaningful practice reps and even then Kelly and staff had to focus on preparing Zaire for being the starter with just one career start under his belt.

With Notre Dame’s season now already on the brink, the Irish will need Kizer to continue that rapid rise with a pesky Navy squad coming to town this weekend before arch rival USC comes to town armed with the confidence they rightfully have earned after last year’s Thanksgiving weekend embarrassment of the Irish.

Between now and then, however, Mike Sanford will be working with Kizer to continue to clean up his game starting this weekend against the Midshipmen.  Kizer still needs work on going through his progressions and his fourth quarter interception was a prime example of just that but hey, what redshirt freshman quarterback doesn’t need work in that area?  Kizer still needs a lot of work on that 10 yard out to Fuller as well.  The last couple weeks that pass has either been in the dirt or in the stands.

Despite the areas of improvement needed, what can’t be denied is that the biggest question mark on the entire roster right now provided one of the strongest answers of anyone on the Irish squad on Saturday night.  Notre Dame’s vaunted offensive line was neutralized at best and pushed around at times at worst.  The Irish ground game that had powered the offense through the first four weeks of the season was stuck in the mud in rain soaked Memorial Stadium.  And the Irish receiving corps that came into the season ranked as of the nation’s best couldn’t come up with critical catches that simply have to be made by a veteran group.

Kizer, however, was the most impressive player on the offensive side of the ball in just his third start.  The youngster was one of the most mature as well.  Following senior Chris Brown’s fumble just outside the endzone, Kizer made a beeline for his receiver talking him back up with the poise of a veteran.  Contrast that to the sideline and body language we saw last year from Golson and again, it’s hard to believe Kizer is just 19 years old.

If Notre Dame is going to keep its slim, but still existent, playoff hopes alive, Kizer will have to continue to elevate his game from the level we saw on Saturday because the blueprint has been given to opposing defenses on how to slow down this Irish offense.  Stack the line and force the Irish to go vertical.  It would be a shock if USC didn’t come into town in a couple of weeks with the same gameplan to bottle up the Irish running game until the passing game makes them pay.

Brian Kelly and his offensive staff appeared to not want to put the game on Kizer with their first half play calling that featured a steady dose of running the ball.  Ironically, Kelly has been roasted on message boards for abandoning the run too early in past years but found himself receiving a similar level of angst for continuing to run it when Clemson had it bottled up.  That mentality will have to change moving forward though.   It took three quarters for that to happen on Saturday but that can’t happen again for the Irish to make a run.

If Notre Dame is going to beat the likes of USC and Stanford, look for Kelly and Sanford to let Kizer air it out much earlier than they did this past weekend.  Kizer showed them he is capable of carrying this team already and for the Irish to make a run, they just might have to ride the right arm of Kizer to do so.