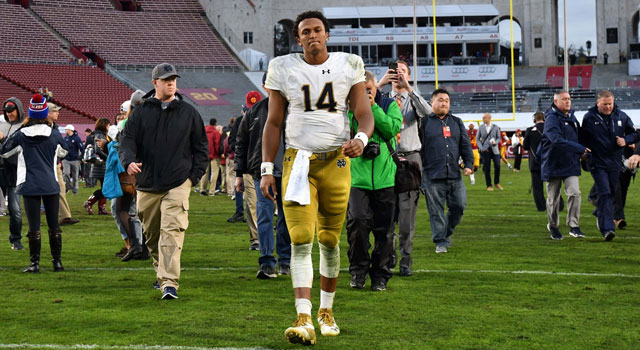 Since Deshone Kizer’s hot start to the 2016 season, speculation has run wild that the junior quarterback would be a sure fire first round NFL pick in ’17.  Even a late season slump that has seen the Irish spiral out out of control with Kizer’s inconsistent performances contributing to the Irish demise in 2016 hasn’t squashed that talk.  With the season in the rear view, it’s decision time for Kizer.

Last year Notre Dame lost Will Fuller, Jaylon Smith, CJ Procise, Keivarae Russell, and Ronnie Stanley before their eligibility was exhausted.   All of them, however, were fairly straight forward decisions.

Stanley was a top 10 pick and it was an accomplishment just getting him back for 2015 to begin with.  Smith suffered a devastating injury in the Fiesta Bowl and wouldn’t have played in 2016 even if he had returned.  Fuller got a first round grade and ended up being selected 21st overall.  Procise’s stock skyrocketed last year and had he returned he was looking at a crowded backfield with Tarean Folston and Josh Adams.  Russell’s decision may have been the only one that really wasn’t simple.

As a quarterback though, Kizer faces a completely different set of criteria.  Listening to Todd McShay – one of ESPN’s Draft experts – during yesterday’s telecast, he was not shy about suggesting Kizer should return.  From a physical standpoint, Kizer has the arm and body to be a NFL QB.  From a mental and maturity standpoint though, Kizer still makes a lot of mental errors and hasn’t shown an ability to take over games like an elite NFL quarterback has to do.

Kizer’s stats this year were OK, but take a look at these two stat lines.

Fairly similar statistics right?  Players A had fewer interceptions and a better rating but also had fewer attempts so with similar attempts the INTs and yards would have been very similar.

Players A was Kizer in 2016 and Player B was Tommy Rees in 2013.  Neither quarterback had a stellar set of receivers in their respective years.  Both had a young group with very bright futures but for the most part they were throwing to inexperienced receivers.  So in very similar situations, Dehone Kizer’s statistics were AT BEST marginally better than Tommy Rees’s.

Quarterback Needy Teams Atop the NFL Draft Board

All that said, none of that will stop a quarterback needy NFL franchise from reaching for a specimen like Kizer in the hopes they can put him in a situation to succeed.  If the NFL season ended today the top of the NFL Draft would look like this:

If the Jags decide to end the Blake Bortles experiment, all five of those teams could be looking for a quarterback which would make Kizer a very liekly top 5 pick even if experts feel Kizer needs more experience and seasoning to be ready for the NFL.

Of those five teams, stepping into the Jacksonville or New York offense as a rookie wouldn’t be too bad for a rookie.  Jacksonville has Allen Robinson and Allen Hurns at WR and Julius Thomas at tight end.  New York has Eric Decker and Brandon Marshall.  A rookie can do a lot worse than that – just ask my Eagles’s own rookie QB Carson Wentz.

Kizer will have to weigh the benefits of returning for a senior season and setting himself up for potentially a better career by coming in more prepared, versus the very real reality that even if he isn’t as ready as he needs to be he can still be a top 5 pick this year.

Now I am going to really complicate matters.  Kizer will also have to weigh the presence of Brandon Wimbush on the Notre Dame roster in his decision making progress.

Should Brian Kelly return to coach Notre Dame – and that’s not a given – we all know he loves a good quarterback derby.   After a year redshirting, Wimbush will be chomping at the bit to compete for the starting role.

Since he arrived on campus, many reports have suggest that Wimbush could be the best quarterback on the Notre Dame roster but also the most raw. Wimbush will be a junior in 2017 and honestly, Kizer has not done anything to this point to suggest the starting position in 2017 should be handed to him without a fight.

Throw in the uncertain future of Brian Kelly, and Kizer really has a lot to consider when making his decision.  In many ways its extremely enviable and extremely unenviable.  This will be the most important decision he will likely make in his life.   The result could be the difference in a great guaranteed rookie contract versus a much more long term and lucrative professional career.

The good news for Notre Dame here, is that unlike years past, Notre Dame’s quarterback depth is such that regardless of Kizer’s decision, Notre Dame should be just fine at the position in 2017.  If Kizer returns and locks up the starting position, the Irish have a first round pick leading them.  If Kizer leaves, Wimbush steps in with Ian Book and incoming freshman Avery Davis backing him up.  That is of course assuming Malik Zaire exercises his 5th year graduate transfer option.  Should Kizer leave, Zaire could still return.

Add it all up and Kizer has a lot to consider and a decision could linger – especially if speculation around the future of Brian Kelly continues to linger.