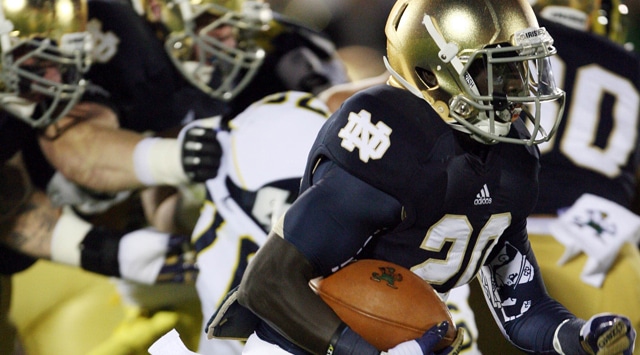 Despite improving to 4-0 on the season and ending a 3-game losing streak at the hands of rival Michigan, there were plenty of takeaways from Saturday night’s performance that were a little less than encouraging.  With a bye week upcoming though, Brian Kelly and Notre Dame will have some time to iron out the kinks before making the quick trip to Chicago for this year’s Shamrock Series game against Miami.

Lack of carries for Cierre Wood

I’ve mentioned it several times since the game ended on Saturday, but Cierre Wood simply needs to get the ball more. Wood has shown in the limited carries he’s received since coming back from his suspension that he is the best runner Notre Dame has in the backfield this year and maybe in quite a few years.  None of the other backs display his combination of speed, acceleration, vision, and elusiveness.

Wood has averaged 5.6 yards/carry each of the past two weeks but has received 12 fewer carries than Theo Riddick.    Despite 12 fewer carries, however, Wood has run for 15 more yards than his classmate and fellow running back.  Notre Dame’s running game has taken a few steps backwards the last few weeks and needs to be corrected in a hurry before the Irish face defenses like Stanford and Oklahoma.

This one should go without saying, but the performance of the offense was by far the most disappointing aspect of Saturday night’s win over Michigan.  Notre Dame just couldn’t sustain offense at any point and Brian Kelly ended up pulling starting quarterback Everett Golson again this week.  Now, hopefully this is just a case of a rookie quarterback experiencing growing pains, and thankfully Kelly has a security blanket like Rees to go to, but Kelly and offensive coordinator Chuck Martin need to sit down over the bye week and really evaluate what they have on offense.

After scoring 50 points in the season opener against Navy, the Irish offense has managed to put up a total of just 53 points combined the last three games.  While the Irish defense is playing lights out football right now, they can’t expect the kind of performance they received from the defense against Michigan to happen every weekend.  Sooner or later the offense is going to need to win a game by itself.

After four games this season, one of the biggest surprises to me has been the lack of designed runs for Everett Golson.  In a game where the defense was crashing down in the middle of the field to stuff the run and harassing Golson into bad decisions, there was not a single designed run called for the first year starter.

Golson has the legs to make plays on the ground, yet a third of the way through the season Kelly and Martin have not tapped into that portion of the playbook at all.   Maybe the Irish staff will use the bye week to get Golson more comfortable with some designed runs so that they can take some pressure off of him in the passing department.  If they don’t, they will seemingly be ignoring an untapped aspect of Golson’s game that could help slow things down for him.

The disappearance of Tyler Efiert again this week

For the second week in a row Tyler Eifert was largely invisible.  The All American tight end did end up hauling in the most crucial pass of the game when he and Rees connected for a 38 yard gain on 3rd and 4 and the Notre Dame 31 with over two and a half minutes remaining, but that was his first catch of the game.

Kelly and Martin have to find a way to get #80 more involved in the offense.  He is simply too talented to be limited to one catch for 38 yards over a two week stretch no matter how tough of a defense they are facing.  Even if they call some tight end screens for him, it would get him into the flow of the game and establish him as the receiving threat he is.  If getting Golson more comfortable at quarterback is Kelly’s top priority during the bye, getting Eifert more involved in the offense is a very, very close #2.

The opportunity for a statement lost

As the UHND crew walked out of Notre Dame Stadium on Saturday we had a weird feeling.  Yeah, Notre Dame has just beaten Michigan for the first time since 2008 and improved to 4-0 for the first time in a decade, but there was just something missing with the victory.  Notre Dame had a legit chance to make a serious statement on Saturday night.  Any time your defense forces six turnovers, you need to score more than 13 points.

While the win was obviously sweet after three straight years of absolutely heart-breaking losses at the hands of Michigan, it would have been that much sweeter if the offense had been able to string together just a few drives and make Michigan pay for the repeated turnovers.  Notre Dame will most likely not be as fortunate to be on the receiving end of that many turnovers from Michigan for quite some time so it would have been much mor encouraging had the Irish made a bit of statement.

Is that getting greedy?  Perhaps, but at the same time the fact that a bunch of Notre Dame fans walked out of Notre Dame Stadium Saturday night after a win over a ranked Michigan team feeling a bit unfulfilled is a great sign that Brian Kelly may indeed have this thing headed in the right direction.