Duranko’s Digest: What Did We See in Arlington? 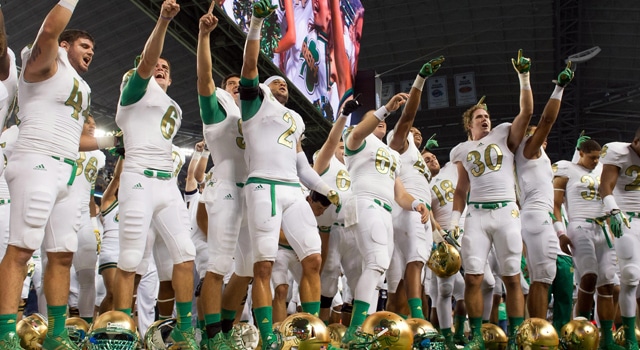 In an unconventional game with unconventional twists and turns, the Irish eked out a nerve-wracking 34-30 victory over Arizona State’s Sun Devils, in Notre Dame’s third consecutive outing against a ranked opponent. The Irish moved to a nervous 4-2 record, and looked longingly toward a much needed Saturday without a game.

Leading up to the Shamrock Series game in Jerry Jones Stadium, there were five pressing questions hovering over the Irish:

(1) Could they avoid getting jumped at the game’s start as they had against Michigan, Purdue and Oklahoma?

(2) Could the Irish avoid destructive turnovers?

(3) How would Sheldon Day perform in his return?

There was a sixth question that was NOT asked

(6) Does ASU have any idea that you can NOT throw the ball near Mathias Farley and Danny Fox in the fourth quarter!!!!!!?

(1) Falling behind at the start?

The opening Irish drive lasted 8 minutes and 8 leisurely seconds ending in the ONLY Brindza miss. No Irish points, but no devilish points either. While ASu did hit its second field goal to go ahead 6-0 at the 6 minutes to go mark of the second stanza, it was not the crushing deficit of the earlier games.

Well, yeah for 45 minutes and 14 seconds, until the Irish, in the fourth quarter, with the ball and a 24-13 lead watched Rees throw a pick 6 to close the gap to 24-20. That one play moved the Irish from the brink of clinching the game to the brink of, well, you know….

(3) Sheldon did not play, so he should be ready by USC. Shembo, however, played like a Prince.

(4) Kelly did rush for 51 yards gained, but nothing huge, as he had against USC. The sacks lowered his official total to 5 yards, the irish defense grades VERY high here.

(5) Death by tempo? No, the Irish countered it and shifted Graham and Kelly away from it.

After the 6-0 deficit the Irish moved inexorably to a 24-13 lead before Rees’ morale-gutting pick 6 to Osahon Irabor. But the Irish drove to a comforting field goal for a 27-20 lead, before, as EVERYONE EXPECTED, ballhawks(?) Farley and Fox wrapped it up.

Now riddle me this: Is it permissible to say ND played a GREAT defensive game when it gave up 30 points?

If not, don’t read the next sentence if you are easily enraged. But the Irish frustrated the ASU offense for 3 quarters, and held the best offense we have played and will until thanksgiving weekend to 13 points in the first 52 minutes of the game.

NEWCOMER OF THE MATCH:

Jaylon Smith – got punked a few times by a slick ASU offense, but cut loose for the first times this season, forcing a fumble, disrupting the edge and getting two big TFL’s. It’s not yet 60 days since his first official practice. They keep saying he does not make the same mistake twice.

He is going to be all that we expected and more, and could be a real playmaker by the Stanford game.

Danny Fox- a nice moment for your first pick 6. Whew!!

IT WAS NOT MY FIRST TIME AWARD

Despite what Harry Dunne and Lloyd Christmas would have you believe C.J. Prosise had had receptions before Saturday.

(1) Get Redfield, Shumate and Hardy ready for bigger roles at safety. Farley and Collinsworh will play a lot, but a dose of athleticism will not hurt. We will need more athleticism at safety against Stanford and the bowl opponent.

(2) Coach coverages better. It is unfair to Austin Collinsworth to have him isolated on ASU’s best receiver-Strong.

(3) Fine tune Jarron Jones and Isaac Rochell so they can reduce the “volume” of plays of Tuitt and Day. Plus they (gulp) may be starters next year.

(4) Work on the timing of Rees with the (four) running backs coming out of the backfield on pass patterns. With Daniels too.

(5) Develop a core of patterns and places where Rees can throw safely and successfully between the hashes.

(6) It may have been fatigue, or blitz adjustments, but our veteran OL had too many false starts. And Nick Martin needs to dial back on fast twitch muscle fiber.

RATING NOTRE DAME AND ITS OPPONENTS

This week, we’ll include the Irish to make it 13., Please note, this ATTEMPT is at analysis of football teams, not rankings or final records., kind of like a handball ladder, where, while conceding that matchups matter, each team would be expected to lose to the team (and all teams) above it (assuming an infinite number of games on neutral fields) and defeat the team (and all teams) below it.

(1) Stanford – along with Oregon and Florida State, one of the top three non-SEC teams in the BCS. Never spectacular on either side of the ball, they grind slow but grind exceeding small. This Beast, Stanford, plays the Beauty, Oregon, in Palo Alto, November 7th. Four guys generate a pass rush, and they don’t need an 8th in the box to stop the run.

(2) Michigan – survived the Post-Notre Dame letdown and are now both unbeaten and rested as they head into the Big Ten Schedule after securing the Little Brown Jug. They might have the best set of coordinators in college football, Borges and Mattison. That means that this team will be coached up this Fall to be ready when the Buckeyes come a-callin’ on November 30th.

For NOW, we rate them ahead of Oklahoma for two reasons (rationalizations?)

(b) Michigan BEAT Notre Dame. On 9/28 Notre Dame beat itself and Oklahoma, competently and gleefully, harvested the win.

(3) Oklahoma – Gutsy flip of the script from the Landry Jones era. Now, they run first, use the mobile quarterback(s), then tilt toward short passes over long ones. Responding to coach Mike Stoops in his second year as Defensive Coordinator, they are quick on defense, but one shudders at the thought of them playing Alabama.

(4) Notre Dame – great skill players on offense with a tough offensive line. Offensive productivity is subject to the limiting constraint of its quarterback, Tommy Rees. Sound rush defense, but front seven did not generate sacks until the Shamrock game in Arlington. Vulnerable to yards after short passes due to limited athleticism at ILB and S.

(5) Arizona State – in a conference filled with highly productive offenses, the Sun Devils, with Taylor Kelly wielding the pitchfork, take a back seat to no one. The defense could not shut down the Mishawaka Cavemen, so their games will be frenetic. The Pac XII South may be the most amusing divisional race in the BCS.

(6) Michigan State – like a rock WYSIWYG (What you see is what you get). Crossbreed Sparty’s defense with ASU’s offense and you’d have something to talk about.

(7) USC – four years from now, some rocket scientist from the LA Times will write a story detailing the NFL draft and careers of the players on the 2013 Trojan team, and Goat Boy Kiffin will be burned in effigy-AGAIN. Take their two defensive tackles, Williams and Uko, and then the two receivers, Agohlor and Lee, and trade the rest of your draft for them. And there’s much, much more. But they’ve come back from Ted Tollner and Paul Hackett before.  So enjoy this moment: they are as tragic and repulsive as the Kardashians, but with more talent. But whoever Haden hires, the new coach is going to have a lot of fun!

(8) Pitt – an interesting team. Few teams can get comfortable winning shootouts (58-55 over Duke in Durham) and white-knuckle defensive battles (14-3 over Virginia, with 387 yards Total Offense for BOTH TEAMS combined). Surprisingly, after Walt Harris, Dave Wannstedt, Mike Haywood for a minute, then Todd Graham, it is Paul Chryst who may be the right fit for the currently 3-1 Panthers. Will the Panthers be able to leverage ACC membership into successful recruiting in Florida, Georgia and the Carolinas?

(9) BYU – middle of the pack in the Beehive State. They are well-coached and successful in beating weak teams (yeah, Mack Brown, raise your hand) and lose to good ones.

(10/10A) Air Force and Navy-while last week’s game went to Navy, these teams are more alike than any two of our other opponents. Air Force’s Mountain West schedule is a little tougher than Navy’s odd collection. Both run, and very well, option-first offenses, are disciplined (Duh! it’s the military) and never quit, but both are small and easy to muscle in both trenches.

(12) Purdue – If the Purdue admin is patient with Hazell, he can help them climb upward. The Len Dawson, Bob Griese, Mike Phipps, Gary Danielson, Drew Brees days are in the archives, but the Boilers can compete in the Indiana, Minnesota, Illinois, Iowa, Rutgers, Maryland tier of the Big Ten.

(13) Temple – still winless, despite being outscored by an aggreate of only 12 points in the three losses following their cameo in South Bend. Games against Army, Connecticut and Memphis appear their best chances for victory.

WHAT WILL WE SEE AGAINST SOUTHERN CAL?

(1) Enjoy this lads: more (rational) people will walk into the stadium comfortable that the Irish will beat Southern Cal in South Bend than will ever happen in South Bend in the foreseeable future. It’s 2013. The greatest players seldom get to their fourth year, so this Haden hire will recruit California and national studs who will be 18 months from the combine when they next visit Notre Dame Stadium.

(2) Great raw talent in the young secondary, but too many frosh. Just watch your back by 2015.

(3) Ed Orgeron, the Ragin’ Cajun on the sideline. If you thought he was over the top in “Blind Side” he wasn’t. He was just being himself. But he will not be the next head coach.

(4) If there is one area where Trojan productivity and performance do not match talent, it is the offensive line. A shame, really.

They say life’s biggest tragedy is unrealized potential, and while we’ve all enjoyed nightmares against the Cardinal and Gold, it’s sad these kids were never coached up.

4-2 heading into the off week.