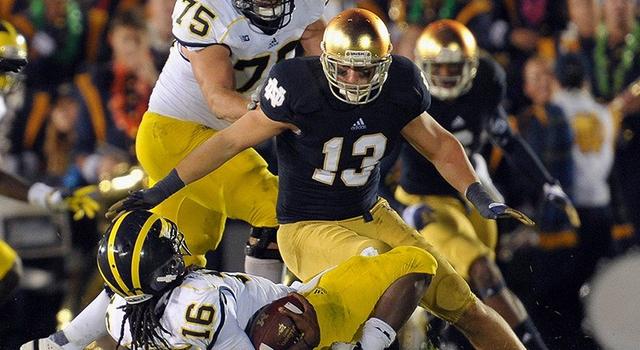 The Irish moved into the week off with a 4-0 record after dispatching Michigan on a memorable Saturday night in South Bend. In the last two weeks Notre Dame has beaten a winning New Year’s Day Bowl team (MSU won over Georgia in the Outback Bowl) and a winning BCS Bowl team (Michigan won over Virginia Tech in the Sugar Bowl).

Early on, adam’s apples gulped, on the field, in the stands, and at home.  Ev Golson, saving his “first game jitters” for his fourth game, both made mistakes and looked nervous doing it.

With less than a minute left in the first stanza, the Irish had run four offensive plays, the most offensive of which was Golson’s interception on the game’s first Irish play.  Yet, the score was 0-0. The defense, especially the front seven, would not allow Michigan to score.  The first goal line stand was a particularly elegant exercise in controlled violence.  The defense would turn Michigan over 6 times, and front four pressure compelled most of the interceptions.  THE DEFENSE ABIDES; just as “The Dude abides.”

In another stellar effort, that unit dominated Michigan, aggressive enough to stuff the run, cautious and disciplined enough to prevent Denard Robinson from breaking anything longer than a 20 yard run. Just as last year, Diaco chose to force Borges to beat us with Robinson’s arm.  This time, with a stronger pass rush, the young Irish secondary held up, even in the fourth quarter.

On offense, the Irish only ran 50 plays.  And Birnham Wood has come to Dunsinane.  As with Purdue, Tommy Rees came in.  You know, Tommy Rees, the calming, steady influence on the Irish offense, who lets everyone exhale and leads us to victory.  Who knew??

Rees led the Irish to the game’s first two scores.  Yes, the Irish have never trailed this season.  Then, late in the fourth quarter, with the Irish ahead, and the clock slowly drooping like Dali’s famous clock, Rees provided a gem.  Somewhere, Tom Clements, Robin Weber, and Ara Raoul himself smiled. Rees and Eifert had a last minute hook-up that paid homage to a New Year’s Eve in rickety old Tulane Stadium almost forty years ago.  The sticks moved.  The game ended. Laissez le 4-0 bon temps roullez.  Au Revoir, bleu!  Au revoir, Re’Nard!

Newcomers of the Match

Matthias Farley: His first appearance here was after the Navy game, and he did not disappoint in his first real start.
Daniels: Exciting, his performance was.  More exciting, his visible, but yet untapped potential, is.  Hey Phillip, your kid can play!
Russell: aggressive, has ball skills, fast. Got a confidence building interception. Getting better weekly.

The Irish charge into next week full of confidence and validation, eager to move up a couple of notches in skill and competence before the event in Soldier Field against Miami.  4-0 team.  Unbeaten in September for the first time since 2002.  Has never trailed this season.  4-0. Act like you’ve been here before.

How good are the Irish?

First the team plays with some intelligence and discipline, not beating itself.  A year ago, after four games the Irish had turned the ball over 15 times, 7 interceptions and 8 lost fumbles.  This year the total is 4, 3 ints, 1 lost fumble.   That’s a 73% reduction in turnovers, a remarkable result. Cue Elias, this might be a record.

The second major change is defense. Last year after four games we had yielded 83 points and now it is 36.  9 a game. We are FOURTH in scoring defense, 16TH in total defense, 28TH in rushing defense, 3RD in turnovers caused. 15th in pass efficiency defense. And remember, the four teams we have played usually put up nice offensive numbers.

The Irish offense has a lot of different ways to attack.  There is the base formation, there is the two or three tight end array (a little like Stanford), and there is the two running back package which was absent yesterday.  While this is all still in installation, it gives the Irish multiple ways to attack and react. Power, guile, or a little of each.  Sun Tzu would approve.  When Wood, Atkinson and Riddick are on the field at the same time there are a lot of ways to go and some niggling matchup problems for the defense. The QB situation suffered a downtick yesterday.  And, right now, the offense simply can not carry the team and outscore opponents in a shootout.  Not today.  But, there is no game today.

The offense has survived encounters with Dantonio and Mattison. Those two, along with Mike Stoops and Spaz, are the best defensive minds we will face.  Behoove me no Kiffin/Orgeron, please!

Front Seven: whether they get enough votes to make it or not, Tuitt and Te’o are playing at a first team All-America level. There are tough tests ahead, but the guys they play with are pretty good and there’s enough depth to rest everyone. The most remarkable credential of the front 7 is that they have carried the secondary and yielded a defense allowing only 9 points per game. “Coaching players up,” is often only lip service.  But Shembo, Spond, Fox and Calabrese are vastly different from the players they were in 2010.

TES: good enough one at a time, good enough in the two TE sets. Eifert causes match up and placement problems even in a BCS bowl game.

RBS: Wood, Riddick and Atkinson are all good enough to start. Consider this: Riddick is the slowest.  All three run, catch and block, a skill Atkinson is learning. Their use in multiple RB sets makes them even more valuable.  Could move up before Halloween.

OL: four solid starters and one guy who is well, you know…Let’s see how they play against Stanford before considering a higher grade. But they protected the quarterbacks in the two games against the Michigan teams.

WRs: Michael Floyd is not going to walk through that door but there are vets like Jones, Toma and Goodman, and explosiveness with Daniels, Brown and Neal.  Again, young players and frosh often play better in the second half of their first season, and that arrives soon. Today, they remain at bowl level.

QB: let’s examine this two ways. Golson the narrative, the film.  This version, barring a successful challenge from Kiel this spring, is less than 10% complete.  He’s started four games, and could play 52 over his career if he can hold the job. He’s a work in progress, not a project. Decent arm strength creative, nimble enough, exciting with huge potential.

But here we rate performance and not potential, so we move to:

Golson, the snapshot-young player who struggles with some play calling and timing mechanics.  Good legs, live arm, beyond his time in grade ability to be flushed, scramble, reset and complete the pass.  Respects the ball and has not turned it over inordinately, except against Michigan.  Doesn’t grasp enough of the O to allow full audible package, requiring Kelly to limit options.  Appropriately graded for now, let’s observe his play in October. And let’s see if Saturday was a mulligan.

Secondary: Perspective: Here’s one story lead you won’t see this season.  “Led by a second half blend of a nickel package of Slaughter, Collinsworth, Wood, and the precocious frosh Darby and Shepard, Notre Dame shut down_____ passing attack and cruised to victory.”

Yikes.  A year ago did you think you’d be talking about Zeke Motta anchoring and leading our secondary? Yikes!  But you throw Shumate, Russell, Farley and Jackson out there with Motta, there’s some raw material. Say what you will, but after four games, they are a unit in a defense which holds foes to 9ppg.  This is not Olympic gymnastics, it’s not how good you look, we award points only for points.  Coming up round the bend are Morris, Nunes, Landry Jones, Rettig, Tanner Price, Tino Sunseri and Barkley. The toughest tests are ahead. There’s enough degree of difficulty there to make a grade increase possible.  By contagion or osmosis, the front seven is making the secondary better.

Stay Home: nothing to see here.  The lone previous occupant, the secondary, has moved uptown! We don’t think they are coming back!

Now, there is one thing either incomplete or disingenuous with our little rating system.  Team game.  And “How good is Notre Dame” can only be answered on a team basis. More about this in future digests.

This Irish team is so different from ’10 and ’11 that its hard to get a fix on the gestalt until they play the meat of the schedule. But after that evening in Norman we’ll know a lot more.

This team now is at least a bowl team, and smells like a New Year’s Day Bowl team.  But let’s talk in another month.

Ranking the Irish and the opponents.

SC: right now the whole is less than the sum of the four and five star parts. Uh, Mr. Kiffin are you up to this task? One of football’s most surprising developments this Fall is the Pac 12 South and the revival that Mora, Rodriguez and Graham have brought to UCLA, Arizona and ASU.

RELATED
Is Notre Dame Football About to Lose a Commitment to Oklahoma?

Stanford: the first team that can match up to the Irish in the trenches on both sides of the ball. Will they be unbeaten when they come to South Bend???

Oklahoma: there was nothing fluky about Kansas State’s win in Norman. They better change some things before they play Texas and Oklahoma State.

Notre Dame: if we beat Stanford, we pass Stanford.  IF.

Michigan: 2-2 notwithstanding, have more offensive weapons than Michigan State.

Miami: at a tipping point.  Florida (addition by subtraction at OC) and FSU may have righted their ships and its never good to be the third program in the Sunshine State.

Purdue: will be fun to watch in the Big We Have 12 Teams but only count TEN because we’re straddling tradition and modernity, and poorly at that.

BC: Spaz still channeling his inner Ruben Blades.  Rettig is no gimme. BC has retired the lifetime trophy as the team Notre Dame’s knucklehead fans (not all of you, of course) always underestimate and then rue the day.

Wake: just hanging on.  Grobe has saved the program from football Dukism.

Pitt: rookie head coach in a funny spot.  It’s a Steelers town, Urban wants to poach Western PA and they soon move to the ACC.  What do YOU think, Corey Clements?

Navy: now reaches the more manageable portion of the schedule, so Niumatalolo’s offense should start producing.

What will we see in Soldier Field?

(1) Miami has better passing weapons than our first four opponents. Remember it was Morris who quarterbacked the Canes against us in El Paso.  Can we hold up against what will be a series of better passing attacks in three of the next four games?

(2) The weekend off is usually the time after which freshmen, from all schools, usually emerge if they will be first year factors.  Which of our true frosh will step up?

(4) Golden turned down other offers to wait for Miami. His tenure at Temple, making Chicken salad out of chicken feathers, is not unlike what Harbaugh did at San Diego.  He doesn’t want to fail, and is looking for a signature win.  Will he have to wait til the Noles?

(4) How will the Irish adjust to Cane quickness, a step up from our first four foes?

(5) Will Golson show significant improvement in grasp and control as he begins the 8 game home stretch?

Adapted from Aliotta, Haynes and Jeremiah:

And there ain’t no road just like it
Anywhere I’ve found
Runnin’ south on Lake Shore Drive
Headin’ into town
Just slipping by on LSD
Saturday night trouble bound.

After two emotional Saturdays and the Spartans and the Wolverines, a Saturday off is just what is needed.  Enjoy!