Duranko’s Digest: What did we see against Navy? 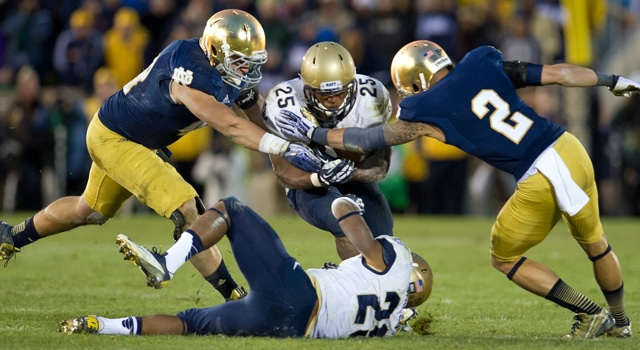 Notre Dame survived a defensive performance dreadful in design and, at best, mediocre in execution using a dramatic late stop to outpoint Navy 38-34.

The previous week against the Air Force Academy, it took the Irish defense 20 minutes to adjust to the the Falcon offense before seizing control. But on Saturday the Irish never deciphered the Naval Code and yielded a nauseating 331 yards in 70 carries.

The burgeoning Irish offense was never stopped by Navy, never punted and had only 2 drives aborted without scores. Both ended on interceptions, the first on a pratfall by the usually nimble TJ Jones and the second on “one of those throws” by Rees.

Since the first quarter ended in the Shamrock Series game, the Irish have, but for the two quarters after Rees went down to Lamar Dawson and USC, put points on the board in every quarter. And , indeed, they have scored a touchdown in each of those 13 scoring quarters. The Irish receiving corps has been jelling all through October, and Koyack has finally arrived as a second receiving option at tight end. And with Folston’s emergence, the running back rotation among Atkinson, Folston and McDaniel is now established with Carlisle chomping at the bit on the outside, looking in. Rest assured, it will remain a running back ROTATION, and at least three will play.

The next three tests will be more physical than the academies were, and we will be able to stress test the reconfigured offensive line against Pitt, BYU and Stanford.

Lost in the despair over the defense, it was not insignificant that Rees rolled out twice, even though that tactic was not successful against the Air Force. Martin and Kelly want this rollout capability in the repertoire, and will work on it through November, including during the off week.

The defense, waiting to exhale for the last two weeks can now withdraw from guerrilla and asymmetrical warfare, and return to conventional warfare for the next three outings.We’re built for that.

The Irish, nervously winning their fourth in a row, moved to a 7-2 record, heading into the final three game set of the regular season.

The running game was featured more prominently. Of the 56 Irish offensive plays, 36 were rushing plays. Early tease: don’t be surprised by how often we run the ball against Stanford. In 2012 we ran the ball 44 times against the Cardinal, with only 28 passes.

A WORD ABOUT DEPTH

In the last two outings, albeit against the academies, we are seeing that depth has now arrived in the Notre Dame program.

Injuries to Watt, Lombard, Williams, Shumate, Day, Nix, Grace have scarcely been felt. Yes, this is not extraordinary, it’s what a first rate program should exhibit. Notwithstanding, it has not been present in these precincts in recent years.

Right now, we are without Grace, Spond, Councell, and Williams. Well, real Notre Dame men don’t whine, and we will use our depth and coaching sagacity to field a respectable, if not breathtaking, linebacking corps. That would not have been true just a few short years ago.

Another aspect of the program’s development is that the subs, deep into the depth chart, are prepared to play and they look physical enoough. We’re not having any Pete Schivarelli’s waddle out there. Guys like Moore, Hardy, Utopu, Okwara, Hanratty,

Schmidt and others have looked and played the part. Our surmise here is that we are much stronger in players 41-85 than we have been since the early 90’s. Our further surmise is that next Fall, when this crop of 2014 recruits arrive, we will be even stronger at players 41-85.

Playing depth has many benefits. First, it makes the players feel that practice is worthwhile. They will now practice and Longo with even more vigor. Second, it puts meat on the conceptual skeletal frame of “next man in.” Third, it allows the coaching staff to be more judicious in sitting players out until they are fully recovered. Nix is Exhibit A. Fourth, it allows the coaching staff to bring the freshmen along in the right way, not throwing them out there both before they are ready and because there is just no one serviceable above them in the depth chart. This is another sign that the program is “arriving” at the upper level.

AND A WORD ABOUT THE SECONDARY

When history is written about the 2012 Fighting Irish, unbeaten in the regular season, there will be two areas that deserve special focus: the 2012 offensive line and the 2012 secondary. We were one injury away from DISASTER on the offensive line, which, as it was, was less than compelling on the right side. Injuries occur on the offensive line with frequency, and it is remarkable that we were able to whistle past that graveyard in 2012.

In the secondary, outside of the graduation losses, and the injuries to Collinsworth, Wood and Slaughter, what did we have to worry about? Three of our starters (frosh Russell, Farley and Jackson) were converts from running back/widce receiver. Our depth was Jalen Brown, Josh Atkinson, and frosh Nicky Baratti and Elijah Shumate (our surmise here is that both Baratti and Shumate will be big players in years to come.) Even before BonJovi’s kid arrived, we were livin’ on a prayer. Yet, somehow, 12-0.

Well, we’ve come a long way in the secondary, and they no longer have to be protected by zones. Jackson is good, KeiVarae Russell much better at man-to-man coverage, and it is feasible that Cole Luke may be more advanced this year than Russell was in 2012. Devin Butler, young, coltish, is a nice fourth option at cornerback. Collinsworth and Farley have issues, but Shumate, Hardy and Redfield provide depth and their potential is, mostly, untapped. Of all the secondary folks mentioned, only Jackson departs, along with Wood. Baratti returns, and who knows, there may be a recruit or two who might press for time in 2013. Perhaps a cornerback from Texas and a safety from California.

It’s a long way from August 2014, but it would not shock reason if the secondary was the strongest area of the team, and one of America’s best.

WILL WE HAVE OPPONENTS WHO PLAY IN BCS GAMES?

Michigan State and ASU won, while OU and Stanford were idle, resting for big Thursday night games against Baylor and Oregon, respectively.

Each of the four and all of the four still have a shot at a BCS game. ASU is in sound shape in the Pac XII South with their game against UCLA on 11/23 looming large. Michigan State is ahead at the top of the stretch to play Ohio State in Lucas Oil for the BCS automatic bid. And that game would be a letdown spot for Ohio State, coming the week after the tradition-and-emotion-encrusted game at Ann Arbor the week before.

WHAT WILL WE SEE AGAINST PITT?

Pitt is a poignant study in football and demographics. In the early aftermath of the American Industrial revolution, Pitt was sitting in the honeypot of American football talent, fueled by the ethnics who had arrived to work in iron and steel and coal. “All the Right Moves” with Tom Cruise as the aptly named Stefan Djordjevich was on point. In the 30’s, Pitt coach Jock Sutherland (in that hiatus between Rockne and Leahy, to be fair) led Pitt to THREE national championships. But the country would, post War, migrate South and West. Sure there was the Michelosen era and John Majors and Jackie Sherrill used players like Dorsett, Wannstedt, Hugh Green, Marino, Fralic and Spindler to lead the last hurrah. Now Pitt plays in a pro town in the Steelers’ tilted Heinz Stadium. Only 4 of ESPN’s top 300 high school prospects, and that is consistent with the last decade, are from Pennsylvania, which is now a football archive, not a pipeline.

(1) An ACC opponent! We will see more next year!

(2) Tom Savage, a freshman hotshot at Rutgers, who fell out of favor under Schiano, is competent, but not more, at quarterback. And he is not particularly mobile. Diaco and the defenders will probably slay a fatted calf on Monday to bid farewell to option football.

(3) A team that may be a little bit better than its 4-4 record. When Pitt got trampled by FSU in the opening weekend, few knew how good Jameis Winston and FSU really were. A ten point loss at Virginia Tech and an inexplicable 3 point loss to Navy were annoying, not embarassing. We are witnesses to how annoying it can be to play Navy.

(4) The Panthers have some nice skill players. Isaac Bennett averages over 5.5 yards per carry, and receivers Tyler Boyd and Devin Street each have over 30 catches. They are the best receiving corps we will have faced since Nelson Agholor served as a Trojan Army of one.

(5) Our defensive line and linebackers must adjust from two weeks of academy football to the more conventional brand that Chryst employs at Pitt.

(6) A defense which, while not great, will be sound enough to test our reconfigured offensive line and the rotation du jour of our running backs.

(7) A beautiful football venue, Ketchup Stadium is. Remarkable sight lines to the field, and a view of the Ohio River.

A win over Pitt puts the Irish at 8-2, going into a week with no game on Saturday. The Irish improved after the first hiatus, and the might again, going into the final stretch of two regular season games.