Duranko’s Digest: What did we see against Stanford? 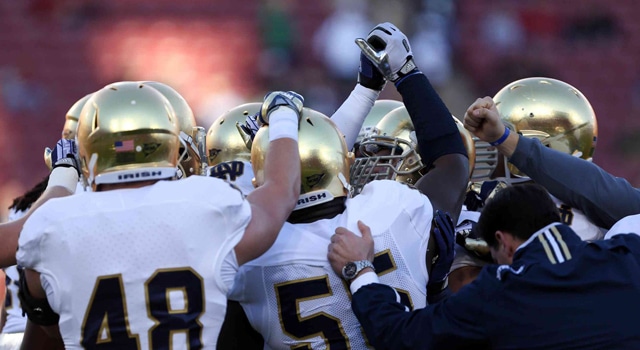 A powerful Stanford team defeated the Irish 27-20, concluding the Irish season at 8-4. The fulcrum of the game was Stanford’s outrushing the Irish 261-65. Out there among the eucalyptus trees in Google’s manger, Stanford is know for producing great software. But there was nothing soft that would wear down the gallant Irish stop troops. The Anvil chorus was Tyler Gaffney running behind= a massive veteran offensive line, the best the Irish had seen since Bama. It was fortified by folks like Josh Garnett disguised as a tight end, more tight ends and fullback types. And the counterpoint to the Anvil Chorus was the whimsical grace notes offered by the runs of Kevin Hogan.

Overmatched in both trenches, the Irish tried to steal the game, but some old sins were repeated, with Stanford scoring their first TD on a coverage bust by a Notre Dame safety. And when the Irish were trying to accomplish a miraculous, Auburnesque comeback, two interceptions were thrown. All four Irish defeats this year had two common elements:

The tilt started promisingly enough with the Irish marching the opening kickoff to the Cardinal Tree Three, Brindza getting the field goal for the only Irish lead at 3-0. Then in a seven minute span Stanford scored two touchdowns, the first after an Alphonse and Gaston pantomime by #41 and #2, the second on a pounding Stanford drive. All seemed lost, but the Irish came off the ropes and managed a field goal just before halftime to close the gap to 14-6 at intermission.

Stanford punched in another, but its final, touchdown early in the third stanza for a 21-6 lead. Again, all seemed lost, but the gritty Irish fought back with two third quarter touchdown passes, sandwiched around a Stanfor field goal. The first was to senior captain T. J. Jones, the second was to Davaris Daniels, and the Irish were within miracle view of the upset, trailing just 24-20 as the fourth quarter began. But the Irish mustered only 17 yards total offense, a sack, and two interceptions in the fourth quarter, for the 27-20 final.

SO ENDETH THE SEASON.

WHAT’S NEXT FOR NOTRE DAME?

Next season begins with the bowl game. Last year at this time, Notre Dame was idle, waiting for Alabama to go through the motions defeating Georgia in the SEC championship. 2012 was about 2012. Fans were pricing tickets for Miami.

Before the season we postulated that the 2013 roster would, throughout the whole depth chart, be deeper and more talented than the 2012 roster. “Next man in” is like New Hampshire’s motto “Live free or die” It’s nice to say but you hope you don’t have to back it up. Deep ladles of young second and third string players were scooped up and used this year. Our next postulate is that, with this 2014 recruiting class (we concede that with the exceptions of Justin Brent and Andrew Trumbetti, the commits have not sighed or submitted academic and enrollment paperwork) the 2014 roster will be yet deeper and more talented than the 2013 roster.. We’ll ignore redshirts and just look at the 2010 class. It is a low bar to replace it with better talent.

Left for other programs(3)

Perfect attendance, but no impact (2)

Never quite got there(4)

(It is melancholy to note that of the 9 players who started, four of them, Nix, Lombard, Smith and Spond were not in uniform yesterday. C’est la vie!)

Please note how many of these players get drafted, this year or next. The incoming class, recruited after 2009-2010’s transition process is stronger deeper, more athletic.

We never know when injury will strike, but these three areas look like fun battles in the Spring,

SAFETY – we must improve dramatically at safety, and there are players to work with. Should wind up with an effective three deep, but something’s got to give.

ILB – Carlo and Danny leave, but the cupboard is not so bare as the chicken littles suggest. Who can the coaches trust to start next to Grace, and who are the preferred backups?

OL – this will be a donnybrook, with Martin and Watt leaving, Lombard recovering, and Nick Martin out for the Spring.  The studs that came in with Elmer: McGlinchey, Montelus, McGovern and Bivin will be jockeying for playing time and possibly entrenching themselves in the starting lineup. Wally Pipp references will abound.

No matter what, we will have a quarterback with at least some mobility from this point until Blake Barnett’s senior year.  Remember this-we’re right next to 8-4, but we’re not a year removed from 12-0.