Duranko’s Digest: What Did We See Against Syracuse? 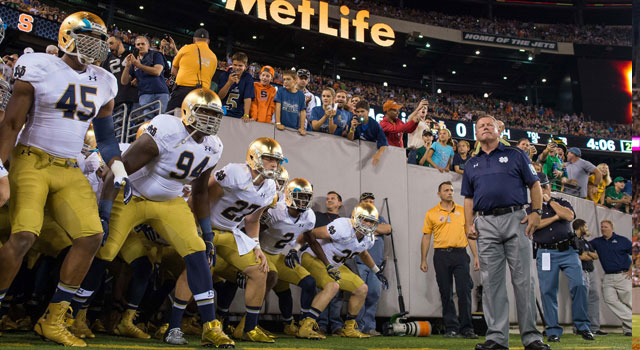 The fumble at the end of the fist half, on the botched attempt to “clock” the ball was arguably the worst play by a Notre Dame quarterback since “All Ball” Davie’s use of Jarious Jackson to get a safety against LSU in 1998, leading to Jackson’s injury, and Eric Chappell’s one unshining moment quarterbacking the Irish to a miserable 10-0 loss to USC. Golson’s pick 6 was astounding, and completely out of character, a frosh mistake made by a senior.

All right, that’s done, behind us. Time to take it out to the trash bin and move on! Don’t look back! Something might be gainin’ on ya! 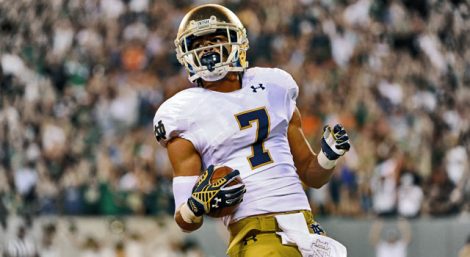 Two seniors, Davaris Daniels and Amir Carlisle, out for the game. One receiver playing in his first game, Torii Hunter Jr. TWo relatively inexperienced sophomores, William Fuller and Corey Robinson, and a converted safety, C.J. Prosise as part of the lead pack. So what?? This Irish receiving corps, which will at least add Carlisle back for Stanford, is growing before our eyes. Elite speed in Fuller and Chris Brown, near-elite speed in C.J.Prosise, they all can catch, they all can run and they all can block. Hunter’s size was shocking. He’s got his poppa’s guns and he does not play in a shy way.

This game showed both sides of the coin of Brian Van Gorder’s defense. Syracuse had entered the game with 250 yards a game rushing, and would have been held to less than 100 but for the fake punt run of 42 yards by Riley Dixon. The Irish did give up some long passing plays of 25, 33 38 and 46. Perfect! that is the exact tradeoff of the Irish defense. Big plays will occur from time to time, but we will stop your primary offensive weapon.

The Notre Dame defense had an approach to the Syracuse offense. Cut off the head of the snake and the snake dies. Syracuse’s offensive brain trust and quarterback Terrell Hunt, he of the erstwhile 7.2 yards per carry average, soon realized that they were not playing Villanova, Central Michigan or Maryland. A run first offense will just not work against this Irish bunch. Simply, that scruffy, mangy Orange dog could not hunt.

Torii Hunter Jr., Austin Collinsworth, something old, something new. Each shares the award for having had a serious injury that cost them a year and then another different injury. We may be very strong at “Rehab.”

THE PERFECT PRELUDE FOR STANFORD

It’s A Goldilocks situation, not too down, not too up, just right. Confident, but concerned. Expect a great week of practice.

WHAT DID WE LEARN ON SATURDAY?

We learned that the Irish are not automatically mistake-free but have to work at it. And we learned that even with a -4 turnover differential, we have enough to pound teams like Syracuse. We merely had confirmed the truism that the Irish are pretty good at shutting down second-tier teams. We have yet to learn how they will do against very good teams and how they will play on the road.

WHAT WILL WE SEE AGAINST STANFORD?

(1) A rough, tough team with the size on their defensive front seven that matched Notre Dame’s prototype under Diaco. But do they have the playmakers like Ben Gardner, Chase Thomas and Shayne Skov? They did, however, hold the robust Washington offense to under 200 yards.

(2) Perhaps an answer to this question:

REGARDING STANFORD QUARTERBACKS, WHICH IS MOST UNLIKE LTHE OTHERS:
(A) John Brodie
(B) Jim Plunkett
(C) John Elway
(D) Andrew Luck
(E) Kevin Hogan

(3) Three stress tests for the Notre Dame Defense:
(A) Stanford will pound the ball for 60 minutes. Will our defensive line depth hold out or will we wear out in the fourth quarter?
(B) Will the new, lighter, linebacking corps hold up against the Stanford rushing game (Remember, Andrus Peat, Kyle Murphy and Josh Garnett are juniors now)
(C) Will the first legitimate passing attack we face this year be too much for our Russelless secondary?

(4) Three stress tests for the Notre Dame offense:
(A) Can Notre Dame’s large, mature OL open up some holes for the run game and still protect Golson from being sacked by the myriad pressures form the Stanford front 7?
(B) CAn ND’s wide receivers get separation against a surprisingly athletic Stanford secondary?
(C) Will Golson stay calm if adversity arises, and keep the Irish offense moving the ball?

(5) A litmus test for the Notre Dame team and “program.”
Our only victory over Stanford was the 2012 nail-biter in OT with the goal line stand. But if want to be deemed to have climbed the next rung on the ladder, we will have to have functional control of this game, with a working margin for most of it. A big loss, a loss, or even a tight win would mean that we’re just about even with 2012, not better. But if you’re not on the edge of your chair, at home or in the stadium, but sitting back a bit from the second quarter on, relaxed, then we have advanced a bit. We shall see.

(6) The calendar will turn a page to October.

October is a special time in South Bend. The heat has departed, and a crispness fills the air. Sweaters are more necessary than decorative. The Indiana trees, maples, oaks, elms and sycamores, have begun to turn, and leaves begin falling. You hear the rustle of fallen leaves as you walk in grassy areas. Summer is surely gone and it’s Football Time at Notre Dame. And young men shall see visions and old men dream dreams. October dreams and the glory of Notre Dame football.

It was October in the East, on a ground originally used for Polo, right above Coogan’s Bluff on the Harlem River in New York. It was the 18th day of October when the Irish went to the Polo Grounds to play Army. Rockne didn’t come alone. He brought sleepy Jim Crowley, Elmer Layden, Don Miller and Harry Stuhldreher to that game in 1924.

The Irish were magnificent, and up there in the pressbox was Grantland Rice. He always understood that the romance with college football was becasue of its poetry not its prose. And CLICK-CLACKING away on an old manual typewriter for the New York Herald Tribune, Granny Rice wrote the most memorable paragraph in the rich history of American sports writing, a poem masquerading as journalism:

“Outlined against the blue gray October sky, the Four Horsemen rode again. In dramatic lore their names are Death, Destruction, Pestilence, and Famine. But those are aliases. Their real names are Stuhldreher, Crowley, Miller and Layden. They formed the crest of the South Bend cyclone before which another fighting Army team was swept over the precipice at the Polo Grounds this afternoon as 55,000 spectators peered down upon the bewildering panorama spread out upon the green plain below.”

Dreaming October dreams was Frank Leahy, and he took his Irish up to play Fritz Crisler and the mighty Wolverines in Ann Arbor in 1943. Leahy’s Irish were led by Angelo Bertelli on that October 9th, and the irish demolished the Wolverines 35-12, sending the Wolverines into hibernation for 35 years.

And a young football player in Akron, a non-Catholic from an Armenian family, dreamed dreams. Ara Raoul Parseghian would not listen to the elders who told him to quit seeing visions of Notre Dame.
The sky was not blue gray on that October day in `1973. An Autumn rain drenched Michiana, and the irish sought to beat USC for the first time since 1966. Heck it was already ’73. On that October 27th, the Irish fans grimly set their jaw and trudged through the pelting rain to the stadium. The first half was tense. But on the first play of the third quarter, Eric Penick got the ball on one of Tom Pagna’s beloved misdirection plays, headed around left end, behind the crushing blocks of two kids from Long Island, Pomarico and Dinardo, for 85 yards and the touchdown that propelled the Irish to a 23-14 win and the eventual National Championship. On that run, it seemed as if Penick was propelled by a tsunami that started on Angela Avenue and carried Penick into the end zone where it crashed in a crescendo of foam, noise and deliverance.

Dan Devine watched from afar and this tiny leprechaun of a man dreamed his October dreams. In 1977, the normally taciturn Devine turned motivator-in-chief, and after the Irish returned from pre-game warmups on this overcast October 22d, they found green jerseys on their chairs in the locker room. Now the rules tell you that a game can not be won before the opening whistle has blown. But that game was over when the Irish doffed the sacred blue and donned the green before charging, stampeding, marauding through the tunnel to destroy USC 49-19 on the way to another National Championship.

The rookie coach at Arkansas, Lou Holtz, watched from afar and dreamed his own October dreams. It was bright and sunny, no clouds, no rain in 1988 when the Irish “entertained” the fearsome, tempestuous Hurricanes of Miami, winners of 16 games in a row. It was the Ides of October, the 15th, and in a game for the ages, Notre Dame vanquished the Hurricanes 31-30 in a thrilling game only decided with Pat Terrell’s heroic breakup of a two point conversion. The Irish then went on to win the National Championship.

It is our time. October. Notre Dame time.

You know the anthem: