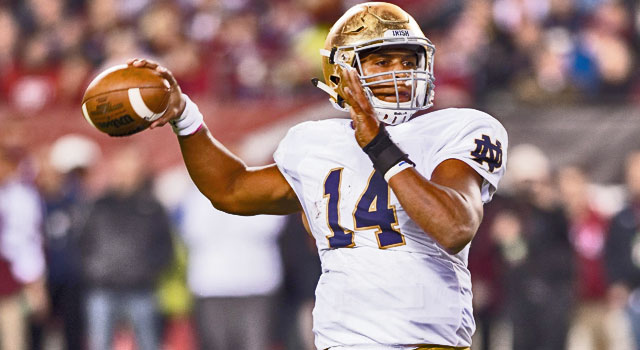 Temple played up to Notre Dame’s level rather than Notre Dame playing down to Temple’s.

Temple played as if:

Rhule made a choice in combat tactics that would have made von Clausewitz proud. He had edicted through his defensive coordinator that C.J. Prosise would not make big plays against the Owl, neither running nor catching the ball in space. That was the fulcrum of the Owl defensive strategy. All such decisions have tradeoffs. Kelly, Sanford Denbrock and Kizer knew that.

We saw the good, the bad and the ugly.

The GOOD was Kizer rushing for 143 net yards including the moment when he channeled his inner Bill Etter and scampered (sic) 79 yards for an Irish TD. That was the price Notre Dame charged Temple for locking down Prosise.

The other GOOD was 299 passing yards. That number understates Kizer’s passing effectiveness as the multiple interference penalties called against the Owl secondary ought be pro forma’d to reflect the true passing yardage.

The BAD was the two interceptions. Notre Dame had the chance to snap Temple’s will twice in the second quarter. The first happened with the Irish ahead 7-3 and driving methodically. With 3rd and 7 on the Owl 14 Kizer made a horrific throw, granting the Owls a reprieve. Instead of 14-3, Temple grabbed the ball and went on its longest drive to lead 10-7.

Later, with the Irish up 14-10 Kizer threw into a tight window to Fuller at the goal line, but the ball was deflected into the grabby hands of Tyler Matakevich. 21-10 would have been more comfortable entering the halftime break.

The UGLY was the game’s last play.

They’ll work on that one.

Team 127 is mentally tough. Down 20-17, Kizer hit Brown on the third down play. Kizer hit Alize Jones on a carefully crafted crossing pattern for 45 yards. Kizer hit the returned native Fuller for the Irish lead 24-20. KeiVarae Russell, who plays best in the fourth quarter made another acrobatic interception. MENTAL TOUGHNESS IS THE WILL TO WIN.

The defense was outstanding. On an evening when the offense left somewhere between 6 and 14 points on the plate in two red zone interception the defense held its ground. Shumate’s targeting call was technically correct, and we live with consequences, but it was unfortunate as it came after the ball was free on the ground. Another 4 point differential.

Notre Dame 24-Temple 20. Irish move to 7-1, handing Temple its first loss. Temple is the best football team the Irish will play between USC and Stanford.

The Opposite of Irrelevance

Four times this year, the Irish have been a “circled” opponent on the calendar: Virginia, Georgia Tech, Clemson and Temple.   Good! It’s the first robin on the spring of Notre Dame’s return to football excellence.   No one will rest until all 12 opponents are “circling” Notre Dame as the most important opponent.

Coming into the game, Temple was scoring 27.6 ppg, allowing 17.6 ppg.   This time they allowed 24 and only got 20. Temple was aggregating 356 yards of total offense and allowing only 296 yards in total offense. This time they accumulated 295 and allowed 467. Notre Dame slammed through all the standards in all four categories. The two red zone interceptions compressed the final margin. It is only points, in REAL, MANLY FOOTBALL, that matter, not statistics.

Phil Steele has a ranking of all teams based on their overall special teams performance. Notre Dame was ranked 29th going into the weekend. Keep in mind that the precocious Newsome, because of his ability to hit the coffin corner, suffers in average because of that.

The following Power Five teams were unbeaten on All Saints Day, Nov. 1

The following Power Five teams had one loss

That’s 15. The number is dwindling, and will continue to do so. November is the season to separate wheat from chaff..

What Will We See Against Pittsburgh?