Duranko’s Digest: What Did We See Against USC? 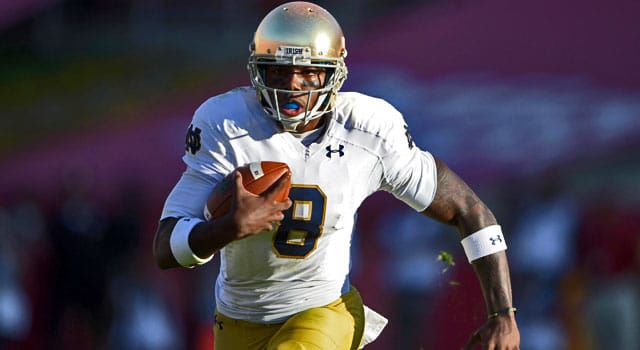 Ugliness, embarrassment, second disaster of the year.  USC, resisting the temptation to run up the score, buried the Irish 49-14, sending the Irish to its first four game losing streak since 2009, and its biggest loss since 2008.

Steve Sarkisian was able to bequeath the very accurate Cody Kessler, able to function calmly without a pass rush to annoy him, with matchups pitting USC’s speedy receivers against less swift Notre Dame defenders.  The most dramatic mismatch was in USC’s second touchdown drive, when Sarkisian dialed up the wheel route he learned by watching Norm Chow use it with Reggie Bush back in the days of Carroll at Heritage Hall.  World class sprinter and full-time cornerback Adoree Jackson lined up in the backfield a couple steps wide of Kessler (just as Chow would do with Bush).  Greer Martini stared at Jackson, his assignment.  Ball snapped.  Jackson wheels out and heads for end zone, Martini trailing, Kessler easily delivers to the open Jackson and it’s 14-0. It was a turkey shoot.

After making USC work for 10 plays to get 33 yards in their first drive before punting, the Notre Dame defense allowed the following in the next five drives:

Meanwhile, Everett  Golson was completing his death spiral. Everett completed 7 of 18 passes for 75 yards with one interception for an 8.4 QBR.

Inserted after Golson was mercifully, not mercilessly, ushered to the bench,  Zaire showed that he has some ability, particularly as a runner.  But he did nothing that will scare Deshone Kizer or Brandon Wimbush into transferring.  While neither Golson nor Zaire was particularly rescued by Notre Dame’s wide receivers,  Zaire reminded us why Golson is rated the more accurate passer.

His first extended action of the year was a lone bright spot. He brings a burst to his runs that may lead to long gainers in the future.  He may become a partner, rather than a mere backup, for Tarean Folston in 2015.

Everett Golson at the Crossroads

“When you come to a fork in the road, take it.”  Yogi Berra.  As the clock waned in Tallahassee on October 18th then Heisman Candidate Golson threw a perfect spiral to Corey Robinson in the ‘Nole that looked like a game winner to bring the Irish to 7-0. Zebras brayed otherwise.

Since then, Golson has come undone. As we have never seen before. Golson, though the sensitive pianist, worked hard during his time away from Notre Dame, and has worked hard since. He wants to succeed.  And Kelly and LaFleur want him to succeed.   Willing hearts and minds SHOULD be able to fix this.  But the time is now.  This road back must begin being traveled  before the bowl game.

OUR TRUE ENEMY HAS REVEALED ITSELF

Now that the 35 year flirtation with Michigan is over, our rival is as ever, in Cardinal and Gold.  USC is playing with a depleted roster, and a long list of injuries.  But Sarkisian has shown us what he promised Haden in the interview process regarding his offensive strategy.  A huge, massive offensive line.  Damien Mama at 6’5, 370,  Viane Tailamavao at 6’3”, 330 are frosh, Zach Banner at 6’9, 350, a soph.  Wait until they hit the weight room.  USC, in the future will pound on your DL in the running game until they:

(a)  Wear out your DL, tiring out your pass rush
(b) Force you to put a safety in the box
(c) Increase the power of play action

After that they will send their sprinters (Smith, Farmer, Jackson) out to search and destroy your slowest defenders, and have an accurate quarterback, Cody Kessler today, Ricky Town tomorrow, complete passes to them.

In future years, perhaps as early as 2016, this will be the most daunting in season matchup for the Irish.

DON’T MAKE BAD OR HASTY DECISIONS IN A DOWN MARKET

It is inescapable that Brian Van Gorder’s defense has allowed 43.4 points per game in the last five. But in 2015, he will lose only Justin Utopu and Austin Collinsworth who started against SC, will have his players in their second year of understanding the system and will benefit from

The current tasks that are most important, in this order, are to begin restoring the confidence of Everett Golson and to practice well, play well and win the Bowl Game.