Duranko’s Digest: What did we see against USC? 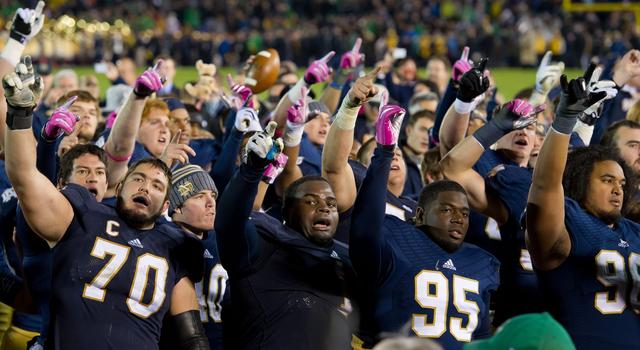 FIGHTING IRISH.  That’s what we saw.  And that is an empirical, technical description, not a mere nickname or wish.

Fresh from a Saturday without a game, the Irish produced the season’s best performance, beating Ed Orgeron’s Trojans.  It was the second win in a row over Troy and Traveler, the first time that has happened since El Lobo, Bob Davie, capped off a three game winning streak against USC by besting Pete Carroll’s first Trojan edition by a score of 27-16 in Notre Dame Stadium in 2001.

All USC-Notre Dame games are different, but some are more different than others.  The Irish took the initial adrenaline rush of Orgeron’s amped up Trojans and were leading 14-10 with 5:29 gone in the third period.  At that point, the Irish, showing the typical Kelly era improvement in the second half of the season, had run 41 plays for 290 yards (over 7 yards PER PLAY) against a credible defense.  Tommy Rees, aided by an improved running attack, was a crisp 14 of 21 for 166 yards and two touchdowns.  The Irish defense, after yielding a touchdown on SC’s first drive, had stiffened and shut down the Trojan offense in the first two drives of the third quarter. The Irish had the ball at the USC 47 and were ready to move in for the kill.

But Clancy Pendergast thought otherwise, and called a clever delayed blitz for Lamar Dawson.  It worked and he took Tommy Rees down, HARD.  Rees was done for the evening and you knew that instead of Everett Golson or Gunner Kiel walking across that sideline  it would be Andrew Hendrix.

The air went out of the joyful balloon of crowd optimism, but on the sideline that band of brothers, stout of heart and full of fight, buckled their chinstraps, and what would ensue would be the most spine-tingling 24 minutes of 0-0 football since an overcast day in Yankee Stadium in 1946………..

In a defensive stand longer, more improbable, more dramatic and more folkloric than the goal line stands against Standord and USC in 2012 the Irish defenders rose up and would not let Troy pass.  It was like the Spartans at Thermopylae, it was as brutal and willful as the Thrilla in Manila, somewhere on the other side of sweet science where men look into each other’s eyes and souls and exerted a  a phrase which, though cheapened by modernity and fan speak, redounds eternally among men of honor:  THE WILL TO WIN.

The spectacle outweighs the stats, but for the number crunchers among you, the Notre Dame defense allowed SC a total of 71 yards in 6 drives following the Lamar Dawson tackle that injured Rees.

For the second game in a row, the Irish avoided the first half deficit, and withstood the adrenaline of an amped Cardinal and Gold horde.  Southern Cal had their lowest point total and lowest yardage of the year.  Rees seemed more settled after the Saturday off, and his timing with the receivers and the running backs seemed enhanced.

Despite obfuscation and dissembly and circumlocution, here is PRECISELY what will happen at quarterback.  If Rees can play, he will and will start.  If he cannot play, the redshirt will be removed from the eager back of Malik Zaire, and he will be prepared to play AND play.  No ifs, no ands, no buts.

The win was a step forward, bringing Kelly to 3-1 after bye weeks at Notre Dame. It was Kelly’s third win against southern Cal.  “Figures Lie and Liars Figure.”  Herein the most vile, though accurate statistic, EVER about Notre Dame football: Kelly moved into a four way tie with Ara Raoul Parseghian, Gerry Faust and Bob Davie for second place in victories against SC in the modern era.  Yechh!

Sheldon Day was competent, but not all the way back on his return. Stephon Tuitt, as he puts distance between himself and the nettlesome sports hernia, recalls days of Future Passed.  In a Graceless, Spondless, effort the linebacking corps acquitted itself admirably.  We do not face a team that can surgically attack our pass coverage issues at linebacker and safety until Stanford stampedes their elephants against us on November 30.

Newcomers of the match:

Devin Butler/Cole Luke – out there running around with Marquise Lee (while he played) and Nelson Agholor.  18 months ago our four top cornerbacks were Bennett Jackson, Lo Wood, Jalen Brown, and Josh Atkinson.  Not any more!

Steve Elmer – not that Lombard is less, but Elmer is more.  He must have a powerful lower body as he drives people back.  He and Stanley are the hints of what Hiestand’s lines will look like for the rest of this decade.

Jaylon Smith – while he got his first interception, it was the drop that was more magnificent than the catch.  We sure haven’t seen that kind of play from a linebacker in these parts before!

I DESERVE MY SCHOLARSHIP AWARD

Joe Schmidt – limited or not, his hit on Jalen Cope-Fitzpatrick on SC’s penultimate offensive play was brilliant.

The next part of the season:

This is very intriguing and unusual for the Irish.  The Irish schedule was front loaded this year, with two live BCS prospects, Michigan and Oklahoma, and two tough teams making noise in their divisions, Arizona State and surprising 5-1 Michigan State along with “patsies” Purdue and  Temple.

But the next four games will not see the Irish playing a team that will finish the season in the top 25.  The two academies are outmanned, and Pitt and the Cougars can be pesky, but they are not the caliber of those four fine teams played the first part of the year.

There is much the Irish can work on:
(1) developing the passing game between the hashes
(2) developing the passing game to the running backs
(3) using Carlisle and Folston more
(4) playing some depth on the OL, and in more than just garbage time
(5) Seeing what Onwualu, Fuller, Prosise really are
(6) getting more comfotable in two and three TE sets for Stanford and the bowl.
(7) getting Rochell and Jones a lot of work
(8) working on the blitzes
(9) working Luke and Butler a lot at CB
(10) the rite of passage for Max Redfield so he’s ready at safety for the end of the year and 2014.

What will wee see in Colorado Springs?
(1) Mountains and aspens, those past their peak
(2) The weakest Air Force Academy team in years.  Dee Dowis is not walking through that door.
(3) A chance to get the kinks out before we play Navy’s slightly better option.
(4) the challenges of altitude, and player stamina.

5-2 lads.  Yesterday was a day when boys became men.
Go Irish! You are our FIGHTING Irish!