Duranko’s Digest: What did we see in West Lafayette? 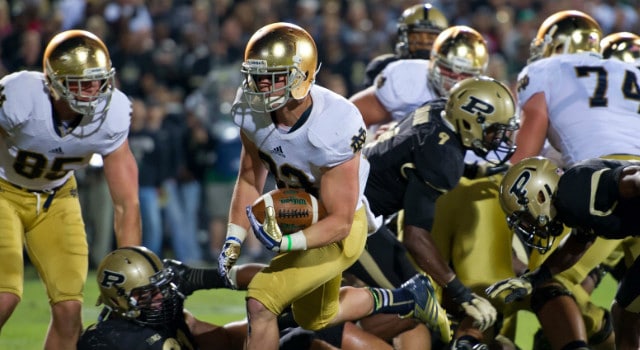 In the final 36 minutes the Irish outgained the Boilers 342-150 and outscored Purdue 31-10. While we cannot gainsay the start of the game, it is conceivable that the Irish may be closer to righting the ship.

The defense. bouncing back from the previous week’s trauma, was facing the least mobile (yet not altogether immobile) quarterback we’ve faced. Purdue did not have a skilled player who could attack the defense, and the defense kept the yardage down, yielding just 294 total yards, 71% of the revolting 411 per game total the first two weeks.

On defense, there were several important developments

(1) Rochell played more than he did against Michigan, but not by much. He is quick and as he gains weight can be a force in the future.

(2) the blitz packages are still a work in progress, but progress is arriving. The success of blitzes is measured in true quarterback hurries, not merely sacks. And Henry was forced to throw the ball away a lot.

(3) Jarrett Grace may have “arrived” Saturday night. He is fierce, aggressive and quicker than the starters.

(4) the man to man coverages are part of the defense. We’re no longer zone only. CB and safety depth is coming, and SOON!

Despite the scar tissue from the two interceptions against last week’s opponent, the offense is surprisingly disciplined. We have fumbled once and lost one fumble. That is two interceptions and one fumble in the first three games. That’s three too many, but be realistic. One per game is championship level. Also, just one sack allowed per game, with a non-elusive quarterback. The penalties have been few. Most have been on the defensive side. Sure, we’ve used a couple of timeouts, but they are not penalties. This offense, now, unlike 2011, no longer beats itself with turnovers, and that is now a HABIT. This offense, whether you see it or not, is not far away.

When the running back rotation gets settled, and there is better timing on the short routes to the running backs, this offense will get explosive. Watch and learn, lads.

So, Mr. Defensive Coordinator, you want to crowd the box, blitz the run and make Tommy rees beat you by throwing?

Oh no, Mr. DC, do anything you want but don’t throw us in THAT Briar Patch!

And the next thing you know, there are long arching passes to Davaris Daniels, Chris Brown, T.J. Jones and the fast-arriving Corey Robinson.  Everything’s connected, and the crowd in the box is creating space for our gazelles. And yeah, Rees can hit them.

Newcomers of the match

Amir Carlisle-good thing Daddy went to Purdue. Stronger than his height and weight. Remember, he’s still knocking the rust off from the long layoff.

Nick Martin-looks as if we are set for center through 2015. Makes few mistakes

Chris Brown-last fall it looked like he was two years away, but he cut that in half. He may not yet know how good he can be..

Austin Collinsworth – has recovered from injury. Nicky Baratti, are you watching this?

Cam McDaniel-wipe it off and put me back in!

We have four categories:

And we are rating these categories based on 2013 performance, NOT credentials, resume and potential

Wide Receiver – DaVaris Daniels and TJ Jones performed well on the big stage against Bama,and each has ELEVATED HIS GAME in 2013. Chris Brown is now a very good third option, and may be ahead of where Daniels was last September. The kids, Robinson, Prosise, Onwualu and Fuller may be pushing loyal soldier and protector of Skylar Diggins, Daniel Smith down to third string.

Defensive Line – sorry, we rate based on 2013 performance, not mock drafts or past achievement. Granted, it is early, and we would expect a grade bump, for this DL will be better against teams that run power and have an immobile quarterback (Pitt, USC) than against mobile quarterbacks. Further, because of Vanderdoes non-arrival, Hounshell’s Spring injury and Springmann’s Fall injury, the depth is not what it was a year ago. Our second string DL in September of 2012 was Day, Springmann and Schwenke. Rochell and Jarron Jones must step up. Six playable defensive line men is the BARE MINIMUM for BCS teams. Bama played 12 in yesterday’s game. We are stout against the power running game. Whither the push and pass rush from the DL? And containing the running quarterbacks? QBS have averaged over 50 yards per game in the first three games. That just will not do.

Offensive Line – This unit is much better than in 2012 and Martin and Stanley are getting better weekly. They are also showing the Heistand effect. The reduced running yardage is a product of play selection and checkoffs to passes. They run block with power up the middle. When they have Niklas next to them, they open huge holes. Though we haven’t played a tough defensive front yet, we will face three in the next four games-MSU, Oklahoma and USC. USC’s defense is demonstrating the benefits of Kiffinless coaching. The OL protects the elusiveness-challenged passer and don’t get penalties. One sack per game. We now have a little depth, but by next August we will have true depth.

RELATED
The Importance Of Kevin Austin for Notre Dame Football

Linebackers – much experience in Shembo, Fox and Calabrese and the Golden Child in Jaylon Smith. Calabrese and Fox are not NFL prospects, but they make few mistakes. Shembo has to contain before he cuts loose. Grace and Councell are able reserves, and Ishaq Williams may finally be on the verge of breaking through. Could get a grade bump by October. Grace and Williams hold the key

Tight Ends-Troy Niklas may be Notre Dame’s most difficult match-up whether blocking or receiving. Koyack and Welch must force themselves onto the field to be able to use the two and three TE sets. Koyackj’s pass-catching ability may be the next piec in the developing offensive mosaic.

Cornerbacks – Jackson and Russell are still struggling with playing man-to-man without penalties. We will see very good receivers against OU, Arizona State and USC, though OU may not have a quarterback to find and hit them. Rest assured that Taylor Kelly of ASU will. Cole Luke will be brought along, and if Devin Butler can pass Lo Wood we may have some building depth. This could be a two level grade bump by year end if the starters return to 2012 form. Jury’s out. But we’ll know by Halloween.

Running Backs – Atkinson can run the ball, but if he cannot catch the ball, he will not play. Carlisle is very good, and getting better. But Bryant and Folston have the ability to really improve this group. Again, fans don’t like to hear it, but a lot of great tailbacks have been brought along slowly. Coaches must have patience; fans seldom do.

Quarterback – What you see is what you get. Rees 2.013 is levels above Tommy 2.010 and Tommy 2.011, but he has limits. Caterwaul all you want, he has no fumbles and two interceptions in three games. He has worked hard and been coached up. “From each according to his abilities, to each according to his needs.” And that is how the coaching staff approaches all the players, including #11. The Linebacker (the Bar) illuminati have detailed charts on Rees’ limitations; Kelly and Martin illuminate and elevate what he can do.

Safety – Collinsworth and Farley are not as big or athletic as the best safety pairs in the country. Shumate is taking time to adjust to the position, and had reduced snaps against Purdue. Hardy is now getting snaps, and Redfield will get better with time. With depth development, this unit could be movin’ on up soon.

NOTE TO FANS: No man steps in the same river twice, and we as fans need to get comfortable with different units rising and falling each year. We don’t know the future, but our Safety and Running Backs and Tight Ends and Wide Receivers could easily be BCS bowl Caliber in 2014.

We will next update these rankings after OU. Note: Don’t look for a Sooner score next Saturday. They are idle. Keep that in mind. They will come to South Bend ready.

These next three Saturdays will tell us a lot. When midnight strikes on October 5th we’ll have a much better idea where this team, and this program, stands.

WHAT WILL WE SEE AGAINST MICHIGAN STATE?

(2) One of the nation’s finest rushing defenses, giving up only 98.6 yards per game in 2012 and a total of 274.4 yards per game. While their early schedule has included only USF from a BCS conference, the 2013 Spartan rush defense has allowed only 50 yards rushing per game. The Spartans front seven will provide the best test so far in 2013 of the Irish offensive line and rushing attack.

(3) Shilique “The Freak” Calhoun, who has scored three touchdowns for the Spartans. Think that’s a low number? Well, Shilique is a Soph Defensive End! Yes, Shilique was rated three stars by Rivals.

(3) On the other side of the ball, the Spartans attempt to establish the run first, and pass afterwards, using their physical offensive line. New starter Connor Cook is mobile. Can Notre Dame’s defense keep him below the 50 yard mark?

(4) The last two years, Notre Dame has won, 31-13 and 20-3. The Spartans, pretty much, play the same type and level of football every year (more so than our other opponents, except Stanford) and this year’s final score will provide a good yardstick to where we are.

(5) The first of three successive opponents who can stress test one or more areas of Irish squad. It is unlikely that either MSU or OU or ASU will finish the season in the Top 10, but each is stronger than two of our first three opponents, Temple and Purdue.

(6) Will the blitz packages and man-to-man coverages show improvement? Man to Man better, as we play three pretty good receiver sets in our next three opponents: OU, ASU, USC.

(7) Will the burgeoning depth at WR and RB start to blossom in time for the October/November run.  Of Bryant, Folston, Robinson, Prosise, Onwualu or Fuller, will one or more take the great leap forward?

We started a new “winning streak” last Saturday. It’s one in a row, but is preferable to a loss. Onward and upward.