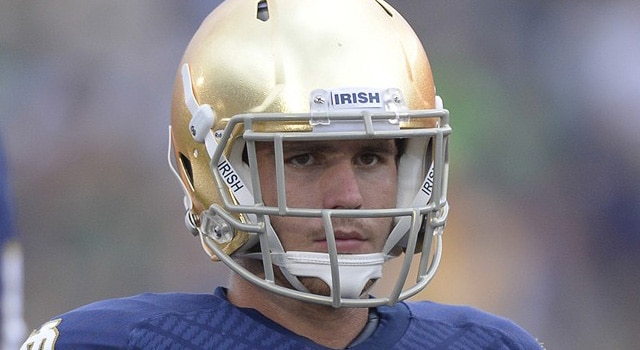 Over the past several weeks UHND.com has presented a series detailing which Notre Dame players have ventured onto the “Now or Never” precipice.  In a separate series, UHND will begin to detail those Notre Dame players on the verge of a breakout campaign, starting with tight end, Durham Smythe.

Durham Smythe’s commitment to Notre Dame was rapid and unexpected.  The Belton, TX, native and Class of 2013 recruit had been committed to the University of Texas since March of 2012, though the Longhorns’ staff began to worry about Smythe’s status after the talented Lone Star State tight end cancelled his official visit to Austin in December.  One month later Smythe had pledged to play his Saturdays in South Bend.

Though listed as a 3-star on Rivals.com, Smythe boasted an elite offer list, holding scholarship offers from the likes of Florida, Georgia, Michigan and Texas.  What made Smythe unique and coveted by major college programs were his intangibles.  At 6’4” and 230 pounds, Smythe already possessed great size, and his ability to catch as well as block made him an attractive tight end recruit.

Burnt Orange Nation, a media outlet for the Texas Longhorns, felt the loss of Smythe’s commitment was significant, stating that Smythe was “the most well-rounded tight end prospect Texas had landed in years.”

Why Durham Smythe May Break Out

The number one reason Durham Smythe may have a breakout season in 2014 is opportunity.  Redshirting his first year on campus, the Texas native was given time to learn Notre Dame’s system as well as study the nuances and habits of then-starting tight end, Troy Niklas, an eventual 2nd round NFL draft selection of the Arizona Cardinals.  Sitting out his first season also allowed Smythe to fill out his frame, adding 12 pounds of muscle since enrolling at Notre Dame last summer.  With the departure of Niklas to the NFL, an opportunity exists to step into the second tight end position in a very similar manner to Ben Koyack last season.

Notre Dame’s coaching staff began raving about Smythe’s potential last December during Notre Dame’s bowl practices, with the emphasis placed on his pass-catching ability.  Armed with a year of strength training, however, the blocking aspect of Smythe’s game is beginning to develop, and the talented Texan may be finally ready physically to compete.

Notre Dame head coach Brian Kelly was effusive with compliments toward Smythe after this year’s annual Blue-Gold game, telling the media he believes Smythe will be a “key contributor” to the team in 2014.

If the redshirt freshman tight end fails to break out in 2014, it may actually be due to forces beyond his control.  Last season Notre Dame ran numerous two tight end sets out of necessity, but how often Brian Kelly and offensive coordinator Mike Denbrock utilize the formation this fall is a legitimate question.  With the return of star quarterback Everett Golson, the depth and talent at the wide receiver position and a trio of running backs ready to burst onto the scene, the two tight end formation may be replaced by more traditional spread formations, limiting Smythe’s opportunities.

Another obstacle to Smythe’s emergence is courtesy of a crowded depth chart.  Notre Dame signed two very talented tight end recruits this past recruiting cycle in Nic Weishar and Tyler Luatua, and though the Fighting Irish coaching staff may prefer to redshirt both players, word leaking from campus is that Weishar is already making waves.  Could a true freshman who is too talented to redshirt enter the scene and take reps from Smythe?

The scope of the competition extends beyond the incoming freshman class and includes Smythe’s own classmate, Mike Heuerman.  While Heuerman has seemingly struggled to bulk up since arriving at Notre Dame one year ago, it’s worth noting that Heuerman was a blue-chip recruit more highly rated coming out of high school.  Smythe may currently hold the edge over his classmate, but for how long?

Whether or not Durham Smythe will have a breakout season in 2014 is a tough question to answer given the multitude of talented playmakers that will be clamoring for the football now that Notre Dame’s offense should finally awaken from its four year slumber during the Kelly regime.  The lack of opportunities could diminish Smythe’s chances to truly breakout this fall.  However, the praise Notre Dame’s staff has placed on Smythe is a strong indication they feel the Texas native possesses unique abilities that may lead him to being the next elite tight end at Tight End U.

Smythe will not be an All-American this season, nor will he produce eye-popping statistics.  But Fighting Irish fans should not be at all surprised to see Smythe make numerous plays throughout the fall schedule that offer a preview of how very special of a football player he will likely be during his career at Notre Dame.