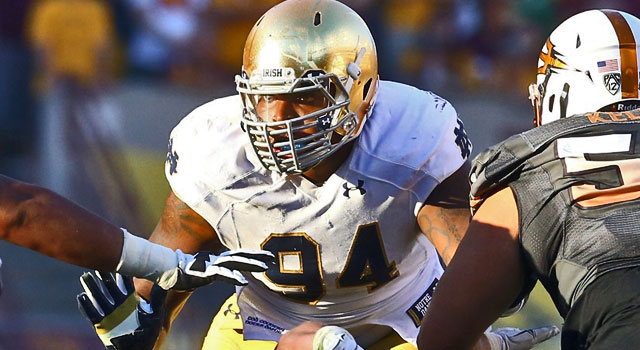 In 2016 Notre Dame will have to replace two of the most dominant players in college football – Jaylon Smith and Sheldon Day, but they are not the only stars the Irish will be tasked with replacing in 2016. On top of these two tremendous players, the Fighting Irish will have to replace captains Joe Schmidt and Matthias Farley in addition to Romeo Okwara, Keivarae Russell, and Elijah Shumate.

Jaylon Smith, the Indiana native, and Butkus Award winner last season was considered to be a top ten pick in this year’s NFL Draft, until his injury in the Fiesta Bowl. Sheldon Day, another resident of the Hoosier State, was at times unstoppable for the Irish. Day will likely be selected in one of the early rounds of this year’s upcoming NFL Draft. Players such as Schmidt and Farley meanwhile will be leaving behind a lot of experience and leadership, something a young Notre Dame team will be looking for throughout the 2016 season.

With all of that in mind, here is a look at how the Irish defensive depth currently looks as the Irish enter the off-season.

Taking a look at the secondary, the Irish will likely be starting Drue Tranquill and Avery Sebastian (assuming a 6th year is granted by the NCAA) at the safety positions. It is still unsure how big of an impact safety Max Redfield will play for the Irish in 2016. He was one of the best players in the country coming out of high school, but Redfield has had his share of ups and downs at the University. Incoming freshmen Devin Studstill and Spencer Perry will also be competing for playing time at the safety positions. Both Tranquill and Sebastian have seen their fair share of injuries. Tranquill was having the best game of his career at Notre Dame, helping stop the run game against Georgia Tech when he made a terrific play on the ball and jumped up in celebration. When he landed his leg crumbled underneath him and he injured his knee, a microcosm of Notre Dame’s injury filled season. Sebastian, a graduate transfer from California Berkeley never saw any playing time for the Irish in 2015 because of his injury. Hopefully his knowledge and age can help him become a key leader for next year’s defense and become the player the scouts had so highly ranked out of high school.

The cornerback position was a position of weakness for Notre Dame last season. KeiVarae Russell started off the season very slow, having missed the entire 2014 season. Towards the end of the season it appeared he started to find his rhythm, but he will unfortunately not be back for the Irish this season as he prepared for a NFL future.

Although the Irish are losing Russell, I was very impressed with Nick Watkins in the Fiesta Bowl. Notre Dame will need him to step up in order to have the defense that all Irish fans are looking for in 2016. On the opposite side of the field Cole Luke has been a consistent cornerback for the Irish. Although he hasn’t yet become a lockdown conrer, he also hasn’t been a liability for the Irish. I believe he definitely has the potential and his development will be a key factor for the Irish.

In addition to these cornerbacks Notre Dame will add Devin Butler, Shaun Crawford and possibly Torri Hunter Jr., and Shaun Crawford who was hurt before the season even started, and would’ve potentially been a starter for the Irish according to reports from Notre Dame Spring practices. I will be interested to see if Tori Hunter Jr. plays on the defensive side of the ball next season. He is a tremendous athlete, even playing on the baseball team, he will likely not receive much playing time because he will most likely be a starter this year at receiver. Butler meanwhile was set to start the Fiesta Bowl over Watkins before breaking his foot in practice.

While the losses in the secondary are substantial, the most important positions to replace on the defensive side of the ball will be in the linebacker corps. James Onwualu will come back at SAM with a lot of experience for the Irish. I can’t wait to see what Nyles Morgan can do for the Irish at MIKE after he had a tremendous freshman season where he racked up the tackles. Morgan could be a more athletic upgrade from Joe Schmidt last season if he has learned the ins and outs of the Notre Dame defensive required to captain the defense at the MIKE.

Te’Von Coney will likely take over Jaylon Smith’s spot at outside linebacker. He suffered a shoulder injury in the Fiesta Bowl which was the cherry on top to a horrible injury season for the Irish. When healthy, Coney will likely be battling for his position against Daelin Hayes, one of the top linebacker recruits in the country out of Michigan. He has a lot of athleticism and potential to be another great linebacker.

The defensive line can be a real strong spot for the Irish in 2016.  The return of Jarron Jones will be a huge boost for the Irish DL.  Jones showed in limited action in the Fiesta Bowl that he could be a disruptive force in the middle of the defense – even after not playing a meaningful down in over year.

Jerry Tillery had a really good season for the Irish in only his freshman year and could slid over to Sheldon Day’s vacated starting position. College football experts have already said that Tillery has the potential to be one of the best linemen in the country in the upcoming seasons if he lives up to his potential. He will be joined by Daniel Cage, Isaac Rochell, Andrew Trumbetti, Jay Hayes, Jonathan Bonner, Grant Blankenship and most likely incoming stud freshman, Khalid Kareem.

This depth chart is still to be determined as Notre Dame will look to add a few more names to the roster on National Signing Day in just a few weeks – especially 5-star LB’s Ben Davis and Caleb Kelly.  Still the two most important things to be aware of on the defensive side of the ball in 2016 are injuries and Brian VanGorder’s scheme. I can’t think of almost any sports team in the last year that had as many injuries as the Irish.

By the end of the Fiesta Bowl, the Irish were playing with backups at almost every position. Notre Dame’s best player, Jaylon Smith, got hurt and then their backup true freshman came in to the game to get hurt the very next drive sending in Jarret Grace, a senior who almost suffered a career ending injury just a short time ago. All of this on top of a third string cornerback, Tillery and Redfield’s suspension, and the season ending injuries to Crawford, Tranquil, and Sebastian.

On top of all these injuries the Irish have struggled under Brian VanGorder’s system. His aggressive style of defense has not turned out the way Irish fans had hoped. Countless mistakes on defense led to long touchdowns to wide open receivers and trick plays. The Irish definitely need to make some adjustments on the defensive side of the ball heading in to 2016 in addition to hoping for some better luck on the injury front. Brian Kelly has finally got his spread offense where it needs to be, now it’s time for the defense to return the Irish to glory.