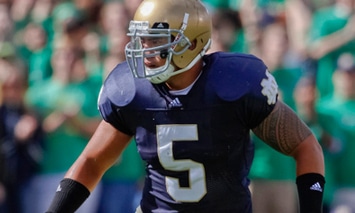 Matt may be contributing from time to time this summer as part of our pre-season coverage, so welcome Matt and let him know what you think of his list in the comments.  And if you like this list, we have a series of posts that will launch on Monday that you’ll love.

1. Manti Te’o, Inside Linebacker, Junior – The Hawaiian Hitman has been a fan favorite ever since his 11th hour signing day decision to go to Notre Dame and spurn arch rival USC. Te’o has had a tremendous effect on the defense with his uncanny ability to read offenses, shed blockers, and crush the ball carrier. In 2010 Te’o led the defense in tackles with 133 and his 21 tackles vs. Stanford were the most by a FBS player since 2007.

The thing that separates Te’o from other linebackers in the nation is the passion and the swagger he plays with which is backed up by his performance on Saturdays. No one can ever question whether or not Manti has the heart of a football player. Manti is expected to be 100% from off-season knee surgery and will compete with Boston College’s Luke Kuechly as the premier inside linebacker in the college game.

2. Michael Floyd, Wide Receiver, Senior – Floyd shocked Irish Nation when he decided to come back for his senior season after a tremendous junior season in which he caught 12 touchdowns and had over a 1000 yards receiving. Floyd then put his senior co-captain season in limbo when he was booked for a DUI on the Notre Dame campus. Expected to complete his legal obligations as well as team obligations before the fall coach Brian Kelly has said it is completely up to Floyd to make sure he misses no games in 2011.  Floyd’s captain status, however, is not guaranteed to be returned even if the star receiver is reinstated.  As one of the top 5 receivers in the college game one could argue that Floyd is by far the most important part of the Fighting Irish offense. Ever since his freshman season Floyd has dominated the college game. The only problem has been keeping him healthy and wearing the Blue and Gold every Saturday. This season Floyd should set all-time ND records in catches, yards, and touchdowns. With his size and strength expect Floyd to shatter those records my mid-season.

3. Harrison Smith, Free Safety, Senior – A year ago people would have scoffed at the notion of the Knoxville, TN native being a top 20 player on the Fighting Irish let alone a top 5. But last year with the emergence of a new coaching staff Smith excelled and was easily one of the best free safeties in the country. His 7 interceptions were the most for an Irish defender since 2002 (Shane Walton’s All-American season). Harrison’s athleticism has always been through the roof but finally his knowledge of the defensive schemes along with assignments were picked up flawlessly. The fifth-year senior is the only player in Irish football history to record more than 200 tackles, 15 tackles for loss and 15 pass breakups in a career. The 6-2, 214 pound free safety is a legit preseason All-American candidate and will serve as an Irish co-captain with senior Michael Floyd in 2011.

4. Gary Gray, Cornerback, Senior – While it’s almost impossible to find any true lockdown corners in the collegiate ranks fifth-year senior Gray has proven that he appears to be on the cusp after a very productive senior season. Gray is another player who benefitted from first year defensive back coach Chuck Martin who improved both his coverage and tackling. Gray started all 13 games and had 66 tackles along with 7 passes broken up and 1 INT. Gray is not only a great cover corner but he can also step up against the run and stuff the outside. In fact it would be hard to argue that Gray was one of ND’s best tacklers last year in terms of form and technique. Coming out of high school in Columbia, SC Gray was considered one of the elite corners in the nation and was a tremendous coup for the Irish. He was heavily recruited by all the SEC schools and at one time was committed to his hometown Gamecocks. This year expect Gray to shoot up NFL draft boards when all is said and done and once again establish himself as one of the elite corners in the game.

5. Darius Fleming, Outside Linebacker, Senior – In terms of the upperclassmen it would be hard to find a quicker pass rusher than Fleming. Fleming has steadily seen his sack numbers go up every season and would love to double his output from his junior season (6). The versatile outside linebacker can play with a hand down or in a two-point stance in the 4-3 base defense and with his speed and quickness I expect to see Fleming in the backfield a lot during his senior season. Fleming was a heavily recruited linebacker out of Chicago and since he has arrived in South Bend he leads the Irish in tackles for loss as well as sack yardage. With a trio of highly touted freshmen coming in I expect to see them push Fleming to new heights and have a monster senior season.

6. Cierre Wood, Tailback, Junior – In order for the Fighting Irish to get back to being a BCS Bowl contender they are going to need a healthy and extremely productive season from Wood. Last season Wood took over full-time starting duties with the injury to senior Armando Allen and shined in his limited carries. Wood was ranked as a top 10 player nationally by The Sporting News coming out of Santa Clara HS (CA) and has the big play ability to break off long touchdown runs that haven’t been seen at Notre Dame since Julius Jones was in the backfield. In terms of importance one could argue that Wood is the most vital part of the Notre Dame offense with the lack of scholarships at the tailback position. Wood has the extra gear and quickness to also be a threat in the passing game. I expect to see Darius Walker-like production out of Wood in 2011.

7. Trevor Robinson, Guard, Senior – The former 1st-team USA Today All-American stepped in almost right away at Notre Dame to become only the 5th freshman to start on the offensive line (Sam Young, Ryan Harris, Brad Williams, Mike Rosenthal) in 2008 and the former Nebraska commit has not given up his offensive guard spot since. He has started 27 of the past 35 games at guard and brings a solid base at 6-5, 300 with an appetite to be as aggressive and nasty as any guard in the nation. He has the ability to pull and trap on an inside running play along with a sweep to the outside. His size along with his mobility separates Robinson and it’s a testament to the amount of talent ND has that he is only ranked 7th on this list.

8. Zach Martin, Tackle, Sophomore – The redshirt sophomore from Indianapolis stepped in last year and not only excelled protecting the always important QB’s blindside at left tackle but was also very productive in the run game with a push that opened holes for Cierre Wood. I think Martin is one of the most underrated player on the roster because he committed to the Irish early in the process and the state of Indiana isn’t known for producing top notch FBS players. If you watch his tape you can tell his technique is sound and he carries a chip on his shoulder which he uses to pancake defensive ends and blitzing linebackers with regularity. Martin in 2 years will be a top NFL prospect at left tackle.

9. Ethan Johnson, Defensive End, Senior – The 6-4, 300 lb defensive end enters his senior season as the active leader in sacks (12.5) despite playing both tackle and end for the Irish. After sliding to the outside in Bob Diaco’s 3-4 in 2011 he managed to up his sack total for the 3rd year in a row along with his total tackles. This year expect the senior from Portland, OR to have a productive season in which he will be more of a run stuffer while also batting down passes with his long wing span on the outside. Johnson has been somewhat underrated since he arrived in South Bend. He missed his senior season in high school after spraining his knee in the first game yet he still managed to start 4 of 13 games for the Irish during his freshman season with 5 tackles for loss. It’s not out of the realm of possibility that he and fellow defensive end Kapron Lewis-Moore feel the pressure from the likes of incoming freshmen Aaron Lynch and Stephon Tuitt by stepping up their games and having huge senior seasons to keep their playing time. Competition is always a good thing and with Johnson expect it to push him to new heights in 2011.

10. David Ruffer, Kicker, Senior – Another modern day Rudy except this walk-on is a legit All-American. Ruffer last year was a finalist for the Lou Groza award after connecting on his first 23 field goals attempts (Notre Dame record) in his career. Ruffer had never even put on football pads till he decided to try out for the Notre Dame kicking job during his sophomore season. The William & Mary transfer student who gained notoriety for kicking for Siegfried Hall in interhall games has gone from walk-on to rock star in less than 2 seasons. His 3 field goals in the Sun Bowl tied an Irish bowl record. He also had 10 touchbacks on kickoffs last season.