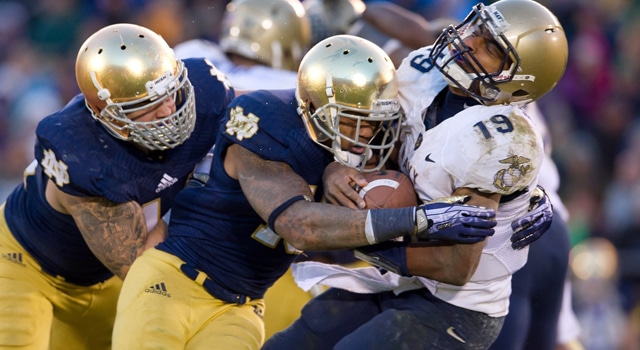 Notre Dame’s depth took yet another hit on Friday as news broke that the Irish will be without safeties Eliar Hardy and Elijah Shumate for their showdown with Stanford on Saturday night according to the Chicago Tribune.

According to the Tribune, both Hardy and Shumate will not travel with the team to Palo Alto. Irish Illustrated tweeted that they were told the reason for both not making the trip stemmed from being alte for a team meeting by Hardy’s father.

Friday’s news is yet another blow for a defense that has been ravaged by injuries this year as the Irish get ready to face the most physical offense they have seen all year.  Compounding matters for the Irish is the fact that Shumate and Hardy are two of the better tackling safeties on the Notre Dame roster.

Notre Dame was already going to be without opening day starters Jarrett Grace and Louis Nix while having the limited services of hobbled players such as Sheldon Day, Ishaq Williams and Kona Schwenke.

With Shumate and Hardy out, Austin Collinsworth and Matthias Farley are going to have to step up their games – especially Farley who has had issues with tackling throughout the season including last week when a missed tackle turned a gain of a few yards into a near touchdown by BYU.  With the physical Stanford offense, both will need to play their best games of the season.

Eliar Hardy had been playing very well of late after being virtually written off by most fans.  Since the Irish have played the academies though, Hardy has been a regular for the Irish and displayed solid tackling – something Notre Dame will sorely need tomorrow night against the Cardinal.

Freshman Max Redfield and sophomore John Turner could also be asked to play larger roles for Notre Dame this weekend with Hardy and Shumate out.  If Notre Dame really gets in a bind, CJ Prosise played safety last year and could potentially fill in as an emergency reserve should the situation arise.