No End in Sight to Everett Golson Transfer Speculation 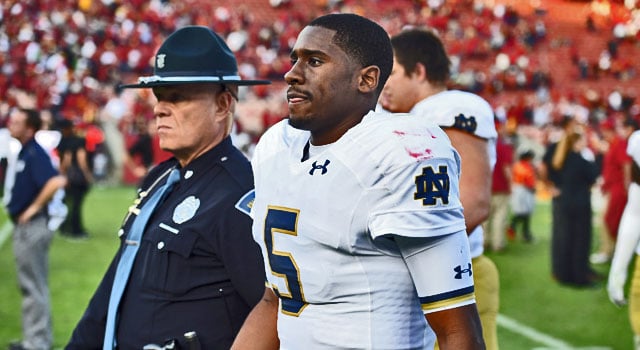 Senior quarterback Everett Golson has had an unorthodox career trajectory at Notre Dame. Originally a North Carolina verbal commitment, Golson flipped his pledge to Notre Dame and enrolled early after an academic scandal began to unfold in Chapel Hill under the leadership of then-head coach Butch Davis. After leading Notre Dame to a national championship appearance in the Fighting Irish’s first undefeated regular season in decades, Golson would become embroiled in his own academic scandal which would ultimately force him off the team. The Myrtle Beach (S.C.) native avoided the path of least resistance and re-enrolled rather than transfer to another program, only to lead Notre Dame to a turnover plagued season that ended with talented backup quarterback Malik Zaire starting and earning MVP honors against LSU in the Music City Bowl.

Despite Everett Golson being widely reported as in the lead in this spring’s quarterback competition against Malik Zaire, rumors have continued to persist that Golson is a transfer risk, causing apprehension amongst Irish fans. And Irish fans should be concerned – there are more reasons for Golson to leave than stay.

Golson used his time away from Notre Dame in the most productive way possible by working with quarterback guru George Whitfield on his mechanics and the way he grips a football. What was most telling about his experience with Whitfield, however, was when Golson was asked how he was paying for such tutelage.

“At this point, I don’t know if it’s politically correct to say it like this, but it’s a business decision for me,” Golson said to sportswriter Bruce Feldman. “I’m hoping that it’ll pay off in the future.”

Like nearly every college athlete that straps on a helmet on Saturdays during the fall, Golson’s dream is to play in the NFL, and he believed in that dream enough to imply he paid a quarterback coach thousands of dollars out-of-pocket in order to invest in that dream. And submitting to a quarterback competition when you only have one last chance to impress NFL scouts isn’t exactly the best way to protect an investment.

Throwing 14 interceptions and fumbling the football 12 times throughout the 2014 season afforded Malik Zaire an opportunity to prove himself after two years of waiting, and Zaire made the absolute most of it, showcasing to the staff and fan base he possesses an impressive skill set. Golson may currently lead his head-to-head showdown with Zaire but for how long? Will Kelly pull Golson when he creates a turnover? How about after two, or possibly three? Or simply run a two quarterback system? While it is likely a conversation involving such scenarios will take place between Golson and Kelly, why should Golson stay and gamble with his future when the option to leave for a less crowded location and play immediately is available?

Initial rumors connected Golson to LSU, a destination that makes sense given the inconsistent quarterback play in Baton Rouge. Soon-to-be junior Anthony Jennings was completing less than 50-percent of his passing attempts and averaging only 165 yards passing per contest last season. Rising sophomore Brandon Harris – though a talented former 4-star recruit – only mustered a 21-percent completion rate for 58 yards in LSU’s defeat at the hands of Auburn this past fall. With likely Heisman frontrunner Leonard Fournette – who averaged over 13 yards per carry against Notre Dame – at running back and a young but talented defense, quarterback is the missing piece for a truly special season at LSU, and Golson could step in and make an immediate impact with little to no competition.

Some may argue that switching programs during the summer is too short a time span to learn a new offense and grow accustomed to a new team, but it wouldn’t be the first time a quarterback felt the pinch and transferred to another institution for one season. Star NFL quarterback Russell Wilson recently told the media he was forced out of N.C. State by then-coach Tom O’Brien when Wilson indicated his desire to play minor league baseball for the Colorado Rockies during the summer rather than focus completely on football. Wilson utilized the graduate transfer rule to immediately enroll at Wisconsin and ultimately captured a Big Ten Championship, exposure that helped propel Wilson to a successful NFL career.

Others have argued Golson has unfinished business at Notre Dame which will cause him to stay, but such points have no merit. While the senior quarterback may have fallen short of a national championship, should Golson decide to leave, he will do so in an accomplished manner. For all the bumps along the way Golson will have played a pivotal role in turning Notre Dame’s program around on the football field, and he would leave Notre Dame as a graduate, a major accomplishment considering the obstacles that had to be overcome.

Whether or not Golson will stay or go remains to be seen. But given the current state of the program, leaving Notre Dame may be yet another “business decision” Golson has to make.

Scott Janssen is a blogger for the Huffington Post and has authored several nationally-featured articles, including an appearance on MSNBC as a sports contributor. He talks football 24 hours a day, much to the chagrin of his wife and those around him. Scott can be reached at scottjanssenhp@gmail.com or follow him on twitter.