Everett Golson’s Strange Journey Brings Him Back to Notre Dame 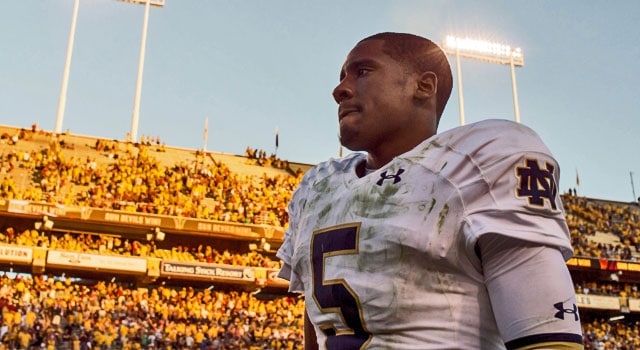 Everett Golson is returning to Notre Dame.  Again.  Two years after Golson returned to Notre Dame following his academic exile for the 2013 season, Golson will again be returning to participate in Notre Dame’s Pro Day after spending the 2015 season as a graduate transfer at Florida State.

Golson raised some eyebrows a few weeks ago when he said that he wasn’t sure whose Pro Day he would attend – Notre Dame’s where he spent three years or Florida State’s where he transferred to for his final season of eligibility.  Tuesday Golson’s story came full circle when news broke that he would return to South Bend to take part in Notre Dame’s Pro Day along with teammates he would have ended up leading in 2015 even if he didn’t beat out Malik Zaire in the summer following Zaire’s broken ankle.

For Golson’s the news brings him back to a place where he experienced one of the most tumultuous careers of any Notre Dame player in recent memory.  Many forget that Golson wasn’t even originally committed to Notre Dame when he was recruited for the class of 2011.  Golson was committed to North Carolina before Brian Kelly came calling late and uncertainty surrounded the Tar Heel program at the time.

It was a sign of things to come for Golson and Notre Dame.  Following his red-shirt season in 2011, Golson won the starting quarterback job and led the Irish – with some help from Tommy Rees – to the national championship game against Alabama where he looked like one of a few players who belonged on the same field that night.  Unfortunately that night, so early in his career, would be the high water mark of his Notre Dame career.

What followed for Golson was a downward spiral no one could have predicted that January night in Miami three years ago.  Golson’s rollcoaster 2014 season which saw him go from Heisman candidate to the bench in record time opened the door for Malik Zaire in the spring of 2015 and ultimately led to Golson’s decision to transfer for the 2015 season.

After picking one of the absolute best scenarios possible by heading to Florida State to potentially fill the shoes of Jameis Winston, Golson once again found himself on the bench by the end of the 2015 season.

And now, Golson will return to Notre Dame one more time looking for a chance to revive a career that at looked very promising multiple times over the years whether it be his performance against Alabama, his hot start to the 2014 season, or his time at Florida State before his benching.

Golson faces an uphill battle in his journey.  He’s never had the ideal size for a quarterback that the NFL is looking for, but he will also have to answer questions about why he was unable to hold onto the starting quarterback position in 2014 at Notre Dame or Florida in 2015.

He’s got the talent.  He always had.  What he’s never had, however, is consistency or the poise NFL scouts are looking for.  A Pro Day, however, should be right up Golson’s alley.  Such an event should allow Golson to showcase his wares – his mobility, his rocket arm, and his accuracy without having to face a pass rush.  What will be interesting to see, however, is how much chemistry Golson still has with the Notre Dame receivers that he will be throwing to since he hasn’t thrown a pass to any of them since the Blue Gold Game last April.