Notre Dame’s schedule consists of all 3 service academy opponents this season. They will tangle with Navy October 28th, Air Force November 11th, and Army a week later on the 18th. Whenever playing a service academy, you not only go against their football team, but their history as well. The players on the field pride themselves in fighting for their country and working harder than any other student that goes to a place like Penn State or Syracuse where you could just throw on sweats and head to class. There is no partying, skipping class, or sleeping through it at these schools. In fact, the only partying these schools do is on game day. Saturday. Saturday is the day when all the students are brought together to have some fun, make some noise, and party. Honestly, that is what makes the games against these schools so special. The unity you see from the fans. And when you take the history and pride of a service school…and put it into the same stadium as the mystique of a Notre Dame, it seems pretty special.
The service academies play each other every season for the Commander in Chief’s trophy. This trophy goes to the team that wins the most games out of the round robin and has been awarded since 1972. The Air Force Academy has taken 16 times, Navy 8 times, and Army 6 times.

This trophy was named after the President of the United States who is the Commander in Chief of the service academies. Many presidents have given the trophy out themselves. Current President George W. Bush gave out the trophy during a ceremony at the White House in 2002, 2003, and 2004. Former President Bill Clinton presented the Trophy to Army in 1996 after the Army-Navy game at Veterans Stadium. In many ways, this trophy is the like the National Title to these schools since they usually don’t compete for the ultimate prize. The trophy gives these schools something to look at and be proud of when it is won and displayed on their campus.

As stated above, the Irish will meet the Naval academy late in October. In fact, the last time these 2 teams didn’t meet during the season was back in 1927, and the last time Navy actually beat the Irish was in 1963. Yes, the rivalry has been one sided. Notre Dame has won 69 of the 79 meetings between the schools, but that doesn’t mean the 2 teams don’t have mutual respect for one another. In fact, that’s what makes the rivalry so special…the fact that these schools have a love and respect for one another once that game is over. The story about this unique relationship is an interesting one.

During World War II, enrollment at the University of Notre Dame had fallen lower than it had been in years. Students couldn’t attend the school or had to leave the school so they could fight for their country during the War. The future of the school was looking very dim because of this whole war episode…and then the United States Naval Academy came knocking on the Irish’s door.

The Navy needed a place where more of their men could train and get ready to serve in the war…and Notre Dame was buried financially and needed some assistance. Knowing that both schools could help each other, Navy used the men it had no room for to help fill the voids at Notre Dame left by the students serving in the war. They sent thousands of their students to South Bend, giving Navy a place to train and Notre Dame some financial help.

The respect shared by both teams is exercised every time the 2 schools play. It was even more evident this past season when Irish head coach Charlie Weis had his players stand with the Navy players and sing the Naval Academy’s alma mater at Notre Dame Stadium following the game.

It seems like every few years we hear about this rivalry being shut down because Navy has been struggling on the field…but as long as the 2 teams share the respect they already do with each other forever, which we suspect, the game will continue being played yearly. Navy-Notre Dame is a tradition, and one that will go on as long as there is a Navy and a Notre Dame.

Two weeks later the Irish will pack their bags and head to beautiful Colorado to take on the Air Force Academy. Air Force sworn in its first cadets in 1955 at a temporary location as the site at Colorado Springs was being constructed on. In 1958 the first students at its current location moved in.

Although a relatively young school, there has been some controversy at the Air Force, which has made playing football somewhat difficult to focus on at points. During the Vietnam War which in the 60s and 70s, war protestors took advantage of the fact that the Air Force campus was open to the public and spent hours and days at a time cursing at, spitting at, and threatening the students and faculty at the academy. Cheating scandals have also rocked the school on numerous occasions. In 1965 a cheating ring was discovered and 109 students were expelled from the school. In 2003 rape allegations were brought against students at the school during on campus drinking parties. Those who were allegedly assaulted said that their reports of the crimes to the Academy leadership were ignored.

Despite all the distractions, Air Force has chugged along and made themselves a very successful football team. Game day at the Academy is said to be 2nd to none, as the United State’s most beautiful planes fly over the stadium before kickoff. They were the #5 team in the nation when the 1985 season ended, losing just 1 game all season. They have appeared in 17 bowls and won 8 of them. They also have a legendary coach in Fisher DeBarry, who has a record at Air Force of 156-88-1. They have great home field advantage, and their largest crowed ever was 56,409 against the Irish in 2002 when the Irish sent them home unhappy with a 21-14 victory. Recent studies also show that they have the 2nd most recognizable helmet in the country behind Michigan. The two teams have good history against each other as well. In 1996 the Irish lost 20-17 during Lou Holtz’s final year as Notre Dame head coach. The Notre Dame faithful watched in shock as the unranked Falcons downed the #8 ranked Irish by 3 points in overtime. But like in all good rivalries, the Irish got revenge the next time the two teams met in 2000. When it looked like the Air Force Falcons would shock the Irish once again, coming back from 18 points down in the 4th quarter to tie the game and attempt a game winning field goal, Glen Earl blocked the kick as time expired to send the game into overtime. Notre Dame held Air Force to a field goal and Joey Getherall ran a reverse in from 9 yards out to give Notre Dame the 34-31 victory and some revenge from the tough lose 4 years earlier.

Air Force will meet with the Irish for the 27th time in history this fall…and although these 2 teams do not see each other annually…the fire is still there when they play each other. Bill Parcells coached against the Irish in 1978, Chad Hennings played through the late 80’s to early 90’s against the Notre Dame…and who could forget guys like Jerome Bettis and Tim Brown playing against the Falcons? A young rivalry? Very. But will there be tension in the air this coming November? You bet there will be.

Notre Dame will then wrap up their service academy tour when they face off against Army the next week at Notre Dame Stadium. Army is located at West Point New York and was established in 1802. It is by far the oldest service academy out of the three. The gigantic campus at West Point covers over 16,000 acres of land, making it one of the largest campuses in the world.

Besides off all this, Army has a rich football tradition. They have piled up 3 national titles in their history and went back to back in 1944 and 1945. They were considered a top tier program back in those years and remained a very strong team throughout despite their recent struggles. Three Cadets have also won the Heisman trophy: Don Blanchard, Glen Davis, and Pete Dawkins.

Army shared a heated rivalry with the Irish back in the 40’s and 50’s when both teams were considered college footballs finest. The “4 Horseman” nickname for the Notre Dame backfield was also born during one of these games. The Irish have owed a lot of their history to Army as well. Back in 1913 when many considered Notre Dame a middle of the pact school, and yet to establish themselves as a dominant division IA team, they beat Army using the forward pass as the keystone of their offense. Up to this point the forward pass was used rarely if at all, and the 1913 Irish victory featured the Irish throwing the ball more than any other team had up to that point. Legendary coach and player Knute Rockne was on the receiving end of many of these passes, and the forward pass became the phenomenon it is today in large part due to that game. 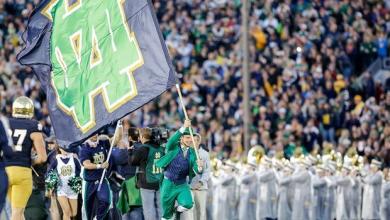 Duranko’s Digest: State of the Irish