Finding Some Positives from the Opener 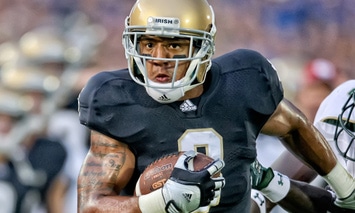 It’s been about 36 hours since Notre Dame’s season opener ended with a thud and while the loss still stings it’s time to move on and start looking towards where the Irish go from here.  With that in mind, here are several positive performances and bright spots in an otherwise disappointing display from the Irish to start the season.

Michael Floyd. The brightest spot on offense had to be the dominating performance Floyd turned in despite facing double teams.  Floyd set a career high with 12 catches and ended up passing Jeff Samardzija as the all time leader in receptions at Notre Dame in the process.  He also added to his record total of receiving touchdowns with another pair of scores.  Like the rest of the Irish offense though, Floyd got off to a slow start before erupting in the second half.  Tommy Rees looked for Floyd early and often and the senior wide receiver responded by getting open despite the double teams.  What I liked most about his performance though was how he was pleading for the football in the 4th quarter when it mattered most – Notre Dame needed more of that attitude from other players throughout the game.

Cierre Wood. Until the score started to get out of hand and Notre Dame was able to run the football, I loved the offense we were seeing (minus the turnovers obviously) that was featuring a heavy dose of running the football with Wood.  The junior back showed that his off-season workouts paid off by finishing his runs strong and running with toughness.  He recorded his first career 100 yard performance with 104 yards on 21 carries despite Notre Dame largely abandoning the running game in the second half.  If Wood can keep running like he did Saturday all season, the Notre Dame ground game should be just fine.  Like Floyd, the brightest part of his performance came in his attitude.  When asked about his performance after the game, Wood, who had the best game of his career, told reports that it was a bad day because the Irish lost.  Notre Dame needs more of that attitude as well.

Tommy Rees. This one is rather obvious, but Rees performance despite some mistakes was pretty darn good.  Whenever you can rack up almost 300 yards passing in a half of football – even if you are one dimensional – against a legit BCS conference opponent its impressive.  Rees still takes some chances and makes some questionable decisions such as his interception on the first play after the second weather delay, but it is pretty obvious that Rees should be under center next week in the Big House.

Kapron Lewis Moore. The defense was solid on Saturday holding USF to just over 250 yards of offense and Lewis-Moore was one of the more impressive performers for the Irish defense.  Lewis-Moore had 1.5 tackles for loss to lead the Irish and was tied for second on the team with 8 total tackles.

Tyler Eifert. Eifert had just 1 catch for 4 yards in the first half with Crist under center.  In the second half with Rees in control of the offense he recorded 5 more for an additional 89 yards including a 37 yarder on third and 10 which set up Floyd’s first touchdown with Notre Dame still stuck at 0 on the scoreboard.  Eifert displayed his speed on the 37 yarder and showed why he is considered one of the nation’s elite tight ends.  If Notre Dame is going to be more efficient on offense this week, Eifert has to be a larger part of the game plan early on.

Robert Blanton. Blanton had perhaps the best defensive play of the game when he blew up a South Florida bubble screen for a loss of  3 yards on 2and and 7 on the drive right after Notre Dame scored its first touchdown.  South Florida had successful run a number of bubble screens up to that point, but Blanton sniffed it out and blew it up.  Overall, he was the most solid performer in the secondary in the opener with good coverage and sound tackling.

Louis Nix. We have heard a lot about Nix throughout the off-season and on Saturday we saw why.  Nix was disruptive when he was on the field and ended up picking up 7 tackles – that’s a lot for an interior defensive lineman in this defense.

The offensive line. The OL might have been the most disciplined unit on the field for Notre Dame on Saturday.  No procedure penalties.  No holding penalties.  More than solid pass protection and running lanes for the running backs.  After the up and downs along the OL over the last few years their performance on Saturday was a big positive and reason for some optimism that this offense can be pretty good if the other units eliminate the mental errors and mistakes.

Kick-off coverage. In a game filled with terrible special teams play from Notre Dame, the lone bright spot was the kick-off coverage units.  Bennett Jackson picked up where he left off last year in leading the Irish kick coverage unit.  South Florida averaged 22 yards per return on three kick-offs (when taking the onside return out of consideration) with Bennett Jackson making two of the stops with the help of freshman Troy Niklas on one of them.   Jackson was the special teams player of the year in 2010 and could be headed in that direction again this year – especially if the other special teams units continue to be as underwhelming as they were Saturday.

Early offensive game plan. I’ve touched on this already, but the early offensive game plan featuring a heavy dose of the running game was very good to see.  Kelly was really trying to establish the run game early and it was very effective until turnovers forced the Irish to become one dimensional.  Rees didn’t have the luxury of the running game since he entered the game down 16 so it will be interesting to see how he does with a competent run game behind him.  Michigan’s defensive front seven is not very big and the Notre Dame offensive line should be able to open things up for Wood and Jonas Gray again this weekend.

Third Down Defense. South Florida was just 2 of 14 on third downs on Saturday.  That kind of defensive production is going to earn a win almost every Saturday.  Of course, when an offense turns the ball over five times you are going to lose almost every Saturday so the defensive performance was negated by Notre Dame’s turnover woes.  If Notre Dame can continue to get that kind of third down defense the rest of the year though, the Irish will be in good shape.  Getting off the field on third down has long been a problem for Notre Dame until the end of last season and in that department it looks like the Irish picked up right where they left off.

As you can see, despite some of the ugliness – the turnovers, penalties, dropped passes, fumbles, etc – there were still some positives from Saturday’s loss and if Notre Dame can clean up the mental mistakes and build on these positives, a very good season is still very possible.