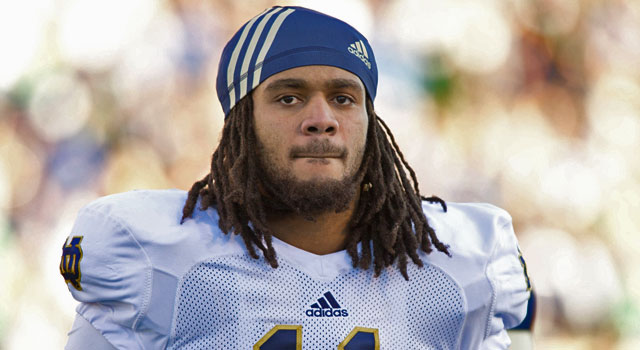 When Brian Kelly opened spring practice last month he didn’t have much of an update on the future of would be senior defensive Ishaq Williams.  Three weeks later, the Fighting Irish head coach still couldn’t offer much clarity on the future of the one time 5-star prospect as things remain very uncertain with Williams’s future.

A prior commitment apparently kept Kelly and Williams from connecting in more depth.  “He was short on time,” Kelly explained.  “He had to get back to Chicago for a prior commitment.  I’ll get a chance to spend some more time with him.  We plan on doing that some time in April.”

Event though Kelly has plans to spend time with Williams later this month to talk in more detail, it doesn’t sound like he has a very clear understanding of where Williams’s mind is at.  “I don’t know that I have full clarity on it,” Kelly said.  “We know that there are some hurdles for him academically that he has to work through and he knows that as well.  I think what well try to get some clarity on its what his intentions are academically.”

Those things that Kelly referenced are academic hurdles Williams will need to pass following his exile last year following the academic investigation that cost Williams, Keivarae Russell, and Kendall Moore the entire 2014 season. “Things that he’ll have to take care of in the summer time just to get the ball moving for his ability to be reinstated,” Kelly added.

The fate of Williams really remains the only mystery of the “Academic 5” from last summer.  It’s been widely reported that Russell’s return is almost all but a formality at this point.  Davaris Daniels has declared for the NFL Draft and participated in last week’s Pro Day.  Moore was a 5th year senior last year and has no more eligibility so he will try to catch on with a NFL team this summer.  The 5th member of the group, Eilar Hardy, was the only one to play last year and he will transfer to Bowling Green once he graduates.

Kelly’s remarks regarding Williams throughout this off-season have not necessarily been glowing.  Some of that is just reading through the tea leaves and pure speculation, but his tone when discussing Williams has not been the same as it’s been when he’s discussed Russell.

Still, getting Williams back in the fold would potentially be a nice boost for a defensive line that while starved for depth last year actually looks pretty well stocked for 2015.  One area that Williams could potentially help is in the pass rush department though.  While Williams only has one career sack, he spent his first two seasons playing outside linebacker where he struggled to adjust.  Last year much was expected of Williams as he moved to his more natural position of defensive end, but all of that optimism was lost following the results of the academic investigation.

For now though, not much has changed on the Williams front and it sounds like the earliest we might know anything more definitive might be the end of this month.