After a lackluster victory over the Florida State Seminoles, the Fighting Irish are back in action this weekend to take on the Louisville Cardinals. As Notre Dame continues to climb the polls, the college football world continues to talk about the looming matchup with Clemson. Before the Irish can even think about the Tigers, they must focus on improving and this week’s matchup with the Cardinals.

The current forecast for GameDay shows a 20% chance of rain with a high of 50 degrees and a low of 39.

Sophomore slump for Coach Satterfield? After a terrific first season as the Louisville Head Coach, Satterfield and the Cardinals are off to a poor start in 2020. The program was ranked to start the year and had high expectations this fall, but perhaps this was a little premature for the Satterfield era.

Scott Satterfield went 51-24 at Appalachian State and helped transcend that football program. Early in his tenure at Louisville, it is uncertain how the program will look in the next few seasons.

Dual-Threat Quarterback Malik Cunningham headlines offense. Perhaps the biggest hurdle for Notre Dame this game will be the option attack of the Louisville Cardinals. Last weekend, the Notre Dame Defense showed a weakness against the running abilities of Florida State’s quarterback Jordan Travis who tallied 96 yards on the ground.

This season Malik Cunningham is 73 for 124 (58.9%) through the air with 9 touchdowns and 5 interceptions. On the ground, the Louisville quarterback has 49 attempts for 84 yards (1.7 yards per carry), and 3 rushing touchdowns, which is a little misleading due to the 14 sacks the Cardinals offensive line has allowed.

Irish Defense is far from flawless. Let us preface this by saying many college football defenses looked dreadful last weekend. Alabama gave up 48 points to Ole Miss, LSU surrendered 45 points to Missouri, and North Carolina allowed 45 points to Virginia Tech. The Fighting Irish had not played a game in nearly 21 days, and turnovers on offense put Clark Lea’s defense in horrendous circumstances.

Nevertheless, Florida State put up 405 yards on Notre Dame, and Jordan Travis rushed for 96 yards at quarterback. The dual-threat of Travis seemed to give the Irish struggles, as well as several deep balls that beat the Notre Dame cornerbacks. These are all areas that need to be figured out before the monumental Clemson matchup in a few weeks.

What are the strengths and weaknesses of the Irish Offense? Without a doubt, the Notre Dame running attack is one of the best in the country. Even though it was Florida State, the Irish put up 353 yards on the ground behind an impressive offensive line. Kyren Williams may even be the best running back of Kelly Era, and Chris Tyree has looked fantastic as a true freshman.

Conversely, Ian Book and the passing attack looks different each week. Tommy Tremble, Javon McKinley, Braden Lenzy, and Michael Mayer have all looked good at times, but there is no consistent receiving option right now. Ideally, Ben Skowronek and Kevin Austin Jr. will be healthy heading into the Clemson matchup.

Notre Dame Offense vs. Louisville Defense: The Cardinals have given up 34 points per game this year, including 46 points to the Georgia Tech Yellow Jackets last Saturday. Even though Louisville is 1-3, this may be the best team Notre Dame has faced to date.

The Irish Offense was rusty last week and still put up 42 points. Look for Tommy Rees to continue to develop the passing attack this Saturday against this Louisville Defense.

Louisville Offense vs. Notre Dame Defense: Scott Satterfield’s offense has averaged 29 points through four matchups. Conversely, the Notre Dame Defense is holding opponents to 13 points per game, even though the competition has not been the greatest.

I expect the Cardinals to put up some points this Saturday, but I also predict a better performance from Notre Dame’s Defense.

Special Teams: Louisville’s kicker, James Turner, is 4 for 4 this year with a long of 40 yards. Conversely, Jonathan Doerer is 3 for 5 on the season with a long of 48 yards.

Notre Dame Special Teams kept the Seminoles in the game because of a muffed punt. These mistakes will undoubtedly cost the Irish against Clemson. Brian Polian and the Irish special teams must have a clean game against the Cardinals, and every opponent moving forward for that matter.

Turnovers and mistakes impeded the Irish against Florida State. It is only three games into the season, and there are still question marks surrounding Notre Dame, and the Irish have yet to face a quality opponent. However, it is for certain that there are a lot more strengths this season than weaknesses.

Brian Kelly has Notre Dame on a 21-game home winning streak and a 9-game winning streak overall, so it is kind of hard to be too upset with the performance against the Seminoles. But the Irish need to start working on their areas of concern this weekend. They cannot expect to make it to the College Football Playoffs on talent alone. I do not think it will be a blowout, but Notre Dame will win handily.

5 Key Matchups for Notre Dame vs. Louisville This Weekend 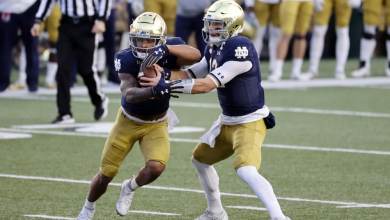 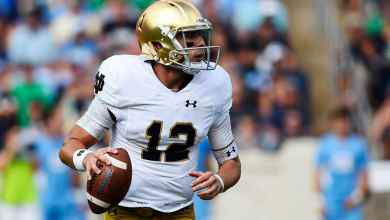 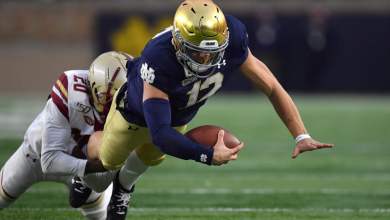 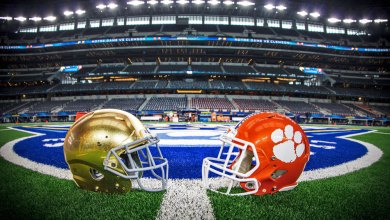