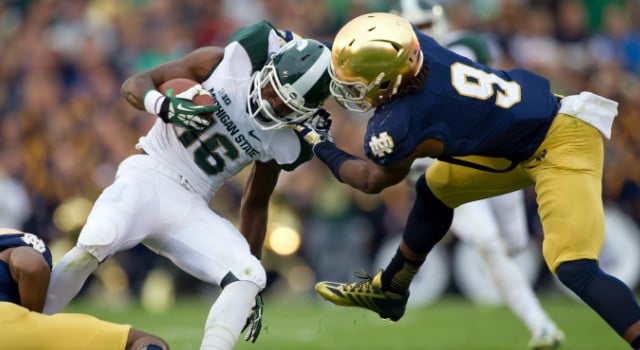 For this week’s Irish Blogger Gathering, Mike from NDNation answered our questions while Aaron from Strong & True provided us questions to answer.

As always, here are this week’s entries:

1. After watching Andrew Hendrix play for almost an entire half against USC and be unable to muster any sort of offense for the Irish, has your view of Tommy Rees changed at all and how important is his availability for this weekend and the rest of the season?

My view of how crucial he is has certainly changed, although I’m reluctant to judge Hendrix based on one appearance since we’ve seen him play at least marginally better in other appearances. My view of how poorly he’s being used by the coaching staff certainly has not, and perhaps has intensified given how bad Hendrix’s throwing was. Given our top two quarterbacks have limitations when trying to put the ball into the air, it seems even more necessary for the coaching staff to create an offensive philosophy for the season that doesn’t depend on throwing the ball. Yet that seems to be what was done in the four months they had to prepare.

2. The Notre Dame defense played dominant football after allowing USC to drive 97 yards on their first drive. Give me one reason to be optimistic that they can continue that level of play the rest of the season and one reason to be cautious that it was just the result of USC’s offensive futility.

The reason I’d give to be optimistic is a combination of the return of Sheldon Day and the steady improvement of Stephon Tuitt. Tuitt seems to be getting stronger every week, and probably was due for a breakout week like this. With Day demanding more attention than his replacements, the probability of continued play quality increases.

The reason I’d give to be pessimistic is this was an SC team that, while talented in the starting ranks, has absolutely no depth. Their offensive performance peaked on the first drive and then slowly withered as players either tired or were lost to injury, whether for a play or a half. They seemed to move the ball well when they had gas in the tank, and other teams will have a much deeper tank.

3. Brian Kelly has said that Jaylon Smith will be on the field a lot this weekend against an option offense even though the Irish have had success by playing an extra safety or corner in place of the drop backer. Is this a good idea given Smith’s success so far or too much to place on a true freshman?

I believe Smith has a tougher time playing against the pass than the run. He seems to have excellent instincts where the ball carrier is going and tends to make more plays than he misses on run defense. Given Air Force is much less of a danger when throwing the ball, which would be Smith’s weakness, having him play more in a situation where he can make the best use of his strengths like this weekend seems to be a good plan.

Bonus: Will we see any more of freshman running back Tarean Folston who has been surprisingly silent absent from the Irish gameplan after his long run against Oklahoma?

Bonus: Rumor has it Folston was a little banged up but should be returning in short order. Since ND (as usual) has a significant size advantage on the offensive line versus the Zoomie defense, a game plan emphasizing physical play would seem to me to be right up Folston’s alley, so if he’s ready, I would expect to see him out there.