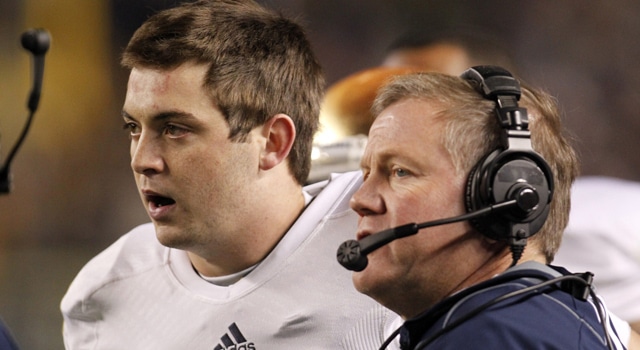 I am a little late to the party this week, but here is UHND’s weekly entry for the Irish Blogger Gathering.  Like last week, each Notre Dame blogger in the IBG submitted one question for everyone to answer.  We then all answer every question but our own.

I’ll start off with my question and links to everyone else’s posts for this week.

My question: After running the ball effectively in the first half, Notre Dame all but abandoned the run in the second half against Pitt even they didn’t trail at all until there was less than 9 minutes remaining in the contest. Is Notre Dame’s lack of a commitment to the running game this year as opposed to last the reason the Irish themselves right back where they were in 2011?

NDtex from HerLoyalSons: Stephon Tuitt’s ejection for “targeting” (and I use that term very loosely) definitely added more frustration to an already horrid game. I’m all for promoting player safety, but I definitely don’t think this new rule is the way to go. Do you agree? If so, how would you change the rule? If you’d like to keep it, what are your reasons for leaving it alone?

I agree that the rule is not the way to go because right now the referees just have too much power over the potential outcome of games for judgement calls.  The replay booth does have a chance to take away some of that control by overturning an ejection but in the case of Tuitt, they confirmed the ruling on the field even though both Brent Musberger and Kirk Herbstreit and most of the viewers at home disagreed.

Player safety does not to be of utmost importance at the collegiate level especially since the guys taking and delivering the hits are not getting paid to play the game like the pros do.  For a professional athlete there is a certain degree of occupational hazard involved.  That isn’t the case with college athletes though.

Aaron from Strong & True: With two games left before bowl season is at hand there is work at hand to finish off the season strong. What must the Irish do well on offense and defense over the last two games to give themselves a chance to get to 9-3?

Defensively, Notre Dame needs a fully healthy Louis Nix and the return of Kona Schwenke and Ishaq Williams to have the kind depth of front needed to survive a slugfest with Stanford.  Notre Dame may be able to get passed BYU without a full depth chart in the front seven (or as close to full as Notre Dame can get with the season ending injuries already suffered), but without all hands on deck against Stanford, Notre Dame’s slim chances will dwindle even more.

Offensively, the Irish will need to show balance and be able to run the ball finish 9-3.  If Notre Dame relies on the pass and abandons the run like they did in the second half against Pitt, the result is going to be the same as it was last weekend against Stanford certainly and possibly against BYU.  Can Notre Dame pound the ball against Stanford?  We haven’t enough of it this year to think it’s possible but that is what it is going to take.

Mike Coffey (NDNation.com): There are only so many things you can do during the season to correct the larger issues on a team, as most time must be spent on the opponent du jour. Name one issue you hope is at the top of the coaching staff’s list for this off-season and why?

I think the return of Everett Golson alone will make the offense more balanced and dangerous so if I could fix one issue this off-season it would be the special teams.  I just don’t understand how after four years, the special teams for Notre Dame are still so bad.  Kick coverage has been about the worst we’ve seen in the Kelly Era this year.  George Atkinson usually has at least one nice return a game but it is usually because of his speed, not because holes are being opened up for him.

Then there’s the punt return game.  It boggles my mind how Notre Dame can struggle so badly in this department.  TJ Jones had a couple nice returns early in the season where it looked like he got tackle by the turf monster more than anything, but since then, the punt return game has been almost non-existent.   Notre Dame doesn’t have a defense that can stop offenses on short fields consistently or an offense that can consistently drive the length of the field.  Having special teams units that could win the field position game would have made a big difference in 2013.

After four years of poor special teams play though, I’m not sure how much wishful thinking it is to think that it can be fixed completely this off-season.

Keith Arnold (Inside the Irish):  How much can you learn from one game? If you listen to some, the Irish’s loss to Pitt seems to have erased just about every bit of good that’s happened over the past four seasons. No doubt, the Pitt loss was one of the most disappointing of the Kelly era. But how do you personally measure the game and disappointment final score, and does it change the opinion you held of Brian Kelly at 7:59pm EST last Saturday?

The most disappointing aspect of the loss to Pitt was that it was a complete affirmation that Notre Dame is not nearly as close to being an elite program as we all thought last Thanksgiving weekend before the blowout to Alabama.  That blowout was easier to deal with since it was Alabama after all.  They are a juggernaut right now.  A loss to a mediocre at best Pitt team though?

I thought this program was past such losses but after playing with fire a couple times this year, Notre Dame finally got burned and lost to a team that it had no business losing to.  The loss didn’t wash away all the progress that Kelly made with the program, and I fully believe that this year is just a speed bump but at the same time a loss like that makes it difficult to get too excited for the final two games and bowl game.

With Notre Dame at 7-3, 8-4 looks like the best possible regular season record matching 2011’s disappointing season.  Given the injuries and Kelly’s reluctance to run the football, 8-4 is far from a given too.  BYU is going to come to town next weekend expecting to win and they very well could.  Either way though, last week’s loss was just another reminder just how disappointing the 2013 has been.  A year after playing for the national championship, Notre Dame’s bowl options would all have sound made up 10 years ago.  There’s no sugar coating that.