Here is my take on this week’s Irish Blog Gathering.  I missed last week’s in post World Series Championship bliss, but I’m back at it this week.  This week’s is hosted by Her Loyal Sons. 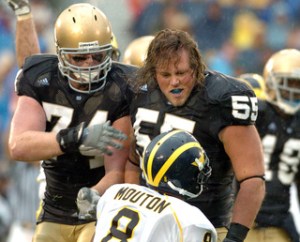 I agree with HLS with this one.  The pic of Eric Olsen from the Michigan game gave me hope that we might finally be seeing a little of the “nasty” that Charlie Weis spoke about 4 years ago at that first press conference.  Coming into the season I thought Michigan would be at least respectable this year so seeing the Irish beat down the Wolverines and have a little attitude in the process was very encouraging.  When I got home and saw this pic from the game I thought, “well, maybe we have turned the corner.” The next week we all saw that we had not yet turned the corner as we struggled to run the ball on Michigan State.  Eight games into the season we are still struggling to run the football and the defense has been anything but consistent.

2. Some of you may know that I (domer.mq) am a football stat geek. Which statistic do you think geeks like myself should really be paying attention to this season and why? (Can pertain to ND or CFB in general.)

In terms of Notre Dame football this year,  think the #1 stat that needs to be looked at is red zne scoring. We’ve been down right awful at times in the red zone and it has cost us at least two games – Michigan State and Pitt.  Against Pitt last weekend the offense got the ball inside the red zone 4 times in over time but could not put the ball in the end zone even once.  Against Michigan State, we turned the ball over twice in the red zone and had a penalty negated a first and goal situation in a third trip to the red zone.    If we had just put the ball in the end zone a couple times in both games instead of turning the ball over or settling for field goals we could easily be sitting at 7-1 instead of 5-3.

3. Seeing as how Boston College is nothing but an up-jumped program enjoying the luxury and soft Corinthian leather of an ACC schedule, which team from the current top 25 would you love to see this year’s Irish play this weekend in Fredo’s stead? Why? Do you think the Irish would win? Describe the game. Paint us a picture! I’ll get the popcorn!

As a Philly area resident who has to hear about Penn State more than I’d like, I would love to see the Irish get a shot at ending Penn State’s perfect season.  I don’t think we match up particularly well with Penn State, but we also have a passing attack which has the potential to be the best Penn State has seen all season.

4. Let’s dispose of the gradient colors and subtle vagaries of college football for a moment and answer this question with one of the supplied, absolute answers and a blurb defending your pick. No waffling! The Question: Why is Notre Dame unable to put away games when leading going into half time? The possible answers: 1) ND Players all have a soft, nougat center 2) The Coaches don’t want to tick off potential future employers 3) God doesn’t think it’s classy to blow a team out 4) The ND Fanbase can’t really stomach blowouts any more than they could stomach a protracted land war in Asia. Remember, you must pick one and you must defend it with great vigor!

I would tend to lean towards #4 because Charlie Weis, a Notre Dame alum, feels the same way about blowing teams out.  His NFL style of not embaarassing teams removes some of the killer instinct from this team.  Weis has said over and over that he won’t run up the score on teams and I think that takes some of the team’s edge away.  I’m of the school of thought that when you have your starters in the game, you play your game and don’t worry about pissing off the other team.  We has Pitt on the ropes and didn’t step on their throats when we had the chance.  The same can be said for the Stanford game when we took a 28-7 lead into the fourth quarter but nearly let the Cardinal back in the game before holding on to a 28-21 win.

5. Tennessee just began celebrating the career of Phil Fulmer today this week as he announced that he’d been given the opportunity to make it look like resigning was his idea. Certainly, this is a clarion call to ADs across the country to begin worrying over their tea that, should their current HC not work out, they wont get a shot at #s 1-5 on their candidate list. Tell us about an AD who may be looking at this move by Tennessee and acting a bit more aggressively towards a reduction in force of his current football staff now rather than later. And who might that AD be trying to seduce before Tennessee already has a “hand shake agreement” with the guy?

How about Syracuse AD Daryl Gross?  Greg Robinson’s seat isn’t even hot anymore – its a pile of ashes from burning up a while ago.  Robinson has taken a mediocre football program and turned it in a laughing stock.  Syracuse has a proud tradition in football and can certainly do better than the product Robinson has put on the field for the Orange.  A coach like Skip Holtz might also interest both teams since Holtz has experience coaching in the Northeast with UConn and in the South with East Carolina.  Syracuse might not be enough of a step up for Holtz, but you would think that they would at least make an attempt.

"I'm a Playmaker, I Can Change the Game"