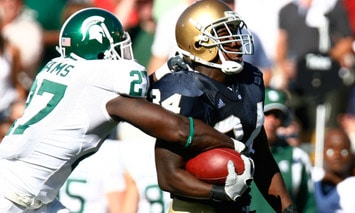 After a week off from the Irish Blogger Gathering, UHND is back in action this week – albeit a tad late.  Anyway, here’s our take on the questions for this week’s IBG which have been brought to us by Bad Trade.

1. Still trying to get the taste of last weekend’s game out of my mouth, so let’s start with something fun. With Sparty on its way into South Bend, give me your favorite memory of the ND-MSU series. I don’t care what it is: John L. Smith losing it, the image of MSU guarding against nothing, an actual game memory, whatever.
I’m going to go with the 1994 MSU game. I remember watching it as a 12 year old who only really knew of Notre Dame winning and winning big in the late 80’s/early 90’s and being pretty annoyed that Notre Dame wasn’t winning big against Michigan State. I remember thinking, wait a minute, this is Michigan State, Notre Dame should be beating the crap out of them by now. Instead, Notre Dame squeaked out a 21-20 win. Since that game, Notre Dame is 3-9 against Michigan State. I long for the days when a close win over Michigan State is gets me annoyed again.

2. Since 1997, Michigan State has won 9 of 12 games against the Irish. I view this as a classic case of Sparty having ND’s number. What worries you most about Michigan State this weekend?
Notre Dame’s ability to stop the run. Michigan State is going to want to keep the Notre Dame offense off of the field as much as possible so I think they’ll try to run the ball over and over again. That is exactly what they did last year and the Notre Dame offense never got into a rhythm and continually shot itself in the foot. The Irish offense should be able to march the ball up and down the field through the air on the Spartan defense, but they won’t be able to if they aren’t on the field.

3. Between my lingering bad feelings from last weekend and the history of this series in the last decade plus, give me a good reason or two or three to feel optimistic about a change in fortune for the Irish, because right now, I could use some optimism.

RELATED
Notre Dame Football Raised Their Ceiling, Did They Also Raise Their Floor?

4. As it is my week, I get to address my current ND obsession. Have the last two games changed your opinion/reinforced your opinion re: Charlie in the box versus Charlie on the field?
Charlie calls the pass play on 2nd and 10 whether he is in the booth or on the field. I don’t think him being the booth would have affected his play calling at all the last two weeks. He is who he is and he is going to throw the ball again in a similar situation at some point this season. The only thing I think we may have seen more of if Weis was in the booth was Kyle Rudolph. It seemed like Weis forgot he had an All American caliber tight end that Michigan didn’t have a linebacker to cover with.

5. If nothing else, I can count on one thing to look forward to on Saturday – tailgating. Anyone have a good recipe for me to try? I make no limitations on what it can be – a drink recipe, dessert, appetizer. So long as it can be made on a grill, camp stove, or ahead of time, I am happy to listen. The better the suggestion, the more likely you are to get invited to my own tailgate.
I’m not going to be much help in this department. I like simple things with my tailgating. A cooler full of beer and some burgers and brats is enough for me to be pretty happy with at a tailgate. The only time I mix much up for a tailgate is Navy week when I’ll drink plenty of Dark ‘N Stormies – the official drink of the Naval Academy. Thanks to UHND’s McSweeny and his naval buddies, I have grown quite found of these.

6. Finally, any predictions for the game? I encourage your predictions to involve something other than a final score, but otherwise, I make no suggestions.
In my weekly prediction on UHND I predicted a 34-23 Notre Dame win, but I could see this game be much closer and coming down to the wire. On the flip side, if Notre Dame can eliminate all of the mental errors they made last week against Michigan, I could see the Irish winning bigger. I’ll stick with my original prediction though and say that Notre Dame wins this one by 10 or 11 points.