IBG – Wake Up the Demon Edition 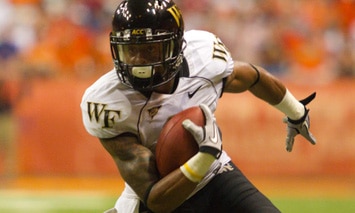 1. I don’t know anything about Wake Forest except that Tim Duncan went there.  Who is the Tim Duncan of the Wake Forest footballers, i.e., one guy that the Irish must game plan for on Saturday and why?

Chris Givens is a wide receiver that could give Notre Dame a lot of problems on Saturday.  He’s recorded 100 yards in all but two games this year.  Same with touchdowns.  He does his damage with big plays too.  He is averaging almost 18 yards a reception this year and has nearly 1,000 yards already with 8 touchdowns.  North Carolina is the only defense to keep Givens in check so far this year.  The Tar Heels held Givens to 42 yards on 6 catches for just a 7.0 yards/reception average.

In terms of receptions, Givens has been the model of consistency this season too.  He’s had either 6 or 7 catches in every single contest this year – no more, no less.  If Notre Dame can slow down Givens, they’ll walk out of Winston-Salem with a win.

2. Cierre Wood and Jonas Gray have been a solid running back tandem this year with Gray coming on strong in the last couple of games.  With a finite amount of opportunities for each back, how do you think BK should split the carries in the coming weeks?  Explain.

I would employ the play the hot hand approach with these two since both have had their moments when they’ve played better than the other.  Wood was on fire against Purdue while notching a career day.  Same could be said for Gray when he erupted for the 80 yard touchdown against Pitt or last week when he scored three touchdowns.  Both have been great this year so it would be hard to argue with whatever Kelly does here.  The only time I would definitely play Wood over Gray would be on passing situations since he is a better receiver out of the backfield and has really improved his blocking.

Another option would be to use Gray early running right at opponents to soften them up and then unleash Wood who is more elusive in the open field later in the games.  Like I said though, there’s not really a wrong way to use them in my opinion.

If Notre Dame gets some early leads it also wouldn’t surprise me to see Gray get a few more carries to help him improve his draft stock.  As much as Kelly says he only cares about what is best for Notre Dame (ie not liking having players who only see college as a stop gap to the NFL), he’s smart enough to know that producing high draft picks at the skill positions will only help recruiting.  Considering the last time Notre Dame produced a high round pick at running back was Julius Jones 9 years ago, Kelly would be wise to help Gray improve his stock over the next three weeks if the situation allows for it.


3. Andrew Hendrix did not play against Navy.  Without speculating as to the reasons why he didn’t play against the Midshipmen, do you think he’s being underutilized?  Why or why not?

I’ve said a number of times that I thought Hendrix should see more playing time because I am not sold on Tommy Rees as the long term answer at quarterback for Notre Dame.  The Navy game was a great time to get him some more playing time since Notre Dame was rolling throughout and the issue was never really in doubt.  For Notre Dame to upset Stanford Thanksgiving weekend, I think the Irish will need to pull out all of the stops too so getting Hendrix some more experience by then should be a priority over these next three games.

Not a whole lot.  Every year you can make a case for some awful team like that.  For instance, in 2007 Notre Dame beat Staford who beat USC who beat the crap out of us on our home field.

5. What’s your prediction for Saturday’s game against the Demon Deacons and why?  Bonus points if your answer is a Haiku.

Not much of a poet so I’ll just say that I think this game will be closer than people think.  Wake may be slumping recently, but they are a solid team with a good coach.  This game will also be their biggest game of the year and will give Notre Dame their best shot.  Where the Irish are mentally right now we don’t know either.  Notre Dame has been flat after two of their convincing wins this year too.  After thumping Michigan State, they squeaked by Pitt.  After destroying Air Force, they were flat against USC and got beat.  The only time Notre Dame has looked sharp back to back this year has been the Purdue and Air Force games.

I think Notre Dame will still win this game, but it’ll be a tough contest with the game still in doubt late in the second half before Notre Dame finally pulls away.