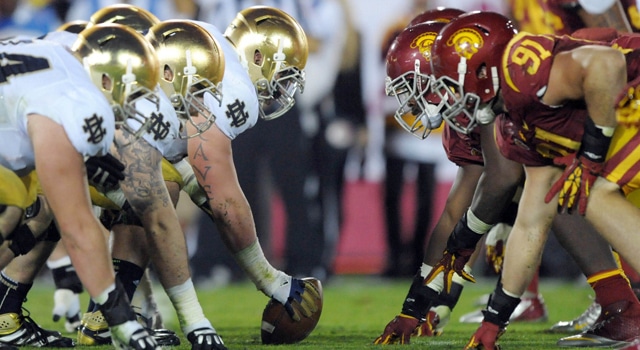 A view down the line of scrimmage during the game between Notre Dame Fighting Irish and the Southern California Trojans at the Los Angeles Memorial Coliseum. Notre Dame defeated USC 22-13. Mandatory Credit: Kirby Lee/Image of Sport-USA TODAY Sports

The IBG continues to forge on following the retirement of IBG founder Subway Domer and if there was one Notre Dame blogger who embraced the Notre Dame-USC rivalry it was Subway Domer. With that in mind, hopefully the Irish can out there this weekend and win just one for SD.

This week I asked Aaron Horvath of Strong and True a set of questions while I answered questions from Mike over at ND Nation.

1. Notre Dame bounced back from a rough loss to Oklahoma with a solid win over a ranked opponent. What from the ASU game has you the most optimistic heading out of that game and into this year’s show down with USC.

The play from the Irish defense in pressuring the ASU QB was definitely what jumped out for me during the Shamrock Series game in North Texas.

Pressuring the quarterback with using your down lineman is key to any defense. If your front can get pressure, that allows you to drop most into coverage and create turnovers by forcing the QB to hurry and throw before he is ready to.

So, simply … pressuring the quarterback is key this weekend against the Trojans.

This weekend the Irish must play within themselves to win. Just win. Style points are not needed this weekend. This year against USC will be different because the Irish have only one game to really look at to figure this Trojans team out. Once Lane Kiffin was fired, it seemed that new head coach Ed Orgeron told his staff to throw caution to the wind and last week’s performance against Arizona has everyone around the Trojans starting from scratch.

Needless to say, the Irish will have a tough time this week because they have no clue what the Trojans will throw at them.

Simply, to win this weekend, the Irish need to win the turnover battle. Very cliché, but very true.

3. Notre Dame was almost this exact same situation in 2011. They were 4-2 with the Trojans in town and a ton of elite recruits on the sidelines. What is the same and what is different about the 2011 match-up vs. this weekend’s and do you think things will play out differently for Notre Dame?

Bonus: After a few rough patches so far this year, would a win over USC give Tommy Rees a level of redemption?

I personally don’t think Tommy needs redeeming. I think he has done very well for himself already this season. In saying that, it would go a long way in his legacy to beat USC … again … He would be the first QB to defeat USC twice in his career since who?… Exactly …