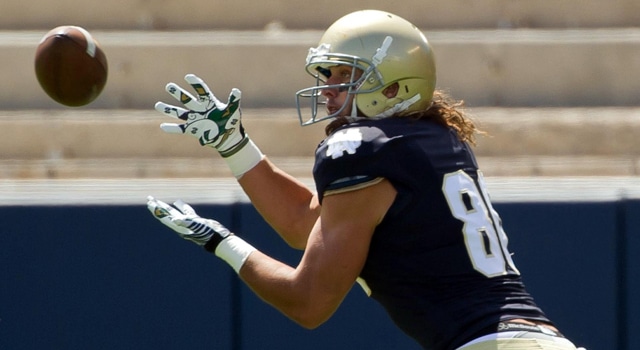 There is not a single player on the Notre Dame roster the Irish can ill afford to lose more than All American tight end Tyler Eifert. (Photo - Matt Cashore / USPRESSWIRE)

For the third year in a row, I am rolling out my yearly list of the 10 most indispensable players on the Notre Dame roster for the upcoming season – a list of players whose health status is going to make all of the difference between the kind of season Notre Dame fans hope the Irish are capable of and the kind of season that they pray isn’t possible.

Last year only one of the players in my list spent significant time on the sidelines – Braxston Cave – after four players for the 2010 edition found their names in the weekly injury reports more often than Brian Kelly and Notre Dame fans would have liked.

10. George Atkinson (RB) – It might seem strange to list a player here who won’t start and likely won’t challenge for starting position this season as one of the most indispensible players on the Irish roster, but the impact Atkinson provides on special teams is significant enough that he warrants mentioning here.  After years of poor kick-off returns and a complete lack of impact from the return game, Notre Dame found it’s most exciting kick return man since Allen Rossum some 15+ years ago.  Atkinson changed the momentum of the Notre Dame-Michigan State game with his first kick return touchdown of his career after it looked like the Spartans were going to make a game of it and his touchdown return against USC gave Notre Dame some desparately needed life when it appeared they were just going to sleep walk through last fall’s showdown with the Trojans.  Notre Dame has some other capable returnmen on the the roster, but after years and years of futility in the return game, Atkinson’s presence on the kick return unit will be pivitol to Notre Dame’s success in 2012.

9. Prince Shembo (OLB) – Notre Dame finally has some depth at outside linebacker, but Shembo has the potential to be a pass rushing terror on the edge of the Irish defense now that he has slide over to Darius Fleming’s vacated starting position – moreso than any of the other outside backers at least at this point.  Having that pass rushing threat on the edge of the defense is something that will allow for Notre Dame to compensate for a defensive backfield that will be lacking depth and experience in 2012.

8. Cierre Wood (RB) – Even with his recent two game suspension, Cierre Wood remains one of the most pivotal players on the Notre Dame roster in 2012.   Theo Riddick and George Atkinson should do a fine job filling info for Wood against Navy and Purdue, but once Michigan State, Michigan, Miami, etc start popping up on the schedule, Notre Dame is going to need the first home run threat they’ve had at the position since Julius Jones was lining up in the Notre Dame backfield readily available.  Riddick has spent the last two seasons at wide receiver and while Atkinson is very talented and I expect huge things from him during his Notre Dame career, Wood is the most experienced and explosive running back on the Notre Dame roster as of right now.

7. Braxston Cave (C) – When Braxston Cave went down to injury last year, many felt that the offensive line would be in trouble, but Mike Golic Jr stepped in and performed pretty well in Cave’s absence making Cave a little higher up on this list.  Despite there being some depth behind him though, Cave is one of the leaders of a veteran offensive line charged with protecting a rookie quarterback.  If Cave were to go down with another injury this year Golic would likely slide back over to center and the Irish would do some shuffling of the line, but his veteran presence is what the team would miss the most.

6. Jamoris Slaughter (S) – The Notre Dame secondary is very unproven heading into the season and Slaughter will be tasked with leading that group against some of the nation’s elite quarterbacks – Matt Barkley and Landry Jones immediately come to mind.  Slaughter is the most veteran player of the group and really started to establish himself last year afte injuries plagued him early on in his career.  The emergence of Matthias Farley this fall camp has push Slaughter a little bit down on this list, but needless to say he is vital to Notre Dame’s defense being able to keep those high powered offenses in check enough to give the Irish a chance.

5. Zack Marttin (LT) – After two more than solid seasons as a starting left tackle for Notre Dame, this could be the year Martin starts to get the attention he has been deserving in terms of off-season recognition on All American teams and award lists.  Martin has been outstanding as the left tackle for the Irish the last two years and is the most talented performer along the offensive trenches again this year.  Notre Dame is a little thin at tackle with Tate Nichols slightly banged up again so keeping Martin healthy and protecting Everett Golson’s blindside is a major priority for the success of this year’s offense.

4. Louis Nix (NT) – There may have been some competition in camp between Nix and Kona Schwenke, but the bottom line is no one on the Notre Dame roster has the size and ability to play the nose tackle position the way Nix can for the Irish.  Nix is a monster in the middle of the line who only began to scratch the surface of his potential last year.  With a year under his belt and another full off-season working with Paul Longo, Nix should continue his rise towards being an elite defensive lineman.  He might not quite reach that status this year, but he isn’t far off and that is why he is one of the important players for the Irish in 2012.  With the inexperienced secondary, Notre Dame is going to have to put pressure on opposing quarterbacks and collapsing pockets and opening lanes for the blitzing outside backers is something Nix can do better than anyone else on the roster.

3. Bennett Jackson (CB) – Jackson was always going to be one of the most indispensable players for Notre Dame in 2012, but the injury to Lo Wood moved Jackson way up this list as the only cornerback with any semblance of experience heading into the season.  Notre Dame has a lot riding on Jackson’s ability to be a top notch corner – much more than you would ideally like for a converted wide receiver with one season of back up experience at the position, but that is the situation Notre Dame is in this year.  There figures to be a little bit of shuffling at the other corner back spot even though true freshman Kei’Varae Russell has locked up the starting role, but Jackson needs to be a steady and consistent presence in the Notre Dame lineup for the defense to keep the Irish in every game.

2. Manti Te’o (ILB) – Defensively Notre Dame does not have a player as important to the success of the 2012 season as Te’o.  There also is not as large of a drop off in terms of talent and production at any one position on defense as there is at inside linebacker behind the Hawaiian native which is a testament as to just how good of a player Te’o is.  After posting back to back 125+ tackle seasons, the pre-season All American is poised to ascend to elite status this fall and will be counted on to improve on his turnover production in his final season of eligibility.  Te’o is the unquestioned leader of the Irish defense and is easily the most talented player on that side of the ball for the 2012 Fighting Irish.  If Notre Dame were to lose Te’o for any length of time, things could go very badly for a defense that will feature such a green secondary.

1. Tyler Eifert (TE) – In order for the Irish offense to reach its potential in 2012, Tyler Eifert is going to need to put together an All American season – something he is more than capable of doing.  With a true sophomore with no experience lining up at quarterback, Eifert will be a huge security blanket for Everett Golson as he gets his feet wet at the college level.  Eifert is also going to be counted on to be the primary source of replacing the production of Michael Floyd who will be catching passes for the Arizona Cardinals this fall.  Notre Dame’s latest star tight end was always going to be one of the most indispensable players for Notre Dame this season, but he became even more important when Alex Welch was lost for the season with an ACL injury.  Behind Eifert Notre Dame has some talent in Ben Koyack and Troy Niklas, but there is very little experience.