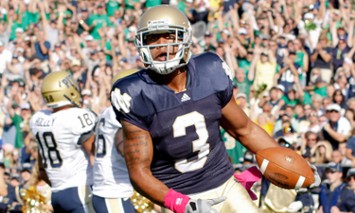 Michael Floyd will be looking to build on his Notre Dame record for career receiving touchdowns in 2011. (Photo - Icon SMI)

Notre Dame jumped out to an early lead for the second week in a row, but this time the Irish needed a late defensive stand to hold on for a 23-17 win over Pitt. Here are this week’s initial impressions.