Notre Dame’s bid to keep their undefeated season alive this weekend on Senior Day against Florida State just took a massive hit as news broke that starting quarterback Ian Book will be OUT on Saturday night.  Book, Notre Dame’s starter the last seven weeks and the nation’s leader in completion percentage, reportedly suffered injuries to his midsection and will not be able to play this weekend.

Book went down early in the first half against Northwestern last weekend but after being slow to get up, he return to action and played every down the rest of the way.  It appears as though the lingering effects of that hit, however, will keep Book out against the Seminoles.   Here’s the hit that Book stayed on the ground after.

This is the hit Ian Book took in the first quarter at Northwestern. Played through it, but appears the impact to the ribs/back lingered beyond last Saturday night. pic.twitter.com/sLpy2omLmw

This is a huge blow for Notre Dame.  The Irish offense, despite some sluggish starts, has largely thrived under the direction of Book after he took over for Brandon Wimbush in week four.  Wimbush will be back in charge of leading the offense this weekend in place of Book.

Wimbush was Notre Dame’s starting quarterback for week one’s win over now #4 Michigan – arguably one of the best two wins on any playoff contenders resume – so it’s not as though Wimbush is an incapable backup.  He did struggle ever since that game, however, and eventually lost his starting job to Book.  He’s been relegated to sideline duty ever since.

With Wimbush in command of the offense, expect to see a much different Notre Dame attack than the one we’ve seen the last two months.  Wimbush struggles with accuracy and the kind of throws that Book thrives off of.  Instead, look for Notre Dame to utilize Wimbush’s legs.  Working in Wimbush’s favor will be playing with Dexter Williams for the first time this year.  Williams was still serving his suspension earlier this year when Wimbush guided the Irish to a 3-0 start.

Notre Dame will now have to rely on their defense even more than they did earlier this season.  Clark Lea‘s unit will have to keep the Florida State offense off the scoreboard as much as possible.  They’ve done that all season so they should be up to the task.

RELATED
How Does Notre Dame Replace Jarrett Patterson for the Rest of 2020?

For Florida State, the news breaking now isn’t exactly ideal for their game planning but it’s also not the worst.  They can adjust their game plan accordingly, but just won’t have time to practice it before they travel to South Bned this weekend.  Had the news broke tomorrow night after they spent all week game planning for an Ian Book offense, Notre Dame would have had a decided advantage in deploying Wimbush in Book’s absence.

While Wimbush played well against Michigan and has shown the ability to win games like this – he is 11-3 as a starter after all (removing the Citrus Bowl vs. LSU since he was benched) – this elevates freshman Phil Jurkovec to the backup role.  He has only played in one game this year so if he would need to be called upon for any reason, he would still have two games of eligibility remaining.

As of now, reports are that the injury isn’t too serious and that there is still hope Book will be back next weekend when the Irish travel to New York to take on Syracuse in Yankee Stadium.  Expect Brian Kelly to be asked about this extensively this evening in his normal Thursday post practice press conference.

Reasons For Optimism For Brandon Wimbush And Notre Dame 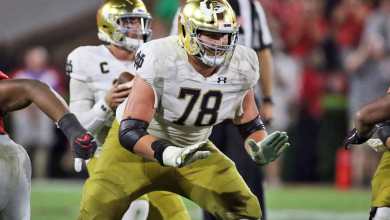 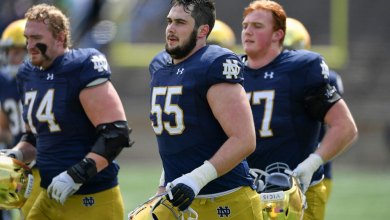 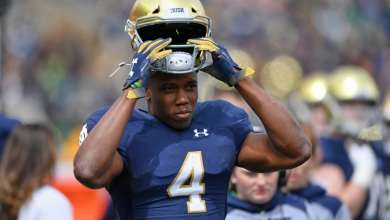