Is There a Power Struggle at Notre Dame? 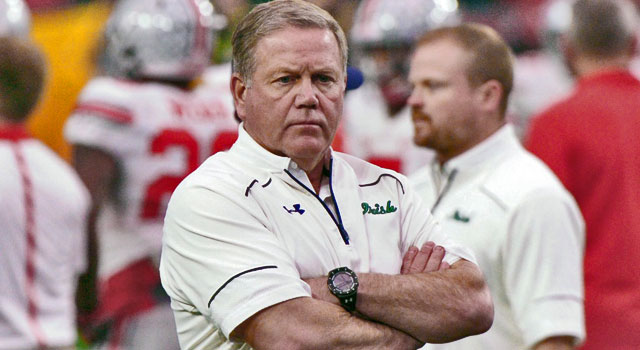 The statistics are nothing new. Notre Dame’s defense is ranked No. 101 nationally in points surrendered per game (33.5). The defense has allowed over 200 yards rushing per game under Brian VanGorder’s leadership and was the last of all the 128 FBS teams to register a sack, performances so poor it shouldn’t have been shocking when Duke handed Notre Dame its biggest upset in decades. Yet it was hard to feel anything but disbelief as the same Blue Devils team that mustered only 27 points in its first two games piled on nearly 500 yards of total offense and 38 points against a helpless Notre Dame defense. But the most troubling part of the weekend may have taken place long after the lights went out at Notre Dame Stadium.

Brian Kelly has won everywhere he’s been as a head coach. Kelly made three national championship appearances with Grand Valley State University, winning two national titles and boasting a better winning percentage than fellow Division II alum and former Ohio State coach, Jim Tressel. At Central Michigan Kelly turned around a CMU program that had long been a Mid-American Conference doormat, discovering and recruiting players such as NFL stars Antonio Brown and J.J. Watt that helped the Chippewas win their first conference championship in over a decade. At Cincinnati Kelly really hit his stride, posting a 34-6 record and notching two conference titles before accepting his current position in South Bend.

Brian Kelly is a winner, and for the first time in his career he has found himself in a position of true adversity. How would he handle the pressure of having to answer to the media after posting a 1-3 record when his team was in the AP’s preseason top ten? The reasonable expectation for a coach in such a situation is to circle the wagons around the program and reinforce the fact that while the results are unacceptable, the coaches and players are all in it together. Brian Kelly, however, opted for a more perplexing and disturbing approach and instead built a moat around his coaching staff, leaving his players to fend for themselves.

“Coaching had nothing to do with the outcome today,” Kelly said during his postgame press conference. “We’ve got to look for the guys that want to have fun and play this game with passion and energy and that’s where we got to go.”

After laying the blame at the doorstep of his players, Kelly took it a step further and doubled down on his protection of VanGorder.

“Actually that’s probably the one area that I feel better about today,” Kelly said when asked about one of the nation’s worst defenses. “We did what I wanted today in terms of coaching, and coaching had nothing to do with the outcome today. I was pleased from that perspective.”

The ramifications of Kelly’s decision to create an “us” and “them” dynamic between his coaching staff and his players are yet to be seen, but if former players are any indication, Kelly likely failed his first test of adversity in a big way. Former Notre Dame wide receiver DaVaris Daniels tweeted the following after hearing of Kelly’s press conference.

Sad when a head guy looks to place blame on everyone but himself once things go south. Typical for him tho?

While some may dismiss Daniels’ remark as the ramblings of a grudge-holder given his dismissal from Notre Dame for academic misconduct several years ago, it’s important to remember that this is not the first time Kelly has angered members of Notre Dame’s team by placing blame solely on their shoulders.

In 2011, Notre Dame suffered a brutal loss to the USC Trojans that snapped a four-game winning streak. When faced with criticism of Notre Dame’s performance Kelly was quick to remind the media he had only one recruiting class of his own on the roster, drawing a distinction between “his guys” and Charlie Weis’ holdovers. The comment did not sit well with a host of Notre Dame’s players, including team captain Manti Te’o, who tweeted after the remark, “Playin’ for my bros and that’s it!!!!”

Adding to the strangeness of the weekend is that less than 24 hours after Kelly drew a line in the sand regarding his staff news broke that VanGorder was fired, leading many to wonder if a power struggle is taking place in the shadows of the Golden Dome. Whatever may be transpiring behind the scenes, with eight games remaining all Notre Dame fans can do is hope Kelly receives a crash course in adversity before the 2016 season heads into an unrecoverable tailspin.

Scott Janssen is a blogger for The Huffington Post and has authored several nationally-featured articles, including an appearance on MSNBC as a sports contributor. He talks football 24 hours a day, much to the chagrin of his wife and those around him. Scott can be reached at scottjanssenhp@gmail.com or follow him on Twitter.