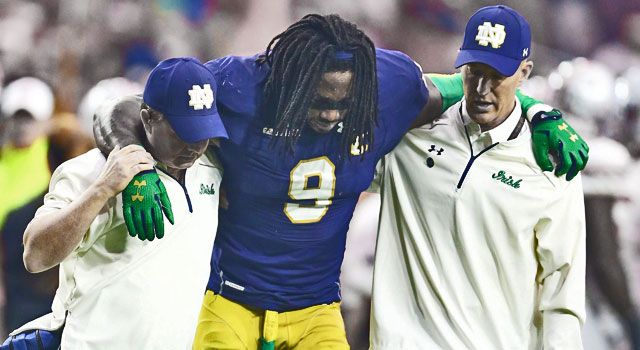 The good news for Notre Dame’s 2015 Butkus Award winning linebacker Jaylon Smith is that he is expected to make a full recovery from the nasty knee injury that earned him a ride off the field on a cart in last week’s Fiesta Bowl. The bad news is that Smith’s draft status still remains very much in question and the junior has less than a week to make his decision as to whether or not to return for a senior season and rehab a year before entering the NFL or entering this year and rehabbing with whoever rolls the dice in April’s draft on him.

Most mock drafts right now don’t have Smith in the first round, but a lot of that has to do with all of the uncertainty currently surrounding Smith. This latest news that Smith is expected to fully recover and that the injury was not quite as extensive as once feared, however, should move Smith back into an easy first round selection. Rumors immediately following his injury were that Smith suffered nerve damage in his knee – something that likely would have caused him to drop out of first round consideration.

Assuming his injury checks out as fairly “normal”, it is hard to image Smith falling out of the first round. A year ago running back Todd Gurley was drafted 10th overall after suffering a torn ACL in his senior season. The running back position is not nearly as much of a premium in the draft as linebacker – especially when the linebacker in question is a freakish athlete such as Smith.

Even with the successful surgery though, it is still likely that Smith will miss a chunk of playing time in 2016 whether it be on the collegiate or professional level. Gurley missed the first few weeks of the 2016 season and he suffered his injury much earlier in the season that Smith. A conservative estimate right now is that Smith could miss half of the 2016 season as he recovers.

Smith has until January 15th to make his decision – a decision that will likely come down to whether or not he and his advisors feel he can come back in enough time to display the explosiveness that has become the norm for him in 2016 to play his way back into the top 10 or if it’s in his best interest to recover with a NFL team without the added pressure of classes like he would have as a collegian. Smith’s $5MM loss of value insurance should he fall into the second round will be considered as well. Should Smith slide to the second round, he could collect $5MM and rehab with a professional franchise’s training staff.

All we know for now, however, is that the injury is not as bad as once feared and Smith should fully recover both of which should be music to all Notre Dame fans ear’s regardless of what jersey Smith wears next fall.