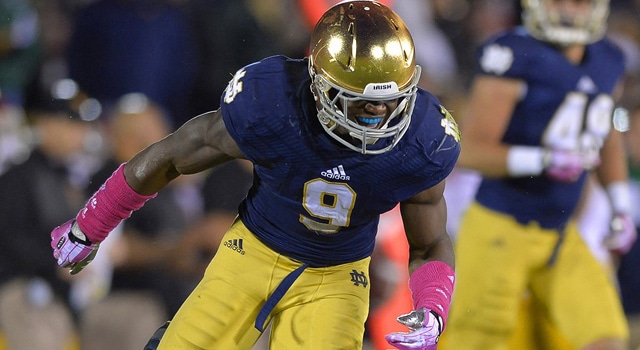 Occasionally a 5-star recruit immediately steps into a starting role as a true freshman and shows that his lofty recruiting rankings were dead on.  Luckily for Notre Dame and the 2013 Fighting Irish, it appears as though Jaylon Smith is one of those rare players who start living up to the hype from day one.

Thrust into a starting role this year with the sudden and unplanned retirement of Danny Spond, Jaylon Smith started every game this season and has improved each week for the Irish.  On the heels of back to back impressive performances, it’s become clear that he has quickly become one of the defenses best playmakers in the process.

Two weeks ago against Arizona State, Smith was all over the field and one of the main reasons the Irish kept the Sun Devils kicking field goals instead of extra points for most of the first half.   Then this past weekend, Smith made one of the biggest defensive plays of the season with an early third quarter interception that set the tone for a second half of dominance from the Notre Dame defense.

Seven games into the season Smith has 31 tackles, 3.5 for loss, an interception, two pass break ups, three more passes defended, and a forced fumble.  None of those stats really jump out at you individually, but his stat line illustrates just how versatile and well rounded he is just past the midway point of his freshman season.

Smith’s head coach has taken notice to how special of a player Smith is for Notre Dame already.  “He’s very important to our defense. He sets the edge of our defense, which as you know is so important in the 3-4 defense,” said Brian Kelly on Saturday night following Notre Dame’s 14-10 win made possible by a dominant defensive performance.

Kelly talked a little bit about just how much Smith is asked to do for the defense as well.   “He’s athletic, great interception. He’s playing man to man coverage down the field on a pretty talented player. He’s bringing pressure. He’s a pretty special player. Not a lot of guys like that in the country as true freshmen.”

That interception Kelly referenced is the kind of interception that not many Notre Dame linebackers over the last twenty years or so were capable of making.  Smith dropped back into coverage and made an outstanding play on the ball in the air.  Notre Dame hasn’t had another backer who could make a play like that since… well since maybe never.  Manti Te’o racked up gaudy interception totals last year, but the majority of his interceptions were made in zone coverage as opposed to plays where he was asked to play man coverage on an athletic receiver.

Smith is also just scratching the surface of his potential for Notre Dame and has a lot of room to improve.   “Zone coverage he continues to learn.  He’s had a mistake here or there in terms of zone fits.  That’s why we put a little bit more man with him.  He’s still learning there,” Kelly admitted the day after Notre Dame’s third win in the last four years over arch rival USC.

Kelly later added that even though Smith still has room to grow, he is playing and improving at an impressive pace.  “We love the curve that he’s on.  I think every day’s a learning experience for him, every game that he plays, he picks up the nuances.  The big picture stuff he’s grasping very well.”

With the responsibility of setting the edge for the defense, these next two weekends will be a huge test for the freshman with Air Force and Navy’s option offenses on tap for the Irish back to back weeks.  This weekend will especially be a tough test for Smith with the Irish traveling to the high altitude of Colorado Springs – a tough task for any true freshman still getting used to the physicality of the college game.

So far Smith hasn’t done anything to suggest he won’t be up for the test.  If anything, Smith’s performance against Arizona State where he made several athletic plays on the perimeter of the defense suggest that Smith could excel for the Irish the next two weekends.  If he did, it would surprise no one just like it won’t surprise anyone if he’s mentioned in the same sentence as Manti Te’o many more times over the course of his career when people discuss the best linebackers to ever play for the Irish.