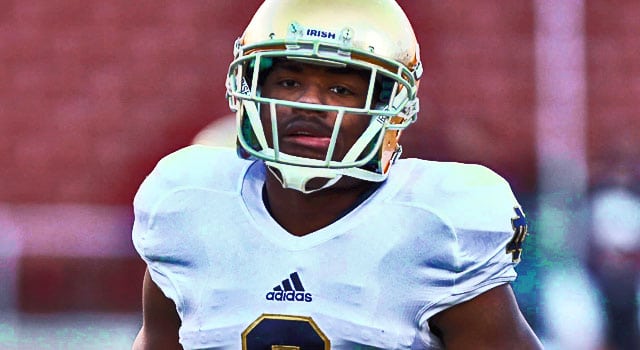 Ah, the ebb and flow of college football. One month removed from Notre Dame quarterback Everett Golson disclosing his intention to transfer from the program, former starting cornerback KeiVarae Russell announced his return via his Instagram account. And while it is never easy to lose a one-time Heisman candidate to defection, the addition of Russell back into the fold could very well have the larger impact.

KeiVarae was on a trajectory to stardom heading into the 2014 football season. Russell, a former 4-star recruit from Everett, WA was recruited by Notre Dame head coach Brian Kelly as a running back. Once Kelly was able to observe the athleticism, toughness and unbridled confidence that radiated effortlessly from the young freshman in person, the notion of a career on offense ended before it even began.

Russell was moved to cornerback where he made an instant impact, helping lead Notre Dame to a BCS National Championship appearance his first year on campus and snagging Freshman All-American honors along the way. His sophomore season in 2013 saw him making a leap in status from an up-and-coming talent to the precipice of being one of the nation’s best cornerbacks. Russell closed out the 2013 season with an interception and three pass breakups in the New Era Pinstripe Bowl against Rutgers, a performance that was building significant buzz for his junior season in 2014 – a buzz that included being named to the Bednarik Award watch list, an award given annually to the nation’s best defensive player regardless of position. That buzz would never materialize, as KeiVarae would miss the entirety of the 2014 season due to an academic investigation. His return will inject much-needed athleticism to a defensive unit that struggled last season.

KeiVarae is a lockdown corner who is physical, quick, and possesses the kind of bravado necessary to thrive at the position. Russell will likely be paired with fellow cornerback Cole Luke, a player with relatively little experience who stepped in for the absent Russell in 2014 and thrived. In last year’s contest against Stanford, Luke went toe-to-toe with Cardinal wide receiver Ty Montgomery – a third round NFL draft selection of the Green Bay Packers – and managed to tally four tackles, two interceptions, a sack and a forced fumble all while limiting Montgomery to 12 yards receiving.

Russell and Luke, who have the potential to be one of the best one-two cornerbacks in the country, will be joined by two safeties yet to maximize their potential. Max Redfield was a 5-star prospect with a bevy of elite scholarship offers coming out of high school and has all the physical tools to be an elite safety. Similarly, Elijah Shumate, a physical safety with a reputation as a hard-hitter, has shown flashes of his ability but has struggled with consistency, although Kelly teased a watershed moment during the spring practice session.

“We don’t see the missed assignments,” Kelly told the media. “Their [safeties] development is clearly evident and so much different than where we were at this time last year or anytime during the season.”

If a breakthrough is transpiring for Redfield and Shumate, Notre Dame’s secondary could completely transform the Irish defense. One of the less talked about aspects of the 2014 Notre Dame defense was its inability to generate an effective pass rush. Defensive coordinator Brian VanGorder’s squad finished with a middling No. 63 ranking nationally in sacks, trailing programs such as Western Michigan University, Texas State and Appalachian State. Without a proven pass rush, VanGorder will have to develop creative methods to getting to the quarterback, and a strong secondary provides such a platform.

An important element to blitzing is the ability to play man coverage, which is a difficult coverage to sustain without cornerbacks talented enough to take away an opposing offense’s best wide receivers without the benefit of safety help. KeiVarae Russell and Cole Luke have such ability, which will provide VanGorder more freedom to blitz and apply additional pressure to opposing quarterbacks. Given VanGorder’s history of tutelage under mentor Rex Ryan while VanGorder was the linebackers’ coach for the New York Jets, an array of complex, confusion-inducing blitz schemes might be enough to significantly improve Notre Dame’s ability to create negative plays this fall.

KeiVarae Russell is the kind of talent that is hard to come by. For Notre Dame fans, it might be best to savor the reunion while it lasts. Should Russell have the kind of season he was expected to have in 2014, the NFL will do its best to make the reunion short-lived.

Scott Janssen is a blogger for the Huffington Post and has authored several nationally-featured articles, including an appearance on MSNBC as a sports contributor. He also talks football 24 hours a day, much to the chagrin of his wife and those around him. Scott can be reached at scottjanssenhp@gmail.com or follow him on Twitter.