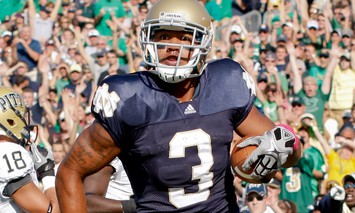 All signs continue to point to Michael Floyd, shown here in 2010 game action, being reinstated for his senior season at Notre Dame.

For weeks now all signs have been pointing to Michael Floyd suiting up and not missing any games for Notre Dame due to his spring arrest for driving under the influence and on Monday there was more evidence supporting that indication.

According to a report from the Chicago Tribune, Brian Kelly is “very optimistic” that Floyd will take care of everything he needs to take care of in order to satisfy the requirements Kelly put in place for Floyd to be reinstated for his senior season.

“He’s still actively involved in doing the things he needs to take care of,” Kelly said. “He’s finishing up some community service work, he just turned that in. He’s got some work to do on some other personal issues. But he’s making good progress. I’m very optimistic right now.

Last week Kelly cleared Floyd to participate in voluntary team workouts and conditioning training and we learned that Floyd is expected to entered into a plea agreement possibly as soon as the end of June.  Both of these developments led many to believe that Floyd was on course for being reinstated and today’s tidbit from Kelly only further backs that up.

Kelly hasn’t backed down from his all or nothing stance on Floyd at all.  Floyd will either meet the requirements he was given for reinstatement and play every game, or he’ll miss the entire season if he slips up just once or fails to take care of everything he needs to.

The last major hurdle for Floyd could be the plea agreement as there is no way Kelly would reinstate the star receiver before his legal matters are taken care of.   The original report about Floyd entering into a plea in June mentioned the date of June 28 as a possible date.  That would be weeks from yesterday and a month before Notre Dame begins fall camp.

Floyd still has some work to do in order to be on the field on September 3rd against South Florida, but for now it still appears Floyd is headed on a path that leads to his reinstatement for the 2011 season.