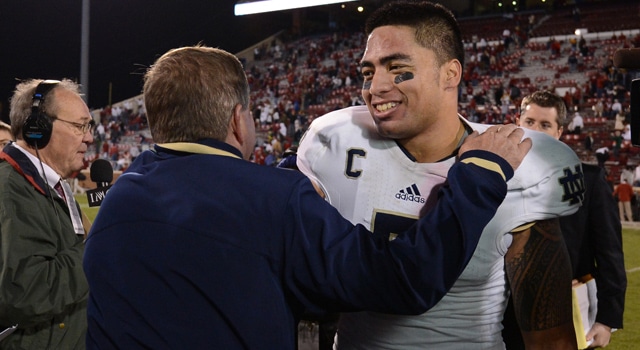 When Brian Kelly was hired to replace Charlie Weis as the head coach for Notre Dame three years ago, one of the biggest concerns many Notre Dame fans had was his ability to recruit nationally against elite programs.  Three years later Kelly has Notre Dame ranked #1 in the BCS standings and the current recruiting rankings for the class of 2013.

So much for those concerns.

Kelly has shown that he and his coaching staff are top notch recruiters by nabbing elite talents like Stephon Tuitt, Gunner Kiel, Aaron Lynch (even though he didn’t last long), Ishaq Williams, and Davonte Neal over the last few recruiting classes.  They have only backed up their recruiting prowess in a big way this year with the #1 ranked class in the country thanks to recent commitments from Max Redfield and Tarean Folston.

While all of the star rankings, team standings, and recruiting evaluations have been better than anyone could have expected, Kelly’s most vital recruits will already being playing the last games of their collegiate careers already on Monday and Kelly was coaching at Cincinnati when both signed their letters of intent to play for Notre Dame.

Those recruits are captains Tyler Eifert and Manti Te’o.  The recruiting job that Brian Kelly did last January to get both of his senior captains to return for their senior seasons when both could have left early for last April’s NFL Draft is just as impressive as the work he and his staff have done in building this year’s #1 ranked class.

Getting both to return to South Bend laid the groundwork for Notre Dame’s 12-0 regular season and their first berth in the BCS Championship game.  Without Te’o the Notre Dame defense would have still been pretty good, but not as special as it is this year.  There was a lot of young talent on this year’s defense and those younger players needed a leader. Te’o was perhaps the best leader of a defense we have ever seen at Notre Dame.

Without Eifert, the Notre Dame offense would not have survived early on in the year without the security blanket he gave to both Notre Dame quarterbacks.  His returned allowed for Kelly to play musical quarterbacks early on while Everett Golson got his feet under him as a starting quarterback on the college level.

This wasn’t the first time Kelly was able to get a star player to return to South Bend when it looked like they were going to leave for the NFL either.  In 2011, Michael Floyd looked poised to leave for the NFL, but ended up returning for his senior season thanks in part to Kelly.

One could argue that these players didn’t all receive the NFL Draft grades that they were hoping for and that was the impetus for their decisions, but that would be selling Kelly and the job he has done in changing the culture at Notre Dame since his arrival very short.

Compare the returns of Efiert, Te’o, and Floyd to the early departures of Jimmy Clausen and Golden Tate who both left early after Charlie Weis’s final year despite  being selected in the 2nd round of the draft and potentially benefiting from a return for their senior seasons.  A NFL culture existed at Notre Dame because that was part of the sales pitch that Weis used, and used effectively at times, in his recruiting efforts.

That hasn’t been the sales pitch for Kelly and his staff though and the result is a program that has a rock solid foundation right now with a pipeline of highly rated recruits flocking to South Bend – a place that many have said is impossible to recruit elite talent to on a consistent basis.

Kelly and his staff have hit the internal recruiting trail hard once again this year as well.  Last month left tackle Zack Martin and nose tackle Louis Nix both decided to come back for another year despite having the ability to leave for the NFL.  Their returns, much like Te’o and Efiert’s return this year, will lay the groundwork for another potential BCS run next year.

Not every player will come back for their senior seasons.  For instance, it looks like Cierre Wood is likely headed to the NFL based on most reports even though he claimed at the BCS Championship Media Day that he has yet to decide.  In Wood’s case though, he is a senior already this year on schedule to graduate so he won’t be leaving early, rather he will just be leaving some eligibility on the table should he decide to pursue the NFL sooner rather than later.

There will also be cases where a player is just so good that they risk too much coming back for a 4th or 5th season.  Stephon Tuitt comes to mind next year.  Tuitt is a flat out beast and another season like he had this year in 2013 will likely make him a top 10 pick in the 2014 Draft.  If and when that happens though, that is actually a great problem to have.  It means that the recruiting Kelly and staff are doing to get kids into the program and the coaching they are doing once they are at Notre Dame is producing elite NFL prospects.

What is clear, however, is that the NFL culture that Charlie Weis used to his advantage in recruiting has been removed by Kelly as he has built the Notre Dame program back up in his image.  That culture, along with recruiting he’s to bring in and keep talent in South Bend have the Irish poise for a run of success after this year and beyond.