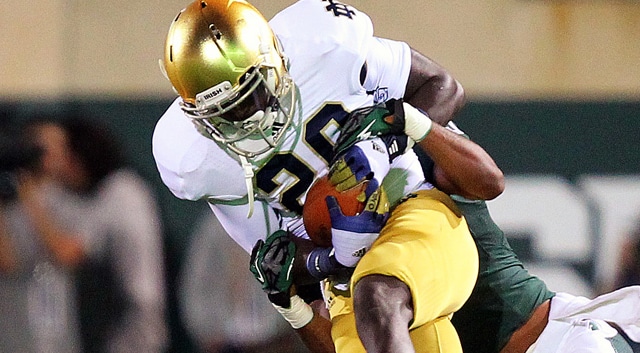 Heading into their annual Shamrock Series game the Irish are 4-0 and ranked ninth in the nation. Despite the high ranking and undefeated record the Irish have plenty to improve on if they hope to defeat this week’s opponent Miami. The following are the matchups Notre Dame must win in order to knock off the Hurricanes at Soldier Field.

The Irish running backs have struggled to impose their will versus opposing defenses thus far this season. The Irish have only recorded two rushing touchdowns in the last three games and often find themselves rushing for a yard or two a carry, with big gains being few and far between. In Miami the Irish will face a defense struggling mightily to stop the run. The Hurricanes are giving up an average of 225.6 yards rushing per game, and have surrendered 14 rushing touchdowns so far this season. The Irish must increase Cierre Wood’s involvement in the rushing attack this week. Wood has recorded only 17 carries in his two games this season, far less than a premier back should receive. Wood possesses the best chance to gash the Hurricanes weak run defense for big gains and subsequently increase the struggling offenses production.

In Duke Johnson the Hurricanes possess a true game- breaking talent. Johnson has totaled 920 all-purpose yards to go along with seven touchdowns through five games. Johnson has rushed for 359 yards this season on 6.9 yards per carry due in large part to his breakneck speed. Manti Te’o will be charged with the responsibility of shutting down Johnson for the Irish. Te’o has played lights-out football for the Irish thus far earning him a spot in the Heisman Trophy conversation. Te’o’s two best games this season came in similar situations where he was charged with shutting down the opposition’s central player, La’Veon Bell and Denard Robinson. The Irish will need another great effort from their defensive leader as Johnson is yet another gifted backfield player that Te’o must shut down this season.

Stephen Morris versus the Irish Secondary

In Stephen Morris the Irish will face the most prolific passer they’ve seen so far this season. Morris threw for 566 yards last week versus NC State, and 436 yards the week before in a comeback win over Georgia Tech. Morris has also yet to throw for less than 200 yards in a game this season. In contrast the Notre Dame defense has only allowed 715 yards passing this season despite the inexperience of the secondary. Morris makes a great deal of his plays rolling out, so it will be of paramount importance for the young Irish corners to stay with their man/in their zone and not be swept up in the chaos of Miami’s up-tempo offense. Morris will be another stiff test for the ever-improving Irish secondary, a test they must pass as the Miami offense has scored over 35 points in four of its five games and is capable of putting up points in a hurry.

One of the main reasons the Irish offense has been stagnant is the lack of big plays from Tyler Eifert. Opposing defenses have been choosing to take Eifert out of the game with double and sometimes triple coverage in an effort to make another Irish receiver beat them. Eifert has recorded nine receptions for 158 yards and a touchdown this season, but has only recorded one reception in each of the last two games.

The Hurricanes will likely matchup their senior corner Brandon McGee with Eifert. McGee has recorded 20 tackles, three pass breakups, an interception, and a fumble recovery this season. McGee is a big corner at 6’0’’ 197 pounds so he won’t be extremely undersized compared to other corners when matched up with Eifert and is also in his second season as a full-time starter, so he doesn’t lack in experience either. Eifert will need to find a way to beat man to man coverage in the rare event he faces it as well as find room to work against double teams in the middle of the field in order for the Irish offense to be successful this week.