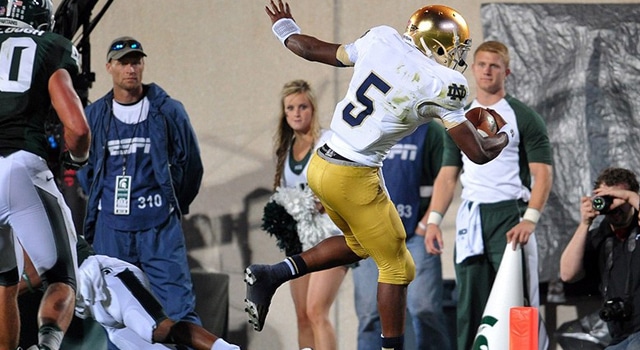 Notre Dame has lost to Stanford the last three years while being tormented by Andrew Luck.  Luck is throwing passes on Sundays now, but snapping the Cardinal’s winning streak will take a little more than the luck of the Irish this weekend.  Here are the keys to victory for Notre Dame against Stanford.

Get Everett Golson on the move

For the first time this season, Brian Kelly and Chuck Martin let Everett Golson run the ball on some designed runs and zone read plays.  Making some plays with his legs appeared to let the sophomore quarterback settle down some and as a result he had his most efficient day passing the football as well.  Just like Notre Dame will want to pressure and confuse Nunes, Stanford will be looking to do exactly the same to Golson.  If the Cardinal defense gets too aggressive and over-pursues  some running lanes could open up for Golson to exploit.

When Golson was on the run last week he also just looked faster and quicker than he did earlier in the season when he wasn’t as comfortable.  Last week though he was light on his feet and made Miami defenders miss with some nifty moves.  I don’t think Golson needs to carry the ball 10 times for the Irish offense to move the ball, but if he can pick up another 50-60 yards like he did last week, Notre Dame should score some points.

Get after Josh Nunes early and often

Stanford quarterback Josh Nunes has had an up and down year in his first season as the starting quarterback for the Cardinal. He led Stanford to a win over USC before playing poorly on the road in a loss to Washington only to follow that up with a 360 yard performance against Arizona last week.  The Washington game is Nunes’s only road start this year so that could bode well for the Irish, but the Notre Dame front will still need to get after Nunes to rattle him a little because if they let him get comfortable, he could easily ride the success he had last week to another strong performance.

Bob Diaco will need to find ways to get pressure on Nunes without blitzing too much because doing so could open up the passing game to Stanford’s talented tight ends.  The Irish were very successful earlier this season as creating pressure with their front line before last week so hopefully they can get back to that this weekend.

I’ve been saying for weeks that Cierre Wood needs to be running the ball more.  Last week Wood ended up with the most carries among the Irish running backs after Theo Riddick was lost with an injury, and he responded with his first 100 yard game of the season – an 18 carry, 118 yard, 2 touchdown performance.  Through three games this season since returning from his suspension, Wood has run for 213 yards on 35 carries for an average of 6.1 yards a run.  Riddick meanwhile has carried almost twice as much, 68 attempts, but has gained just 50 yards more.

For Notre Dame to be successful tomorrow against a pretty good Stanford defense, Wood is going to need to run the 20 times and make the most out of each one of them.  Then, once the second half rolls around and the Cardinal defense is just a bit slower, bring in George Atkinson III and go looking for the home run.  Atkinson’s speed is second to none in the Irish backfield and can be exploited tomorrow afternoon for some more big plays.

With College Gameday in town, midterms, and all of the hype that is building around this team, it would be very easy for the distractions to get the better of a young team.  With all of the veterans on this team, however, that shouldn’t be the case this weekend.  Call me jaded though, but I can’t help to think back to last year’s USC game when the stars looked like they were aligning for Notre Dame to make a statement that it was headed in the right direction only to see the Irish take a big step backward by coming out flat.

Midterm weeks have historically been rough on Notre Dame – especially when Stanford has been in town (see ’90 and ’92) – and Notre Dame’s record when Gameday is on campus is just 3-4.  Add all of that up and there are a lot of off the field issues working against the Irish this weekend.  It’ll be up to Brian Kelly and the senior leaders on the team to make sure the Irish are focused on nothing but improving to 6-0 on the season.

With two strong defenses and two offenses lef by young quarterbacks, the field position battle is going to be key to winning tomorrow.  Notre Dame needs big plays from its special teams units to reverse field position when possible and will need a big game from Ben Turk to set up Stanford with some less than favorable starting positions.

Notre Dame’s return units have been severely lacking this season thus far.  It would certainly be nice to see them step up and make an impact tomorrow.