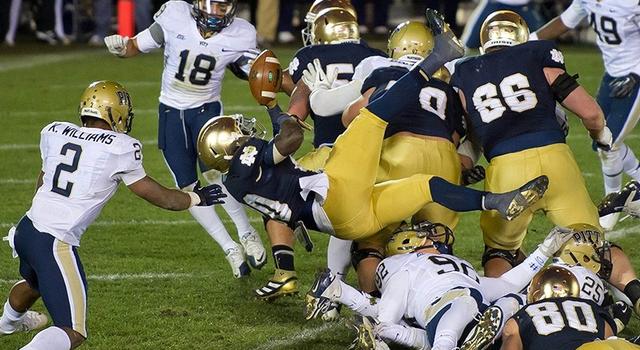 After arguably playing their best game of the year against Oklahoma in Norman, the Irish turned around and played possibly their worst 3 quarters of the year against Pitt a week later at home. A defense that was consistently recognized as one of the top five defenses in all of college football was gouged consistently by Pitt running back Ray Graham. Graham turned in a career day rushing for 172 yards and 1 touchdown on just 24 carries and a whopping 7.2 yards per carry average. While you let those numbers sink in a bit, you need to also realize that Grahams best game to date(109 yards-5.7 ypc-2td’s) was against a weak Temple defense that is allowing a over 162 yards on the ground this year. The Irish also lost the all important battle of turnovers being kind enough to give the Panthers the ball 3 times in the form of 2 interceptions(1 in the end-zone) and 1 fumble at the goal line by Cierra Wood. So an Irish squad that has been exceptional at taking the ball away, and taking care of it reverted back to the same problems that plagued the squad in the 2011 season, at least for one game.

Now that being said if you didn’t watch the game and read the paragraph above, a person would certainly get the impression that the Irish lost on the scoreboard also – which thankfully for Irish fans is not the case. As this team has showed all year long, they have a hardened resiliency and a mental toughness that very few teams have at the college level. They have faced adversity both on the field and off all year long, and have found a way to stand strong and overcome almost every obstacle in their way. The Irish also accomplished something on Saturday that has not been done since 1993 by a Notre Dame football team, and that is going 9-0 on the season. Also noteworthy is that while the Irish struggled mightily stopping the run, they did hold Pitt 5th year quarterback Tino Sunseri to just 164 yards through the air, which is almost 100 yards less than his season average.

On the offensive side of the ball very few people would deny that the Irish didn’t dominate the Pitt defense as they racked up over 520 yards of offense. Everett Golson played a phenomenal game throwing for 227 yards and 2 TD’s , and 74 yards on the ground while also scoring the game winning TD.  He consistently created space all game long and found a way to prolong plays and provided his receivers the time to find open space in the field. The most significant of those plays being late in the 4 th quarter when Golson seemingly danced around the pocket forever allowing DaVaris Daniels to break past the defense and catch a 45 yard strike at the 5 yard-line. Some will bring up the interception that he threw in the end-zone just the drive before that almost cost the Irish the game, but keep in mind that Golson is still just a Sophomore and 1st year starter. His ability to make the right decision and read defenses is still a work in progress and fans and media need to keep this in mind.

The bottom-line is that every great team has a game like this during the year, and every championship caliber team finds a way to win them. Coach Kelly will use this game as constant reminder of what happens when you start reading press clippings, lose focus, and stop doing the things that have made them successful all year long. We would imagine that the week of practice leading up to the Boston College game will be focused on getting back to fundamentals and playing within your game and trusting your teammates. Although the Irish did fall from #3 to #4 in the BCS standings, it doesn’t matter. All the Irish need to do is focus on the upcoming game against the Eagles at Alumni Stadium, as most Irish fans remember what has happened against Boston College the last two times that Notre Dame has played them late in the season while being undefeated.