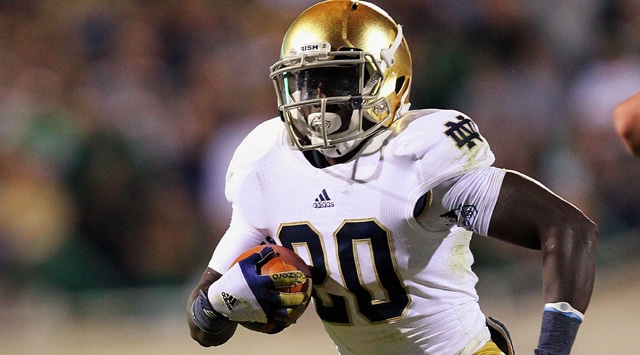 Little late this week, but here are 5 things I liked from this weekend’s victory over Michigan State.  We’ll have the 5 things I didn’t like from the game tomorrow before moving on to Michigan.

The Return of Cierre Wood

Theo Riddick and George Atkinson III filled in admirably for Cierre Wood while he served his two game suspension to start the season, but it was very clear to me on Saturday night that Wood is the best running back on this team by quite a bit.  Atkinson has a very bright future, but isn’t where Wood is right now and Riddick just doesn’t have the same burst or acceleration that Wood possesses.

The are where Wood really separates himself from the other Irish running backs right now, however, is in his vision. Wood makes some runs that the other backs can’t because they don’t have his acceleration but he makes some other runs that they don’t have the vision to make either.  Wood really has developed well over the last three years and with him in the backfield the Irish running game should be much better off.

The Poise of Everett Golson

You wouldn’t know that Everett Golson was making his first start for a night game on the road by the way he handled himself and commanded his offense on Saturday, but that is exactly what he was doing.  Golson’s numbers were not impressive and he missed a number of throws that he will eventually start making when things slow down for him and he is more relaxed in the pocket, but for a young quarterback, he never let the situation take control of him.

Night game, on the road, top 10 opponent, in a place where Notre Dame has struggled for years and Golson went out and managed the game very well.  He didn’t force anything and above all else, he protected the football.  He nearly had one pick after getting leveled and having a ball float on him, but other than that, he was very careful with the football and as a result, Notre Dame has just 2 turnovers this year as opposed to 13 after 3 games a season ago.

The Improvement of the Irish Secondary

The Navy game in week one had many Notre Dame fans, myself included, extremely worried about what might happen once the Irish played teams with potent passing attacks.  While they have yet to face an elite quarterback or receiver, the young Notre Dame secondary has improved each week including this most recent weekend when Kei’Varae Russell, Bennett Jackson, and Elijah Shumate all stepped up and turned in fine ballgames.

This young secondary will continue to be tested now that Jamoris Slaughter is out for the year with an Achillies injury, but in limited action Matthias Farley has played pretty well and looks to have a very bright future.  Still, with Farley in as a starter, 75% of Notre Dame’s secondary will have been originally recruited to play on the offensive side of the ball.  For now though, the young secondary is passing the test and that’s about as good of a scenario as we could have hoped for given the inexperience and injuries in the defensive backfield.

The Inspired Play of Manti Te’o

Manti Te’o had every reason to be anywhere but East Lansing, Michigan inside Spartan Stadium after the emotional week he endured off the field, but Notre Dame’s All American captain didn’t want to be anywhere else.  After a week in which he lost both his grandmother and his girlfriend within a 24 hour period, Te’o was suited up and ready to play Saturday night.  And play he did.

Te’o was his normal, disruptive self and was once again the leader of an Irish defense that simply shut down the Michigan State offense, making them scratch and claw for every yard.  Te’o ended the game with a game high 12 tackles and picked up his second fumble recovery of the season (and his career), but it was his reaction to the win on the sidelines and in the locker room video that really stood out.

Notre Dame may have had some players with more talent than Te’o, but I think anyone would be hard pressed to find another player that stood out as much as Te’o has both on and off the field during his time in South Bend.  Enjoy the next 10 games of Te’o’s career because it’s likely we won’t see another player quite like him pass through Notre Dame again for a long, long time – if ever.

The Coaching of Brian Kelly and Staff

Notre Dame still has a long way to go before anyone can definitely declare that “Notre Dame is back” or that there is another “Return to Glory”, but the coaching job done by Brian Kelly and his staff – most notably Bob Diaco and the defensive coaches – was absolutely outstanding this past week.  From Chuck Martin’s continual work in developing Everett Golson to Harry Hiestand’s ability to get his offensive line to regroup after a rough, rough outing against Purdue to Bob Elliot and Kerry Cooks’ preparation of all of the young defensive backs who have been thrust into prominent roles – all of the Notre Dame coaching staff deserve a lot of credit for the win this past weekend.

As for Kelly specifically, he not only did a great job of preparing his team and having them pumped up for a night game in a hostile environment, but he managed the game really, really well.  Some of the play calls he made were some of the best we have seen out of him during his 2+ years on the sidelines.  Kelly has this thing headed in the right direction, there is no doubt about that.  Having it headed in the right direction and actually reaching the end goal he has Notre Dame headed to are two entirely different matters, of course, but so far this year he and his staff have done a terrific job.

Other Things I Liked