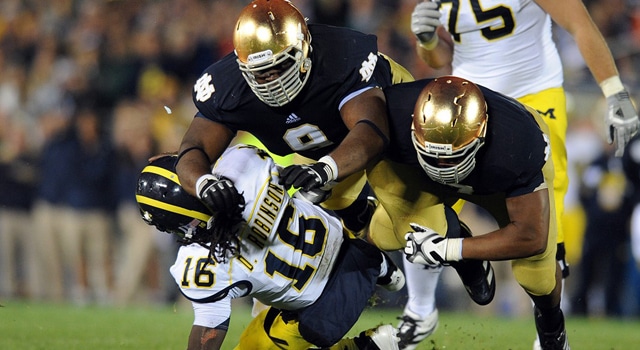 Notre Dame defensive linemen Louis Nix and Stephon Tuitt are racking up pre-season accolades as the pair of linemates prepare for what could be there final campaigns as members of the Fighting Irish.  The recognition is not a result of publishers wanting to sell more magazines to the hordes of Notre Dame fans either, Nix and Tuitt are deserving of any and all hype they receive this summer.

Justin Tuck comes to mind, but he graduated nine years ago.  Anthony Weaver, the last first round draft pick along the defensive line for Notre Dame? 11 years ago.

Bottom line is, Notre Dame hasn’t had this much talent along the defensive line at the same time in a long, long time.  Nix and Tuitt will be entering their second full season as starting linemates this year.  Nix started as a redshirt freshman in 2011 while Tuitt got his feet wet as a true freshman.  Last season though, the two started next to each other and thrived as the Notre Dame defense completed the transformation from punching bag to knockout puncher.

When Bob Diaco brought a 3-4 defense with him to Notre Dame, it became imperative that the Irish have an anchor in the middle of the defense at nose tackle and Louis Nix has filled that role about as well as anyone could have.  Nix took some time to get his weight under control and improve his conditioning as a freshman, but since then, he has been a beast in the middle of the Irish defensive line.  Last year the Florida native collected 50 tackles to lead all Notre Dame defensive linemen along with 7.5 tackles for loss, 2 sacks, and 5 pass breakups.

Nix’s full impact is not felt through his own impressive statistics.  It’s felt in the stats of other players actually.  Nix’s presene in the middle of the defensive line made it possible for Manti Te’o to be the force he was a year ago.  Nix occupies multiple blockers every play allowing the rest of his defensive teammates to make plays which is exactly what you want from a nose tackle in a 3-4 defense.

Without Nix in the middle of the defense, Te’o most likely would not have been in New York as a Heisman finalist and Tuitt likely doesn’t pick up the 12 sacks he did in 2012.  That’s not a knock on either of two of Notre Dame’s other stars from the 2012 defense at all either – it’s more of a testament to the impact Nix makes on the Notre Dame defense.

So far this pre-season Nix has been named a 1st team All-American by Lindy’s, Phil Steele, and Athlon Sports.  Sporting News named Nix a 2nd team All-American as well.  What they were watching last year that didn’t prompt them to place Nix on their 1st team I just don’t know.  Perhaps they haven’t seen his ability to play on the offensive side of the ball or his skill as an entertainer last year in Miami.

One beneficiary of Nix’s presence at NT for Notre Dame is a guy who lines up right next to him.  Junior Stephon Tuitt looked primed to take down Justin Tuck’s single season sack record in 2012 with a torrid start of harassing opposing quarterbacks.  In his first season as a full-time starter though Tuitt slowed a little but at the end of the season and came up 1.5 sacks short of Tuck’s record with 12.

As Tuitt enters his junior year at Notre Dame both the single and career sack records are well within his sights.  If Tuitt improves slightly on his sack total from last year he could eclipse the mark Tuck set in 2003.  Tuck’s career record of 24.5 sacks is well within range for Tuitt this year as well if he stays healthy.  Including the 12-pack of sacks he picked up last year, Tuitt has 14 career sacks meaning he needs just 11 sacks this year to pass Tuck on the career leaderboard as well.

Assuming he stays healthy, it would be shocking for Tuitt to find himself anywhere but #1 on the career sack leaderboard and it would not surprise anyone if he took down the single season mark as well.  Of the 12 sacks Tuitt had in 2012, 8.5 came in the first seven games with just 3.5 coming over the final six.   most notably, Tuitt did not record a sack against Oklahoma, USC, or Alabama over that stretch.

Tuitt might receive some more attention this year given the hype as well as the loss of Kapron Lewis-Moore to graduation so just how quickly Sheldon Day makes an impact on the other side of the defensive line will impact Tuitt’s performance, but even with increased attention, Tuitt is the type of elite pass rusher that will still pick up more than his fair share of sacks – especially with Nix lining up side by side with him.

Lindy’s, Phil Steele, and Athlon all have Tuitt as a 1st team All-American just like Nix, but unlike Nix, Tuitt also found himself on the 1st team for Sporting News’s pre-season list as well.

Notre Dame lost the most decorated defensive player in the history of college football with Te’o playing for the San Diego Chargers in 2013, but Nix and Tuitt are sure to pick up their fair share of hardware and accolades by the end of 2013 and their presence along the defensive line will also allow the Irish defense to replace such a decorated athlete without missing much of a beat this fall.