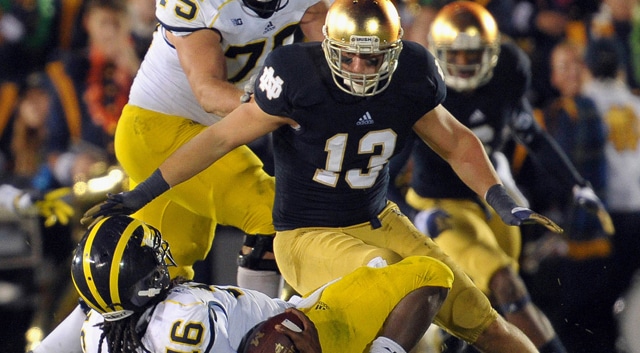 The Irish are 5-0 and find themselves ranked seventh in the AP and coaches polls after their 41-3 domination of Miami. The following matchups will be crucial for the Irish as College Gameday and the Stanford Cardinal visit South Bend.

The much publicized key to the Stanford offense is their group of experienced and talented tight-ends. Stanford’s leading receiver is 6’6’’ tight-end Zach Ertz with 21 receptions for 316 yards and two touchdowns. The team’s second leading receiver is also a tight-end, in 6’8’’ senior Levine Toilolo, with 13 receptions for 278 yards and two touchdowns. The size of Stanford’s tight-ends presents matchup nightmares for opposing defenses, especially in the red-zone. The Irish possess the size at linebacker to battle the tight-ends in the run game and get off blocks, but the will need every bit of the improved pass coverage of Manti Te’o, as well as the steadiness of Dan Fox, and Danny Spond to limit the damage the tight-ends can do in the intermediate passing game.

Manti Te’o is having a brilliant start to his senior season for the Irish. Te’o either leads or is tied for the team lead in tackles, interceptions, fumble recoveries, breakups, and pass deflections. However, Te’o will have to continue his quality play as he’ll find himself matched up against another talented running back in Stepfan Taylor. Taylor is Stanford’s leading rusher with 560 yards and five touchdowns, 483 yards more than the next closest player for the Cardinal. Taylor is a powerful runner and will attempt to wear down the Irish defense behind his big offensive line and tight-ends. Taylor has also chipped into the Cardinal pass game as he has tallied 82 yards receiving on 15 receptions.

Cierre Wood announced his presence as the Irish’s number one running back in Saturday’s 41-3 victory over Miami. Wood rushed for 118 yards versus Miami and shouldered the brunt of the load with 18 carries. Woods output versus the Hurricanes was impressive, but he will face a much more stout rush defense this week versus Stanford. The Stanford defense is led by elite linebacker Chase Thomas. Thomas leads the Cardinal in tackles with 31 and is tied for the lead in tackles for loss with six. Thomas is a punishing hitter and will challenge Wood’s toughness on runs in between the tackles. It is critical for the Irish to establish Wood on outside runs early in order to make Thomas chase him in open space.

With Stanford likely devoting their number one corner Barry Browning to the group effort that is shutting down Tyler Eifert, TJ Jones will see a lot of Wayne Lyons. The Irish must find someone to step up and replace the production of Eifert and in doing so free up space for the all-American tight-end to make plays. TJ Jones is the best option to fill that role for the Irish. Jones has the most starts this season among Irish receivers with three and is second on the team to Theo Riddick in receptions with 15. Lyons is a talented sophomore who has played in all five games for the Cardinal this season. He is a tall corner at 6’1’’ and has recorded 15 tackles this season. Jones is the Irish’s most game experienced receiver and will be relied upon to be in the right positions to make plays for the Irish with Eifert seeing extra attention.